More than a week has passed since I witnessed one of the greatest battles I’ve seen in movies – a battle between a student, aspiring to be the best, and a teacher, bullying his way towards hearing perfection. There was tension, there was false hope, crushed dreams and crushed fingers, rude words, harsh words and fake kind words, unbelievably evil mockery and verbal abuse, just because there are no two words in the English language more harmful than  “good job”!

When my initial plan was to enjoy Whiplash and its two, widely praised performances, it was misleading and instead, I was completely crushed by the time the movie ended. Crushed not by the words nor the mental torture, crushed not by the fact that the student never stopped trying to win the teachers affection. Whiplash crushed me because a tiny part of me understood the need to be the best, the need to be better than everybody else and that brought up unexpected emotions.

Andrew (Miles Teller) is a new student in one of the best music schools in the country, he is also a drummer who’s potential is noticed by the most prestige teacher in the school, Mr. Fletcher (J. K. Simmons). Pushing his students to their limits is an understatement for Fletcher, and Andrew pushing himself to his limits is also an understatement – they are, in a very sadistic way, similar by having the same idea of perfection. For audiences this perfection might even seem like an illusion, something that is there for Fletcher to abuse his students with and for Andrew, blinded by his possible success, to reach after. But it’s not until the very end that we witness this masterpiece and realize, even if we have no musical talent or know nothing of jazz, that two people, who hate each other, can find that perfection and achieve mutual respect through music.

That is the essence of Whiplash, the master and the student finally, through tears and blood, find respect for each other. It’s almost cruel in a way because Mr. Fletcher has all the elements of a perfect villain and as a viewer, you are programmed to hate him which is why it might seem hard to understand Andrew and his need to find Fletcher’s approval. With Andrew’s father being the opposite to Fletcher, their family dinner on the other hand, clearly indicates that not many consider Andrew’s talent a talent. So making Fletcher into a father figure, and trying to find his affection takes over Andrew and he becomes addicted to the idea of being the best drummer.

Miles Teller gives another astonishing performance and not just in emotional moments but also, in moments of exhaustion and most importantly, in his scenes where he is playing the drums! There have been endless musical movies where actors are simply acting and more recently Chloe Grace Moretz was noticeably just a floating head while playing the cello in If I Stay. Drumming being literally the center of attention during 80% of the movie meant a great deal because if it did not feel real, Whisplash would have set itself up for a failure. Luckily, Teller was already familiar with drums and, after months of learning jazz drumming (different from rockn’roll drumming), felt very comfortable behind the set.

Surrounded by people who were familiar with drums, the director Damien Chazelle and more importantly, a fellow actor, Nate Lang as Carl, Teller never failed to impress. There was a millisecond of error I noticed, where the beat was faster than the actual drumming (a visual mistake that could’ve been avoided in editing), but after that, I was perfectly convinced by Teller. In the final scene of Whiplash, honestly it’s strongest and most powerful moment, Miles Teller killed it and though there is award worthy praise for J.K. Simmons, Teller is equally amazing for an upcoming actor dipping his toes into some serious acting for the first time.

J. K. Simmons has never been in the spotlight. He has only received multiple ensemble nominations and one nod for playing the charismatic father of Juno but that’s about it for this acting veteran. This will soon change because his role as the most vile and horrific music teacher Mr. Fletcher will soon earn him deserving nominations and wins left and right. Simmons is beyond amazing in Whiplash, beyond what I had expected because at the end of the movie, I not only felt satisfied about Andrew’s but also for Fletcher’s success. And to deliver a mean character, a complete asshole, by saying insults that are downright awful, but still find compassion from the viewer, now that’s acting!

It’s indescribable why Fletcher’s character finds compassion from me, but I think it’s partially because the director/writer Damien Chazelle created Whiplash to show how evil can manifest into greatness. Sure, praising one’s work is awarding and I think compliments are elementary to any student’s progress but there’s just something about pushing through shit and coming out as a winner, that makes me wonder. The most infamous quote from the movie, there are no two words in the English language more harmful than  “good job”, and the context it’s in and how it is delivered by Simmons, makes so much sense if you think about it and it’s damn right scary!

If Fletcher would have praised Andrew, if he would have said all the nice things instead of all those bad things, Andrew would have not pushed himself to his limits. We find out in the end that a student of Fletcher pushed himself so far he took his own life, and there are moments in the movie where you feel like Andrew has reached his but he pushes on and beyond. He doesn’t let Fletcher win, he takes the victory he deserves and in the end they smile at each other because Andrew realizes he wouldn’t have achieved perfection without Fletcher. And if perfection can be achieved like that, well, then perfection is the true villain of Whiplash. 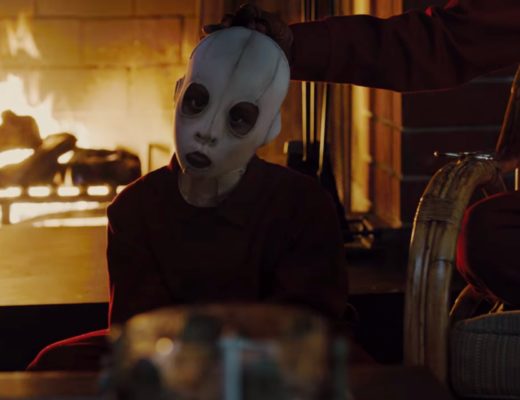