Though I should really narrow down the list of classics I have on my list (for BOT), I can’t hold back the need to criticize Upside Down like there’s no tomorrow. Before I saw it, I thought, well, I’m sure it’ll be better than the fourth Die Hard (according to IMDb) but as soon as the movie’s intro began, I knew I had made the biggest mistake ever. The torture, the pain, the clichés – and all of that in 3D!

What pains me the most is the fact that this movie was so bad that I don’t even know where to begin. Should I start with the immensely idiotic beginning, the unbelievable acting by Jim Sturgess or should I  go straight for the throat and call the whole plot a parade of stupidity? Oh, the choices, the choices – sometimes I just wish a movie could be so horrible that I won’t have any words, so far, no such luck. I think the reason why I find Upside Down little bit reviewable is the fact that the whole context of double gravity for a sci-fi enthusiast is rather compelling. The problem is how they decided to show it – as a fucking romance disaster! Why take a relatively interesting idea and then make it all about love is beyond me and I just don’t get it.

Another thing I never seem to understand is the usage of narration to set up the plot of the movie. To be fair, it almost never happens in the movie world because it is the worst thing one could do with a movie but Upside Down decided that Sturgess narrating in the beginning is a delightful idea. Then the whole plot of the movie was described, there were these pink bees and stuff. Yes, pink bees and no, I don’t want to discuss that further. Then, as far as I can remember, I really didn’t pay much attention to the movie, they thought that using the narration in the middle and in the end would tie things nicely together. Well, at least they were consistent with their stupid choices.

In regards of the plot, Sturgess was playing Adam who was an orphan with a living aunt – why he lived in a orphanage and not with his aunt is a msytery – and that aunt happened to know the secret of the pink bees. Now, why those bees had to be pink, I have no idea but apparently they took the flower dust from both worlds in different gravity zones. Which is because there were these two planets on the same orbit but with different gravity pulls – interesting context but then Eden (Kirsten Dunst) just had to fall for Adam and Upside Down had to become a love-story. Anyway, Adam lived on the poor planet and Eden on the rich one, they met on a very high hill and both of them seemed to be very resistant to the immense winter/storm winds around them. Plus, they seemed to be able to climb seriously high mountains as kids without any equipment. Long story short, they fell in love, had sex while twirling around in 0-gravity and Eden told Adam she was expecting twins.

Now, a lot of other stuff happened in the middle. Adam being all up in the science and Eden suffering from amnesia which seemed to disappear right after meeting Adam though she had no recollection of her entire past for almost 10 years. I guess their love was so strong it cured permanent brain damage. Since Adam was working in this government building, that was literally built between the two worlds, he had to visit the upper world, where things from the other world will obviously burn. Interesting enough, nobody ever caught him and for a building that clearly had a security system, having security cameras was just too much! Oh, and of course Adam gained a friend from the upper world who happened to be the bad guy Timothy Spall from Harry Potter which means I never trusted nor liked him.

Visually, as it was 3D and all, I must say Upside Down had its moments. But to be fair, most movies nowadays are visually beautiful and the current problem is literally making everything else as good as the CGI stuff. (One of the outstanding scenes was where Adam jumped in water from one planet to another but that was about it for the entire movie.) Including choosing the right actors for the roles because Jim Sturgess had no business in that movie. He looked like he always looks, rugged and like a shaggy dog or something. Certainly it suits some of his roles but when an office lady described him as cute I laughed out loud and the lady next to me gave me a weird look. Dunst was okay but for an actress who has tackled some very dramatic and intense roles, this was a step backwards for her career.

Finally, why and how has Upside Down a 6.3 score on IMDb? I mean, sure, the context where this love-story takes place is rather interesting and the visuals uplift the movie, but there’s nothing else that makes sense in Upside Down. There are big wholes in the story, the way the premises is explained through narration, the stupidity that comes across from every scene and the fact that the movie really never answers anything – where and why they took the aunt?  Upside Down is not a good movie and though hate is a strong word, I’m gonna go for it anyways: I hated this movie. 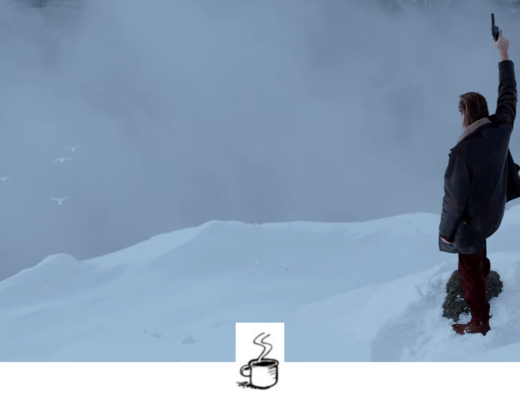