This week’s theme is like scrolling through Twitter and stumbling on a pervy tweet. Meaning: there’s a lot to choose from! And honestly, I had a hard time narrowing down a theme with this one. Luckily, I’ve trained myself well. This week’s TV shows based on books are inspired by one common theme – CRIME! Added similarities between the recommended shows are: 1) all three shows have ended, 2) I’ve watched at least 7 seasons of each of them, and 3) I’ll never read the book(s) their based on. Narrowing them down this much proves my first point – there are a sh*t ton of shows based on books! 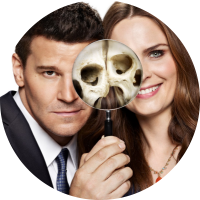 Let’s throw it back first. Bones was THE show back in 2005. I watched it religiously and loved everything about it. There was crime solving, weird murders and a quirky main character. Plus, to my utmost lovesick brain back then (and let’s face it, now as well, though it has evolved to more raunchy pastures), the will they won’t they was like a drug! But like every show that goes beyond 6 or 7 seasons, things get a little dull after a while. So I stopped watching but I still have fond memories about it. 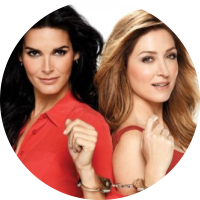 With a much shorter run, and a more successful one in my opinion, Rizzoli & Isles combined police work and medical examining. We have two very strong female characters, who have a wonderful friendship. They also solve crimes, which for me is an added bonus. The show also features many great supporting characters, especially Rizzoli’s mom – who is portrayed flawlessly by Lorraine Bracco. Season 4 was probably the hardest for the fans to watch, because Lee Thompson Young who played Barry Frost, took his life during the filming of said season. Season 5 follows with a heart breaking episode titled “…Goodbye” and I think I’m crying again… 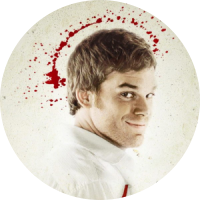 During the height of crime shows, Dexter arrived like a breath of fresh air. It took a completely different approach to crime –  by having the main character be the criminal! It kind of started its own trend of antiheroes taking over the television screens. Which I didn’t mind at all! Dexter is probably the strongest of the three because it’s the heaviest and most serious. And if anyone has seen it, just close your eyes and try not to remember one of the cleverest intros to a show! It was so good I always watched it and never got tired of it. Now that I think about it, I have a deep urge to rewatch Dexter..  just so I could witness this again.