An isolated house in the middle of nowhere. A boy and a mother occupy it. A man visits them to ask  the boy history questions. If the boy gets it wrong, the mother gets punched in the face by the man. The man fucks the mother, the boy builds a snowman before sneaking back into the house to hear his mother threatening to tell this man’s wife and kids that the boy is his. The man flees. The boy cries after him. The mother and boy follow in their Volvo. A long driving sequence. The mother gives up somewhere during this long driving sequence. She lets go of the wheel, the car cruises onto a lake. The boy pulls the hand break. The car stops, the ice breaks. The boy gets out, the mother stays in the car. The boy watches close by while the car vanishes and the mother drowns. I wish the boy would have drowned too. Cause then he wouldn’t have grown up to become the Snowman killer and I wouldn’t have had to sit through that awful movie following that actually interesting opening scene.

Before I get to the hate part of this review, and trust me, there will be a lot of hate, I want to say this. I loved the fact that The Snowman was filmed in Norway. The nature locations looked fabulous! I’ve been to Norway myself and even though I’ve only witnessed its beauty during the summer, it was amazing to see the winter scenery in this film. The indoor sequences were a bit less impressive but I didn’t hate them either. I think my lack of thought towards it also showcases the fact that I think not much care went into the creation of the atmosphere in this film. Then again, not much care was shown to every other aspect of this film either, so I’m not surprised.

Most of you know that my favourite crime thriller is Zodiac, which among many of my other favourite crime thrillers is directed by David Fincher. So you can imagine that my expectations for thrillers are quite high. I expect such things as intriguing characters, interesting conversations, a great mystery and discovering the glues alongside with the protagonist(s). None of these things were met by The Snowman, and that is just the commentary towards the script. What made the movie even worse was the lack of integrity towards the material from the director and the sloppiest editing job I have seen since Suicide Squad! And frankly, considering the type of movie The Snowman is supposed to be, I’m willing to say its editing job was actually worse than Suicide Squad’s.

A movie with such high caliber names (behind and in front of the camera) couldn’t be this bad, could it? But apparently, it can. There are already bad reviews floating around, and the director has already jumped on the defense-wagon. Tomas Alfredson stated that the filming period on location was too short and they didn’t manage to film up to 15% of the script. There were also some reshoots and additional shooting which took place a year later. He credits the bad editing job to this fact, and making it sound like it was sloppy because the film had a short prep time and they didn’t manage to film parts of the script. Now, I’m an understanding person, so I get Alfredson’s point but that still doesn’t excuse the following:

There is a scene in the beginning of the film where we meet Harry’s ex-girlfriend’s boyfriend for the first time. He sits down, the ex-girlfriend goes to get hot-dogs, Harry complains he can’t sleep, the new boyfriend is apparently a doctor because he offers Harry a prescription for sleeping pills. My mind goes – doctor, access to pills and all sorts of medical equipment, wants to keep Harry medicated?, looks shady, close to the investigation – I bet he’s the killer. Plot twist, HE WAS! And no, I didn’t figure it out because I’m clever, I figured it out because all the facts were delivered all at once. Plus, the actor who played the killer looked like a creep, acted like a creep, and well, the entire movie did an amazing job at not directing our attention to anyone else either. And the entire movie is JUST SO OBVIOUS that I wanted to yell at the screen.

The movie tried though, but I mean, the sheer lack of care towards building tension and possibly diverting the viewer was actually hilarious. Example. There is a scene where Harry walks back into his apartment, infested with mold as we found out earlier, and the guy in his protective suit and mask is dancing TO THE SAME TUNE THAT WAS JUST RECENTLY PLAYING IN A SCENE AT A HOUSE WHERE THE LAST HEADLESS VICTIM WAS FOUND. HARRY TURNED THE MUSIC OFF HIMSELF YET Harry has no recollection about the same tune (very distinctive and rare tune btw), throws a chair at the guy and yells GET OUT. The guy leaves and, in front of the SAME BUILDING HARRY LIVES IN, walks past another guy WHO WE KNOW AS THE ORIGINAL MOLD REMOVAL GUY! We had literally 15 seconds of wondering whether the mold guy was the killer before the movie was like, nope, here he is holding a cat while the REAL KILLER WALKS BY! Besides, how the fuck is Harry fucking Hole a detective if he literally throws the killer out of his apartment while the same VERY RECOGNISABLE AND SUPER FUCKING ANNOYING TUNE from A VERY RECENT CRIME SCENE is playing on the background!?  HOW?! Please, somebody, explain to me, how a protagonist whose cases ARE BEING STUDIED AT THE POLICE ACADEMY doesn’t even, I don’t know, CONNECT THESE TWO MOST FUCKING OBVIOUS GLUES LITERALLY BEING BLASTING THROUGH THE SPEAKERS!? WHAT THE ACTUAL FUCK! 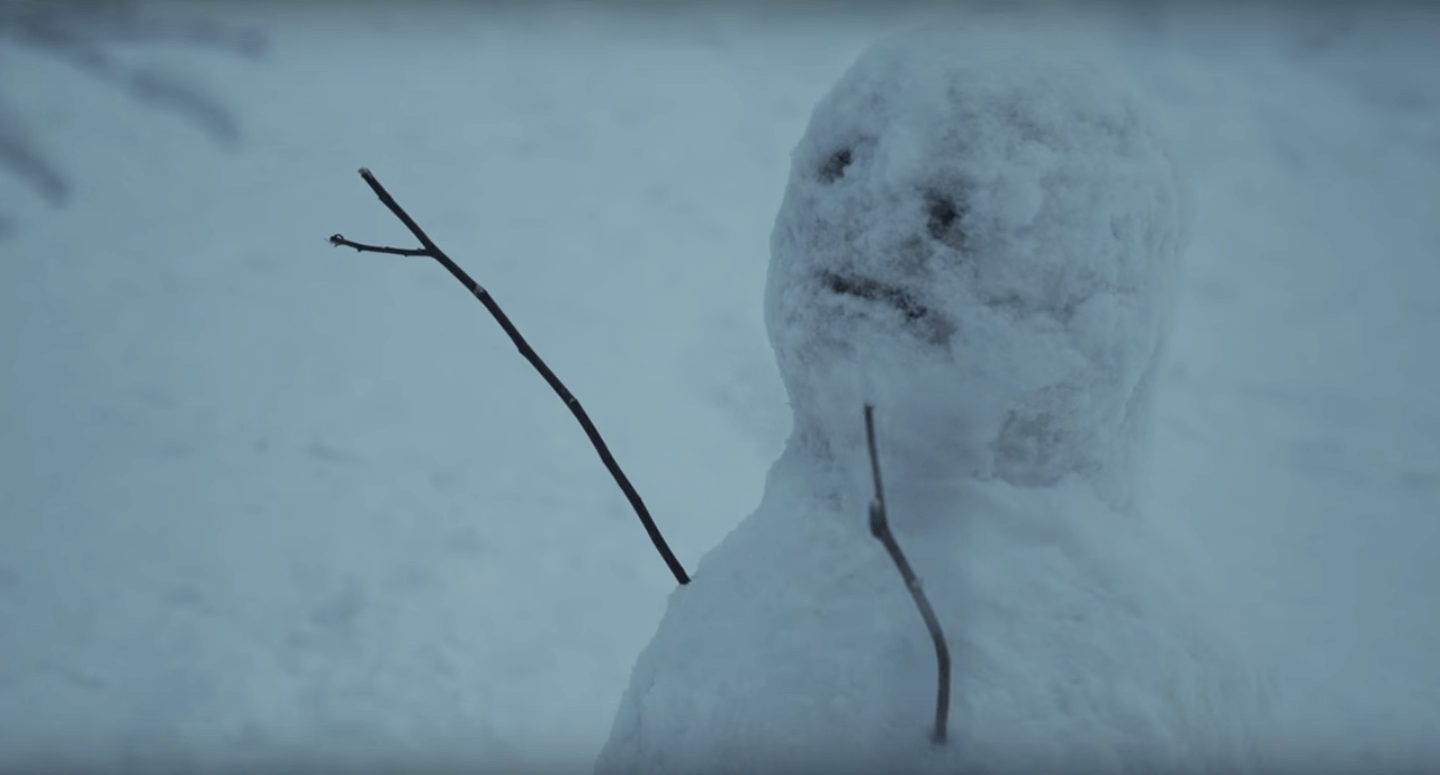 And from that moment on, I was angry. I felt like The Snowman didn’t even expect me to have a brain at this point. Here are ton of glues, here, a suspect, no, he just likes cats. Oh look, Harry doesn’t get it either, it’s not that obvious, it’s okay. So in other words, with an excuse like “having limited amount of time to film the whole script”, I immediately think how the fuck did you manage to show so much if you didn’t even have time to film all of it? Was the rest of the script filled with EVEN BIGGER GLUES?

By the time the final act started, I had no interest in the ending. I wanted to go home, and leave it at that. But oh boy, if I had left, I would have missed the most anti-climatic ending to a crime thriller I have ever seen! There is a very uninspiring first confrontation in the killer’s childhood home, but the main “showdown” happens outside. So Harry is on this lake, killer’s mom DID not die on this lake by the way, they drove like tons of miles away from the house in the beginning of the movie to get to THE lake. In other words, this is just A lake. Anyway, Harry is on A lake, yelling, come and get me, gets shot, is bleeding, the killer is now walking towards him across this lake (how Harry did not see him before is not important because I will lose my shit if I think about that moment any longer). Killer approaches, slowly, step by step, Harry notices something, Harry is not afraid to get shot in the head, killer takes another step not noticing Harry’s obvious glances at the killer’s feet, Harry says something meant to be profound, killer takes another step and falls into a hole in the ice. Drowns. Riveting stuff. Couldn’t write this shit any better myself.

Now, I wouldn’t want to trash The Snowman further, but I feel like everyone involved with this film had their part to play in its awfulness. So.. about the actors.. well the actors didn’t really… act. From the first scene to the last, I cared for absolutely no one in this film. Not a single character. I didn’t feel remorse for the child characters, didn’t connect with the female lead portrayed by Rebecca Ferguson, and I sure as hell didn’t want to root for Harry Hole (Fassbender). Sure, you could say the root of the problem stems from the script, and that the direction was off too, but it felt like the entire cast was uninspired. Hell, the womanizing Arve Stop played by J.K. Simmons had the most charisma of the entire cast, and he didn’t get much screen time to begin with! All of it was just so bad..

Fassbender proved again that he doesn’t know what to do when he is not brilliantly directed. And his brooding looks definitely won’t help him out of this hole either. There is a scene in this movie where Harry goes into this basement, finds a little girl in a donkey mask (her mother has just gone missing) and he starts making these loud animal noises!? WTF MAN!? I would have ran out of that fucking room as fast as I could! Fassbender or no, I would have been so freaking scared of a strange man entering the basement through a backdoor while hee-hawing like an ass!! And that’s just the tip of the iceberg. There is a scene where Ferguson’s character meets Hole in a diner, and he shows her a cut up sausage – imitating crime scene photos in a cold case he stole from her bag. Her response? No emotion. The scene ends. Nothing happens. And the movie is filled with these scenes, scene after scene there’s nothing there, no emotion, no intrigue, no character development, no angst, no desperation, no devotion, no aspiration, no nothing. There’s just…

There is a scene where Harry is riding the public transport while eating ice cream. It’s the middle of winter. I don’t know about you, but eating ice cream outside in the middle of winter is stupid. It’s so stupid that I wouldn’t have filmed it even if the scene desperately needed a prop to fill the emptiness it was showcasing! Better empty that empty and stupid. But the whole movie is filled with these useless scenes, these “atmospheric” content building sequences, and it’s all bullsh*t. So I’m sitting here and thinking, how did this movie even get past the editing board because I would have not wanted, as a director, as an editor, as a producer, to show this mess to anyone! We live in a world where TV shows are blowing our minds with mysteries and thrilling investigations, and somebody thinks The Snowman will suffice? I have seen Criminal Minds episodes that are better than this movie, hell, even Riverdale is constructed more interestingly as a mystery thriller than The Snowman!

Taking into consideration everything I typed here, I’d like to end on a more positive note and dedicate this final paragraph to support someone linked to this movie. Because as bad as The Snowman was, I have to give credit to Val Kilmer for powering through a horrible illness, which clearly left its mark on him, and delivering a solid performance! His character’s arc was the only thing that felt finished, and polished, and I wish him all the best and I hope to see him soon on a big screen again!