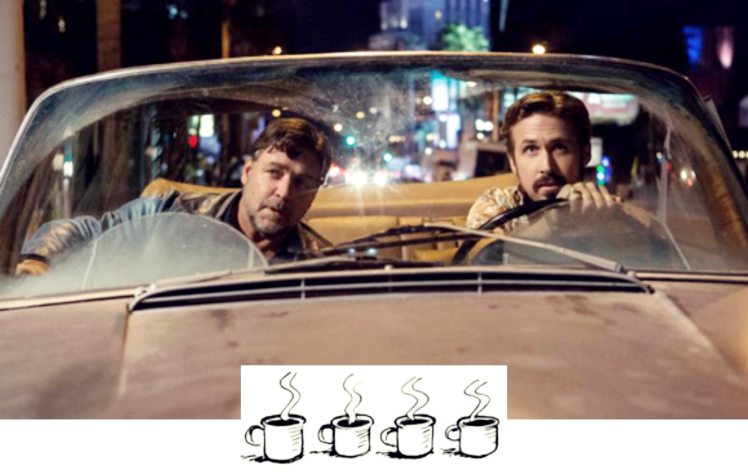 Alright, it is time to discuss The Nice Guys. And most of my thoughts are nice, some are not so nice, but all in all, the feeling after the movie was indeed sort of nice.

A little more than 10 years ago, Kiss Kiss Bang Bang came out and became Shane Black’s directorial debut. Since Black was already known for writing the Lethal Weapon trilogy, Kiss Kiss Bang Bang showed that he can do both. And though he was also behind the third Iron Man, Black’s strength lies with his own special style, that stood out in Kiss Kiss Bang Bang and shines in the 70’s inspired The Nice Guys.

Now, I’m a little weird and I will state that I liked Kiss Kiss Bang Bang a little bit more. There’s no special reason behind it, it is what it is, and maybe it’s nostalgia that tips the scale towards Robert Downey Jr rather than Ryan Gosling. But maybe it is the crazy whirlwind of a plot that makes Kiss Kiss Bang Bang stand out, while The Nice Guys has more power behind the performances, than the story itself.

While the common problem of movies being a tad bit too long is becoming my frequent argument against movies, I’ve decided to look past it for The Nice Guys. Because the longer the movie, the more we get to see Ryan Gosling as Holland March, and all of it is worth it because of him! Russell Crowe’s Jackson Healy isn’t as effective, but as a duo, they work well, and that’s what matters at the end of the day. And the young Angourie Rice as March’s daughter was a nice compliment to the male duo. The fact that Matt Bomer was the villain was great, but his character needed more funk, or just more screen time, or just something special to be more memorable.

Anyway, I saw The Nice Guys two weeks ago, and the story has become a little vague in my head. This is why I said The Nice Guys isn’t as much about the story than it is about the characters. The dynamic relationship between March and Healy is the highlight, the crime driven story not so much, but honestly, Gosling and Crowe do enough to elevate the movie on their own. But to be completely honest, Gosling does most of the elevating, and he proves here, that he is brilliant as a comedic character actor! More Gosling in comedies please, yes, thank you!

Finally, I just want to point out that my initial thoughts on the movie were a lot more positive than the outcome of this review. Therefore the rating is good, yet the thoughts maybe not so much. Yet, I can see this movie improving after repeated viewings for many, but not for everyone. That being said, I think Gosling’s work here is too good to just experience once, and for the sheer enjoyment of him finding a body, The Nice Guys deserves a second viewing.