This here is a spoiler alert.

The hardest thing is to dislike a movie you love… sounds confusing and trust me, I myself am confused as well. Everything in relation to The Maze Runner is pretty much unclear to me, except the fact that I love Dylan O’Brien as Thomas. So, while I have issues with the book and with the movie, I can’t find myself to not like the movie because of my own personal high expectations set on the dystopian genre… or can I?

Before I packed my suitcase for my holiday, I had finished half of the book and watched the movie knowing, that it will never live up to the amazing first half of the book. Then, on my holiday, I finished the book and was smacked in the face with the most idiotic things since sparkling vampires. I was pissed, I was robbed from a great ending and then it dawned on me, I was comparing the book ending to the movie ending and I was suddenly forced to split my opinions in two ways. On one hand, the book had a better build up to the story, and on the other hand, the movie improved the horrid ending of the book by a mile!

Now comes the challenge, how do you rate something that improved a book!? I’ve experienced many book to movie adaptions, especially in the teen genre, and usually the book does it better every single time! There is something about a book that somehow delivers emotion in a way that it’s hard to convey on screen. A lot of it has to do with the first person writing where the reader is following the inner thoughts of the leading character situation to situation, moment to moment and since voice overs rarely work out in movies, are hard to translate. That is the situation where The Maze Runner fails, especially in the beginning because it doesn’t manage to convey the confusion, anger and mistrust Thomas feels in the first chapters. That, and the movie took many liberties in the beginning of the story to mix things up and many of the situations didn’t really improve anything in my opinion.

But speaking of improvement, the second half of the movie stepped up and left out things that would have been a disaster! For all the book readers out there, who have read The Maze Runner, I don’t know about you but I hated the telepathic conversations Thomas and Teresa were having! Every part of my existence hated that part of the book, actually, to be honest, I hated the book since Teresa’s character woke up – that was the point where everything became a mush of awful word vomit. I don’t want to sound like I hated the entire book because of it but I did hate the final chapters. Those who might argue that I liked the movie ending more because I had it in my mind before finishing the book, yes, that could be a reason but I don’t think so – I really, truly, genuinely hated the telepathic aspect of the book that much! 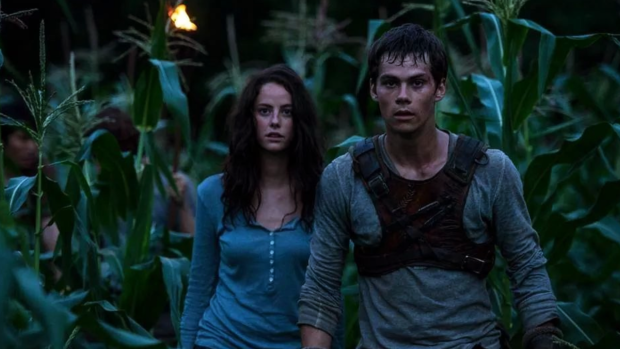 So, the current situation is tied, 50/50 between the book and the movie because I’m conflicted and can’t really rally up the thoughts to put one of them into first place. Except that one thought.. that one thought most of you can’t seem to understand and I’m not even going to defend myself in regards to that specific thought because I’m speechless when it comes to Dylan O’Brien. There, I said it, I’m a total teenager minus the posters and magazine cutouts on my walls but I can’t help it. O’Brien is good, at least I think so and he does so well as Thomas in The Maze Runner that it’s hard not to like him! He does what he can with the given material, he nails every emotion, especially at the end, when he looses his closest friend Chuck. Was he perfect? Who knows, maybe not but I’m not going to fault him because I like him and end of argument!

But I’ll say this, the other guys were just as good! The kid from Love Actually (I should really learn his name) who portrayed Newt was the other delightful sight on screen. And considering the book, his casting was a brilliant choice, just like all the other decisions. All black kids from the book were black, the Asian was Asian, Chuck was chubby as he was supposed to be and Teresa looked like she could’ve used a big meal (man, that girl is skinny). It was very true to the book characters and it’s a plus, especially when the movie takes many turns to alter the plot, some of which aren’t as needed and others saving the entire storyline falling into a pit of horrid clichés. Another true to the book element that sort of highlighted the strength of the book, was the Glade and the Maze around it.

Now, that was probably the part that highlighted the movie as well as the book so well that nothing else really matters in the end. The human designed system of a safe heaven for teenage boys surrounded by an unsolvable and ever changing maze, that is guarded by robot-alien-spiders, is a great idea! I’m a dystopian junkie, I love all those alternative societies with rules, traditions and laws outside the norm of what we think is humane and meaningful. It sort of tests the human nature as well as the concept of logic when it comes to teenagers especially because I’ve yet to stumble on a dystopian novel that writes about grown ups. (If you know of one, please lead the way, I’d be interested to read that). Anyway, I’m supposed to talk about the set and the true to the book interpretation of it in the movie – which was, for me, almost perfect!

Granted, the basic idea of it was good to begin with, it would have been extremely difficult to ruin my excitement in regards to the whole build up of that world. Compared to my favorite set design in relation to this, The Hunger Games: Catching Fire’s clock dome, the Maze and the Glade are clever in their existence, except that Cliff thing in the book which, yet again, was something that the movie did luckily not include. So the premise gets a thumbs up because the ultimate twist of it all being a scientific experience works wonders. Dylan O’Brien is delightful! And most importantly, the opening scene is definitely one of the good ones out there!

Therefore, with a little love and granting the movie a high rating because it actually improved the book in my eyes, I’m sort of content with The Maze Runner. Yes, it has flaws, and yes, it doesn’t allow to connect to the characters on an emotional level but it is a decent action movie for teenagers.. mostly girls who are fascinated by Dylan’s arms but I’m guessing there’s a lot of us out there. Though I’m not a teenagers, technically.