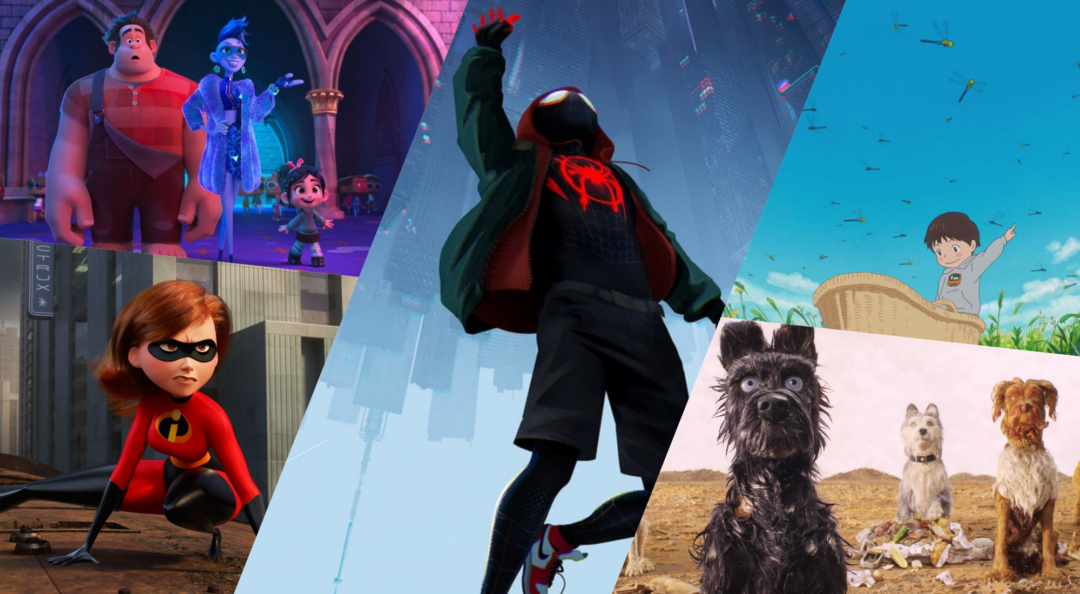 With the inevitable doom approaching* , I sat down to look more closely at the Best Animated Feature Film category. Just like last year, I picked a category I feel the most passionate about. And with this year’s dramas (around so many of the big categories), animated feature films seemed like a safer way to go.

I didn’t get the memo to love Incredibles as a kid. I saw it, I liked it, I sort of forgot about it. Which is probably why it’s sequel didn’t land on my nostalgia cords and I wasn’t overly eager to see Incredibles 2. That being said, this is a solid story! It feels very much like the first one but it stands strong on its own. The plot is rich with content and the characters feel like they’re evolved and evolving. With many sequels you feel almost as if the second movie wants to do the same thing as the first but that’s not entirely the case here. Although the vibe is the same and the incredible feeling is the same – there is a lot of growth in here as well. Brad Bird waited for a long time to come out with a sequel and he did a great job with it.

I feel like stop-motion animation is an instant love for me, even if I’m not into the story that much. There is just so much work that goes into these types of animations! The people who build the mechanics, the ones who draw the puppets and the ones who make them, the ones who make the clothes, the hair!!, the set, the animators who work on one scene for months! Just based on that, I’d give Isle of Dogs all the awards because I know how much they worked for it. But as far as Wes Anderson‘s movies go, he’s done better. Which is why I’m slightly less enthusiastic about the story and more thrilled about the work.

Alright, I’m cheating with the next two nominations because I haven’t seen them! But since I’m fairly certain neither of them would beat my main argument for my favourite nominee, I’m not worried. Mirai seems like a lovely Japanese animation by Mamoru Hosoda. He has done quite a few, which I have not seen, but all of them seem well loved. This one has a sci-fi element to it, which I always gravitate towards. So I’m 95% sure that when I do watch it, I would like it very much. But would it bring something new and fresh to the table in terms of animation? Probably not.

Again, I have not seen this one but I’ve seen Wreck-It Ralph, so that’s almost the same. It’s not really. But since I wasn’t, again, a huge fan of the first movie, I don’t see myself being in love with this one either. There was a lot of buzz around the fact that it featured all the Disney princesses which was cool. But I feel like that fact and Wreck-It Ralph really don’t mesh. At least in my head. Plus, I’ve heard from a trustworthy source, that it’s not better than the first one. That, and the fact that I think Phil Johnston and Rich Moore definitely didn’t trump their own Zootopia with this one, Ralph won’t be taking the golden statue. Zootopia by the way, amazing!

SPIDER-MAN: INTO THE SPIDER-VERSE

In case you were still unsure which was my number one pick from the list, this is it. Into the Spider-Verse was amazing! I saw it on a big screen and I wish I had time to see it twice. There is so much going on in this, and yet, it never feels messy – the story is clear and the direction is solid. Why I think this film directed by Bob Persichetti, Peter Ramsey and Rodney Rothman deserves the Oscar the most? It’s because you can pick Spider-Verse out from a lineup within a second. It’s style, vibe and concept is so different from all animations I’ve seen! While the rest of the animations (in this list) rely on the same framework and look like animations that came before them, Spider-Verse is just chilling in in its own little animated universe! The fast editing, the colours, the comic book vibe – it’s all amazing. So all that’s left to say is that: give Miles Morales an Oscar, he definitely should and will win!

* I called the Oscars the approaching doom in the beginning because isn’t that what it’s going to be this year? With so many controversial conversations around it, with categories pushed into commercials, it sounds like a disaster. Who’s even hosting? Oh that’s right, they don’t even have a host! I don’t really have the time to get deeper into the mess of a show the Oscars are going to be this year but I know it’s going to be bad. I haven’t watched the show for years because it’s always on so freaking late and I can’t be bothered. But now, I won’t even have to feel guilty about not watching.

3
Incredibles 2Isle of DogsMiraiOscarsOscars 2019Ralph Breaks the InternetSpider-Man: Into the Spider-VerseThe LAMB
8 Comments
By MettelRay