I’ve always struggled with expressing my love and admiration towards things I love. Being critical is always somehow easier and I guess that’s why this is the first time I’m writing about Sound of Metal on my blog. Yes, my 2020 favourite movie and I haven’t mentioned it once here on Mettel Ray. I’ve praised it on Letterboxd though, so at least there’s that. But today I wanted to devour this Oscar nominated movie for Lamb and see how far I can go with praising Sound of Metal.

Sound of Metal is a story of a heavy-metal drummer Ruben who starts to lose his hearing. Despite the warnings from his doctor Ruben decides to continue playing drums because that’s what he loves. While playing one particular concert he suddenly realises he has gone deaf. The sound of the drumming, the sound of his girlfriend Lou singing, the crowd cheering – it is all gone. His life starts to unravel and those around him are worried.

Ruben has not only lost his hearing but also his career. His girlfriend is worried for him because Ruben is also a recovering drug addict. As Ruben realises his fate he zeros in on getting cochlear implants but the problem is money. While Ruben struggles with everything around him, buzzing with anxiety and fear, his sponsor finds him a rural shelter for deaf recovering addicts. Sad thing is his girlfriend Lou is not allowed there and she leaves.

The heavy burden of life suddenly falls into a rhythm. Ruben starts learning sign language, participates in activities, eats dinner with everyone there and tries desperately to cling to his former self. Meanwhile he is holding on to the hope of being able to hear again and dreams of the implants. But will he find solace in his new silent reality or will he unravel as the heavy burden of silence falls upon him?

For me the beauty of Sound of Metal is its whole package. I cannot fault this movie even if I tried, I really can’t. All its elements are there, all of the pieces fit and work harmoniously together. It is art! So when taking about Sound of Metal it’s hard to focus on one thing only but I shall try to pick a few things that really stood out. (Since I’m also devouring the director’s category for Lamb I’ll skip director Darius Marder completely.)

The biggest strength of this movie is Riz Ahmed! This man is so good, I actually have no words. Riz is an actor who I’ve kept an eye out for a while. I loved him in Nightcrawler and I full on fangirled over him in The Night Of… His ability to commit into a role is breathtaking. Yes, I could go on and say that Riz learned to play drums and he learned ASL but that’s just the tip of the ice berg. His performance feels so raw and authentic that it’s really just magical. One of the biggest obstacles Sound of Metal faces here is trying to portray a man going deaf. Of course Riz can still hear but he maintains a level of honesty that makes you believe everything he goes through on screen. There are many moments of silence here and in those moments we “hear” what Ruben “hears”.. and it’s just silence. And I believed it, not just because of the sound design but because Riz gave such a truthful performance.

So I briefly mentioned sound. But I need to clarify that not just the presence of sound but also the lack of. It’s no surprise that the movie got nominated for Best Sound, an award it for sure needs to win. The sound design here is superb because this is a movie that benefits from it so much. I haven’t seen a movie where sound design is so strongly connected to the main character or all the characters really. And the cinematography is just as gorgeous, adding another extra layer of brilliance to this amazing movie.

I could probably go on and praise this movie for ages but I don’t think there’s a point to that. Everyone should see and hear Sound of Metal for themselves. It’s important not just because it’s an award movie but it is also a movie about a community that often feels and actually is excluded from society.

Many deaf actors and actresses had a role in this movie. Oscar nominated Paul Raci, while not deaf himself, comes from a deaf family and has used ASL his entire life. Lauren Ridloff is also deaf and gives a heartwarming performance as Diane. The movie also includes Shaheem Sanchez, Chelsea Lee, Joe Toledo, Hillary Baack and many more. 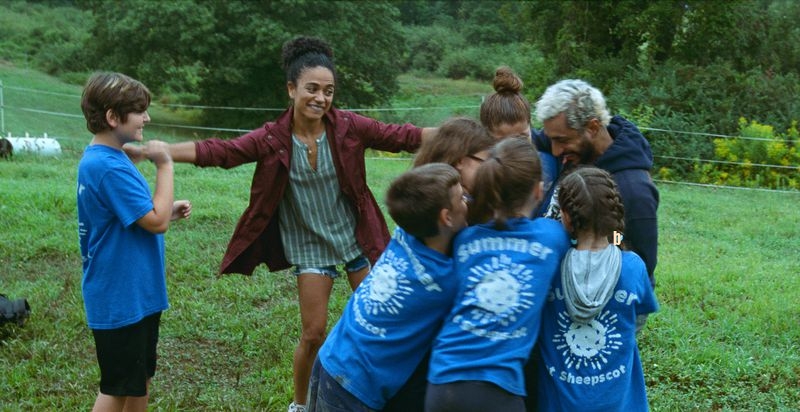 For these actors Sound of Metal is very important. Chelsea Lee herself has said that movie does something special here by not making deaf characters about their deafness. They are just human and that is how we should perceive them. Something that everyone of us should do on a daily basis anyway.

Finally I quickly want to mention that my love for this movie doesn’t only exist in the duration of the film itself. It goes beyond it. It goes beyond me. Because it’s also the reactions the movie has gotten that makes me love it. This is not just a movie for award shows, this is a movie for the deaf community.

I read this Letterboxd review by Carter Martin, a young drummer going through the exact same thing Ruben was. He said this movie made him feel seen. And if I love this movie just because imagine seeing this movie and feeling seen, feeling understood.. maybe even for the first time. So to me Sound of Metal is not just an award movie, it’s an important commentary about the silence where many wonderful people exist in. The silence that  most will never hear  but maybe will at least understand a little after seeing Sound of Metal. And that, in my honest opinion, is better than any award there is.

“You’ve made hearing loss seem less like a burden and more like just another way to live. Knowing about that community of love and hope brings me comfort. I’m Carter Martin, I love movies, and I’m a drummer. My hearing isn’t great, and I know it’s only going to get worse.

But for the first time in my life, I think I’m okay with that.“