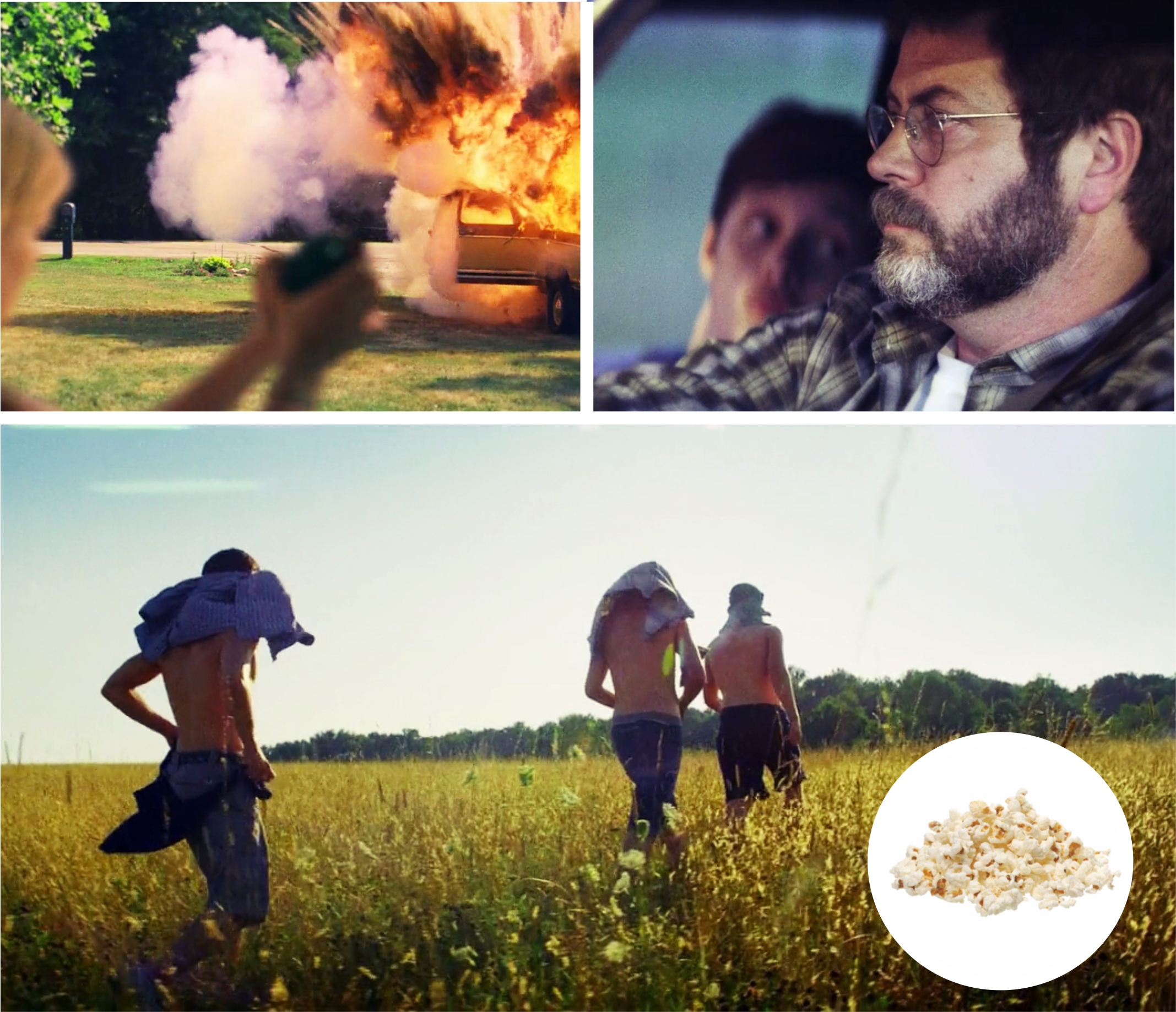 For some reason I’m having trouble finding words to describe The Kings of Summer – this would mark my fourth attempt to start this review and it seems I’m not doing a good job with it. The irony of this situation is the fact that the movie was really good, I pretty much loved it to a point of perfection (I gave it 4,5 stars on Letterboxd) but now, even after two cups of coffee, I’ve lost part of my ability to express my love for this feelgood movie about boys becoming men.

The first thought that came to mind after watching this movie was that The Kings of Summer resembled Wes Anderson’s Moonrise Kingdom: both have heart, lightness and that kind of dry-sarcastic humor that I absolutely love. Yet, while Moonrise Kingdom focused on even younger kids and their forbidden love, The Kings of Summer focuses on teenage boys and their friendship to each other as well as their relationship with their parents. In addition, the latter is also more realistic and portrays the kind of story that you believe to be true, even though there were some plot errors and couple of questionable decisions which I will discuss later on. The fact of the matter is that The Kings of Summer is a story that I can relate to, even though I’m a girl and I never ran away from home, and that is certainly something that makes this movie special.

Part of the charm The Kings of Summer has is because of its great young cast. Nick Robinson and Gabriel Basso are both quite new to the whole movie scene, Robinson especially, but it seems as if they’ve done this for years. Great chemistry and believable emotions between these two actors was what makes The Kings of Summer one of the best movies I’ve seen lately. Obviously it helps to have a really good script to work with, though in many of the scenes Robinson and Basso were showing strong emotions without delivering any lines. If I had to choose, which I don’t necessarily like to do, I’d say Robinson was the strongest out of the two but Basso was almost equally as good. As one might notice, I haven’t mentioned the third actor, Moises Arias, who was apart of their on-screen group and for good reason, he was the weak link. Sure, his character’s lack of appeal was partly the result of the script, but I personally think the performances by Robinson and Basso worked against Arias. Just a little though.

Since I started with actors, I might as well continue with the supporting roles which were brought to us by two great actors (who happened to be married in real life) – Nick Offerman and Megan Mullally. Again, the script itself allowed these to be very funny and sarcastic, but I can’t imagine anybody being as funny as Offerman with those dry-sarcastic-jokes due to his facial expressions. And there’s something about Mullally’s voice that adds to the character, especially when the character is an overprotective mom with a very weird sense of humor. The scene where Offerman, Mullally and Mark Evan Jackson (who portrayed Mullally’s husband) are in the police station is hands down the funniest moment in the movie.

Moving on from the endless praise for the actors, I might as well start praising the cinematography before I get to the plot itself. Now, I already mentioned that these boys run away from home but what I neglected to mention was the fact that they went to live in the woods. Right from the start I knew that the movie was going to be beautiful to look at, and I was right – the scenery and the nature which was captured by the cinematographer Ross Riege, made me miss our summer house in the countryside. The endless fields, the river, the fresh green trees – nobody can deny the fact that The Kings of Summer looks amazing. Most importantly, it has that summer feel to it, especially the late night red flare from the sun setting and the early bright glare from the sun when it’s rising – The Kings of Summer has definitely put the emphasis on the warm tones which create that sunny feeling.

The final segment of this extremely long review is a short plot criticism – yes, I loved The Kings of Summer because it made me feel good and it reminded me my childhood, but I can’t say it was perfect to every extent. There were small questionable things regarding the parents actually searching for their missing kids. The focus was on the boys, indeed, and yet, I didn’t really believe that they could have lived there for that long without anybody finding them. I didn’t let it bother me that much, mostly because I really wanted to like the movie, and also because mid-way through the movie, I forgot about it. Eventually I remembered and now I can’t seem to shake it off but it doesn’t really matter in the end. It’s still a strong story and I like how it all played out. The final scene where the two main characters of Robinson and Basso become friends again (tiny spoiler) is such a strong and honest interpretation of friendship that it makes up for the small little mistakes The Kings of Summer has. And I’m glad it does because I really liked it.