Father of the Bride, Something’s Gotta Give, It’s Complicated and most importantly, The Holiday – these are just some of the movies Nancy Meyers has written that I adore and love. In other words, Meyers has always had a place in my heart. And though she still continues to have her own little modern office somewhere in the depths of my heart, I most likely won’t turn to The Intern on a rainy day like I would for The Holiday.

Ben Whittaker (Robert De Niro) is a 70-year-old widower who has enough energy in him to keep strutting around while attending many funerals and is therefore eager to take part in a senior intern program. He is charismatic, likable and most importantly, not at all a stero typical older person in every other movie or show. It also helps that Robert De Niro is the one to portray him because De Niro is the kind of guy who demands to be liked with his presence – and how can you not to, he is awesome! The company he starts working for is owned by Jules Ostin (Anne Hathaway), who loves riding her bike in the office (yet she rode it ONCE during those two hours) and despite her tough core, still cries when her adviser (?) tells her she should hand over her CEO rights to someone else. 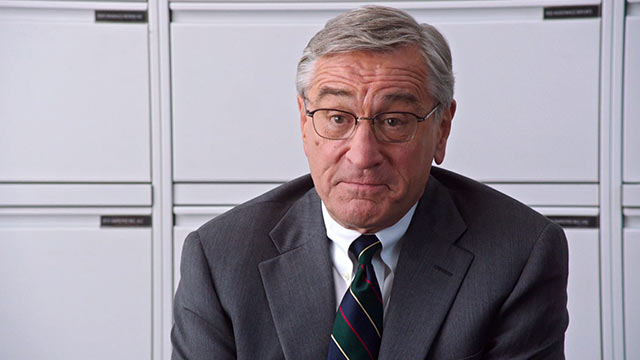 Granted, I might have been a little mean spirited despite the fact that Nancy Meyers still keeps to her style of story telling and I’ve grown up loving that style, but I kept thinking about the flaws in story telling.  There was just something so annoying about The Intern that I couldn’t put my finger on it, and the more I think about it, the more I realize that The Intern felt too fabricated for my taste. Now, I still love Meyers, I adore De Niro and I tolerate Hathaway, but the plot itself was just too much to handle. Here we had a very capable 70-year-old, always nicely dressed and very observant, a perfect example of a senior intern – and Jules Ostin doesn’t like him at first? Here we also have a young woman, running her own fashion company, and controlling every little aspect of it, while having a family and for some reason running out to meetings all over town. Things just didn’t add up, and nothing felt real because if you run a very successful company, surely people would sometimes come to you!? And how is it, that every employee seemed to have problems, either with getting dates or being emotionally overwhelmed, or drinking while on the job? Maybe I’m just too stupid to understand how Internet companies work but I seriously don’t understand why I didn’t witness any meetings in Jules’ own office and she kept driving to them.

And while there seems to be enough reasons to dislike The Intern, I still want to mention the whole family issue that surfaced in the second half of the movie. Yes, working mothers do spend a lot of time in the office, and yes, working mothers might not have a lot of time to spend with their children, but why is it that working mothers are constantly being thrown under the bus in movies/shows? I get that maybe in the late 80’s and early 90’s, a working mother might not have been common, but surely in the 21st century we are used to the idea? There was so much hate towards Jules by other mothers, and then the plot went to high lengths trying to show that a working wife is something a man is eager to cheat on? I just didn’t appreciate that because the progression of their marriage would have worked without the cheating arc and throwing that in, made Jules feel weak and I just can’t justify forgiving such a thing in a million years. Sorry, but I just, there’s no appreciation towards Meyers in that regards – writing a capable stay at home dad (Anders Holm), and then throwing him under the bus by making him into a cheater. And not just a one time cheater, no, a full time affair type of cheater and that’s when I lost all respect.

Though as you can tell, I was angry at The Intern for many reasons, I still enjoyed parts of it, and that is what Nancy Meyers is all about – enjoying little things in life. May it be a massage during the office hours by a lovely lady (Rene Russo), or may it be deleting an e-mail on your mother’s computer – small little comedic moments like that is what make Nancy Meyers stand out. Though I had some unresolved issues with the movie, I still was able to enjoy the fun of it and there’s nothing more enjoyable than watching Robert De Niro practicing blinking in front of the mirror. And while there was a lot of screen time for the main characters, there was still room for Adam DeVine to be funny, which is always something I love. By the way, Paige (JoJo Kushner), Jules’ daughter, was the most adorable thing ever! And for those small moments, mostly given to me by the supporting actors, and Robert De Niro, I would say I left the cinema in a good mood.

Though yes, the ending was extremely underwhelming, and again, way too fabricated for my liking, the overall mushiness of The Intern did manage to lift my spirits at times. I’m just a little annoyed with Meyers for taking it too far when she didn’t need to, and writing situations to spice up the story line, that weren’t my cup of tea.