In case you are stumbling on this blog just now, know that I’m a big fan of The Hunger Games franchise. I loved the first movie when it came out, I loved the second one even more and no amount of drama with Lawrence could have kept me away from the third installment. Therefore, you can imagine the little old me anticipating this one with quiet anticipation until I had to endure two hours of almost nothing because why make one when you can make two!

The whole situation in the movie industry is getting a little bit annoying with this whole partial storytelling situation – franchise after franchise is using the splitting the last book into two strategy. True, some deserve it (Harry Potter) because there is a lot to tell, and then there are others that really don’t need it (Hobbit, The Hunger Games). What made me love Catching Fire was the fact that it was fast, it kept building up and it never seemed to slow down because there was no time. With Mockingjay, they slowed down so much that I was literally bored staring at emotionally crippled Katniss after every 10 minutes. We get it, it’s an emotional situation but there is no need to drag it on to a point of exhaustion.

Looking past the fact that Mockingjay could have worked extremely well as a single movie, I’m giving my best to see the good in the Part 1 and Part 2 situation. Clarity. Now, I have read the books so maybe I’m not the best person to analyse this but it feels to me that with the Part 1, the viewers who were maybe a little bit confused about it all, got a bit more context to The Hunger Games world.. not a lot but maybe just enough. Or maybe they were too bored the whole way through to even notice the scene where Finnick delivered the whole back story to President Snow because it was so irrelevant! Alright, I might be slightly overreacting but there is a reason why I like the first two movies of the franchise, their simplicity in delivering a fast based action sequences, followed by another and then another one, until it all builds up towards that grand finale.

The most annoying part about Mockingjay Part 1 was the fact that something far more interesting kept happening outside District 13 but we weren’t allowed to fully enjoy it. One of the best scenes in the whole movie was the mission to save Peeta from the Capitol – a mission where Gale was magically included since he has so much training as a soldier. It was so well made, it looked authentic and yet, it was interrupted with the nonsense that was Finnick giving a monologue. I couldn’t care less about the whole Snow speech because it didn’t really serve for anything, Snow’s a bad guy, we get it, now show us the super slick mission and Peeta! That was probably another disappointment for me, not enough Peeta to balance out Katniss, as he had been doing since the first Hunger Games movie.

They did split the movie in a great way though, because Peeta’s condition was the most exciting thing in Mockingjay and works well as a cliffhanger. And while I’m on the good things, because there were other good moments among the dullness as well, though it might not seem like it through all my ranting, but there were. The fact that they wrote Effie into the movie was a good decision, and like I predicted, Elizabeth Banks stole every scene she was in, and visually Mockingjay looked great! There’s no denying of the fact that this movie looks authentic and believable. So when I’m already giving out compliments, let me just mention that The Hanging Tree song is a stroke of genius! Honestly, it still haunts me and if that would have been the only time out scene in the movie, it would have had so much more power to it without getting lost in the middle of all that mush.

Therefore, to conclude this pessimistic review, I would definitely recommend to wait for Part 2 because without it, Part 1 doesn’t really have a lot to grab onto – and I know, I’ve read the book which also happened to be my least favorite from the trilogy. There just isn’t enough tension, like there was in Catching Fire which will most likely remain the best movie of the franchise and I’m quite disappointed with Mockingjay to be honest. Quite disappointed and sad that it didn’t blow me away. 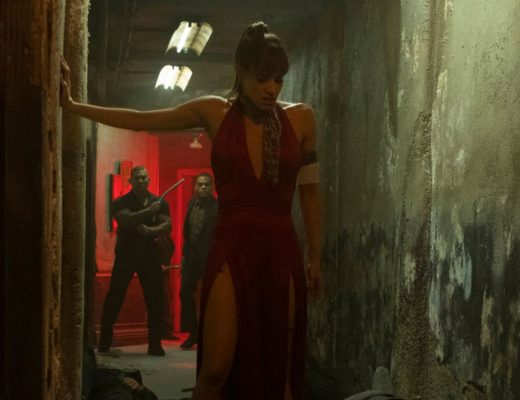