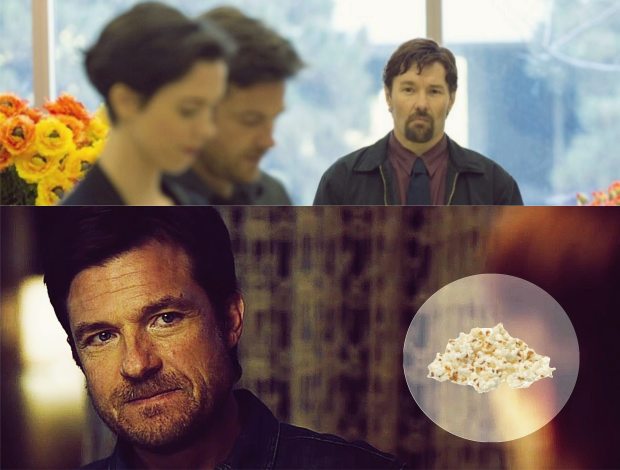 I have dedicated some paragraphs to spoilers.

Some weeks ago, on a Thursday evening, the latest I’ve gone to the cinema in a while, I intended to enjoy a movie that was going to be thrilling and exciting. Now, it was something, but it wasn’t as thrilling as I hoped it would be. Nevertheless, The Gift was actually a rather interesting psychological movie focusing on a popular topic from a fresh angle. Plus, thanks to this movie, gift giving now has a completely new meaning to me.

The whole movie is Joel Edgerton’s playground, he wrote, directed and took on the supportive role in The Gift and I must admit, I didn’t expect him to be so skillful at it. It’s not that he is the most popular actor out there but I’ve seen him around, I’m used to referring to him as an actor but I guess I now get to reevaluate his title because he has potential. Not just as a writer, but more importantly, as a director because The Gift, undoubtedly, was all about the presentation of the story and the elegance surrounding the ugly truth.

The whole concept of the movie is actually my favorite part, the subtext and the subtle stab at one very important issue. I like how the movie doesn’t really tell you the truth right away, it cheats and manipulates the viewer as much as the characters, and the result is exciting. I’m going to spoil something now, I was surprised that The Gift was actually about two villains. That’s right, not just one bad to be scared of, but two – one of whom was worse than the other because he possessed psychopathic tendencies. In other words, Jason Bateman’s character was a bully, and though he comes off a little less scary in the beginning, he has a turning point and in that moment you realize, he is a true villain.

So by the end of the movie you only get to root for the female lead played by Rebecca Hall because out of everyone, she stays the most innocent throughout. She is the accepting one, she is kind and understanding, yet she is blind to her own husband’s cruelty that is aimed towards Gordo (Edgerton). There is a moment in the movie where she finally understands her husbands’ wrong doings, and it feels right for her to act on that the way she did. And though the movie progresses gradually towards the end game that is way too out there to accept, The Gift does leave you wondering, by the end, who is to blame here really than the good guy who turned somebody onto the road of revenge. And then you realize, the movie is simply a take on bullying that has transcended into adult hood because bullies never really change, they just find new, more grown up ways to ruin people’s lives.

As said, the concept of the movie is really good, but the movie could have been a little more thrilling. There were really just two jump moments for me, and I get scared very easily, so I was expecting a little bit more. I do appreciate the shower scene though, that was some great directing and I definitely wasn’t the only one who jumped out of their seat during that moment. That being said, despite the lack of thrill, the movie was actually all around well directed and I liked the simplicity of it all. I kept thinking, this is so simple and yet, the story was interesting enough to keep me entertained.. maybe tad bit too long but still pretty good. So there’s a big part of me that is looking forward to see more Edgerton’s movies, directed and even written because I believe he has potential. Just like Bateman has potential to branch from comedy towards something more serious as it was evident in The Gift.