The last time we saw Paul Spector (Jamie Dornan), he was lying in Stella’s (Gillian Anderson) arms, bleeding from gunshot wounds and looking at Stella meaningfully, almost satisfyingly. It felt like the end, the actual fall of the serial killer with two kids, a wife and a psychotic need to strangle women. Two strong characters at their weakest moment, looking at each other, recognizing themselves in each other, wishing to continue the hunt.

I’ve expressed my love for The Fall twice on this blog, by reviewing the pilot, and in my in depth review of The Fall of Paul Spector. Both of those pieces are one of my favorites on my blog, and I would like to think that is because The Fall offers me something no other show does. It is a slow developing crime drama, revealing both sides of the law, and blurring the line between good and evil by showing similarities between them. The show had two very strong seasons, and the first episode of season 3, is a fine example of how that strength is still present.

Silence & Suffering starts with a little summary of what has happened, refreshing our memory, and replaying that final moment in season 2. Then we are seeing Paul driving in a car, in an almost dark tunnel, a metaphor of going towards the light. We are later shown the same tunnel again, where Paul is choosing between his mother and his kids. It’s interesting to see a show so serious, and true to life, use such a visual metaphor, and yet, it feels authentic because the scene doesn’t really have that big shining light, just the voices, and just the tormented choice between life and death.

The episode focuses a lot on saving the life of Paul Spector. He is critically injured, and since it took a while for the ambulance to arrive, he has also lost a lot of blood. The scenes in the hospital are gruesome and feel real, and that was the best part. The slow and thorough process of getting him prepped for surgery, the decisions being made in a calculated matter, and the focus on detail, were just a few things that made the season 3 premier a worthy experience. No yelling, no running, no jumpy scenes, no rush – now that was some great TV!

Now, during the process of saving Paul’s life, the question of morals comes to play, and whether the act of saving a serial killer is somehow worse than letting him die. This is a valid point, and I like the way the show puts it in front of us, and how it solves it. No life, even the one of a serial killer, is not worth saving. And doctors aren’t the one who should pass on judgment to those who are under their knife. A life, no matter the choices that compile said life, is always worth saving.

During this, the media is slowly catching on to the events, and Katie finds out about Paul as well. Katie, who is the obsessed teenager, is furious at not being able to see him. And when stopped by her mother, she calls her friends, who clearly have no idea how dangerous her obsession is. Being shut out by her peers, Katie feels alone and who knows what she might do to help the man she loves.

Two small moments of the season premier stood out for me, and the first has brought up many questions. When ACC Jim Burns (John Lynch) calls Stella after the incident, after they have made it to the hospital, his first question is: “How is he?”. Despite the history these two share, Burns does not ask about Stella, and none of his questions are about her. The first question is about him, Paul Spector, the serial killer who got shot under their noses. And later we learn that Stella herself wants him in that court room, in that prison, and not dead, because death, in their eyes, is the easier way out. Pretty much everyone involved wants Spector to stay alive, and Stella especially is concerned of his well being. 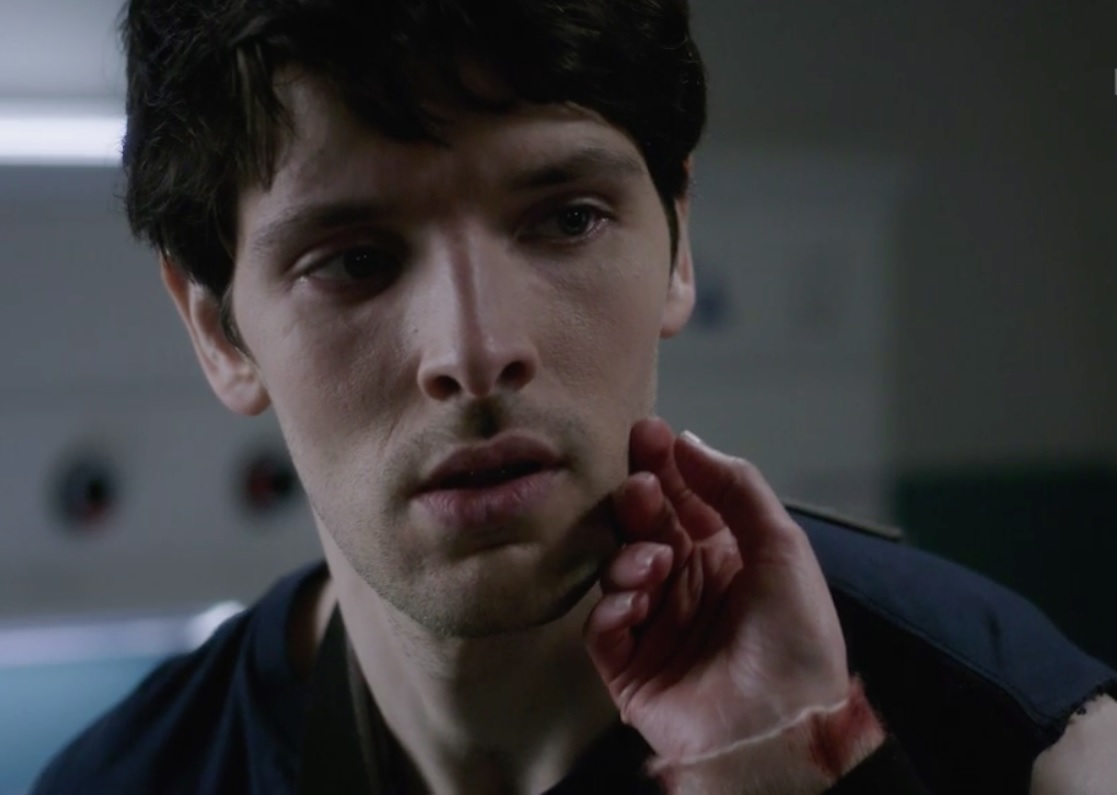 Another moment happens between Stella and DS Anderson (Colin Morgan), who also got shot at the scene, and witnessed the moment where Stella ran towards Spector. He confronts her, since he has feelings for her, out of jealousy and curiosity, why she ran towards Paul and not him. She tells him that she saw Paul to be more injured than him, and made the choice due to that, and when it seems Anderson does not believe him, she touches his face affectionately. When they are interrupted, Stella hastily removes her hand, as if this was wrong. Yet, when she ran and held Paul Spector, the showcase of affection was plain to see for everyone around them.

Both of these situations highlight Stella Gibson’s character. She is strong, and doesn’t let her weakness show. Yet, and I think this is what the show wants us to slowly realize, she feels weakness towards Paul Spector. Whether it is fear, though I doubt that being the whole truth, or maybe curiosity, that is pulling these two towards each other. In a way though, I think it’s also attraction, may it be physical or mental, but these two feel a connection that in its core is so wrong, that they are both sort of fighting it. Stella because Paul is a killer, Paul because Stella reminds him of his mother. Either way, the relationship between these two characters is so interesting, that every look and every word can be analyzed endlessly. Stella’s weakness is also presented in the end when she sits beside an old woman in her hospital bed. It is not clear who this woman is, but she seems to recognize Stella – maybe delusional, maybe not. But Stella seems emotionally exhausted at the end of the episode, as if this case is pulling her closer and closer to unraveling.

With five episode ahead of me, and with that eerie ending to Silence & Suffering, Paul opening his eyes for a second, and the doctor in her room feeling the danger, I’m excited. I’m expecting a slow recovery for Paul, while he pretends to be weaker than he is, not letting anyone know he is awake. And with such a tense opening to this new season, I’m eager to indulge myself with the second episode, His Troubled Thoughts, and then wait impatiently for the third episode to come out.

Are you watching The Fall?