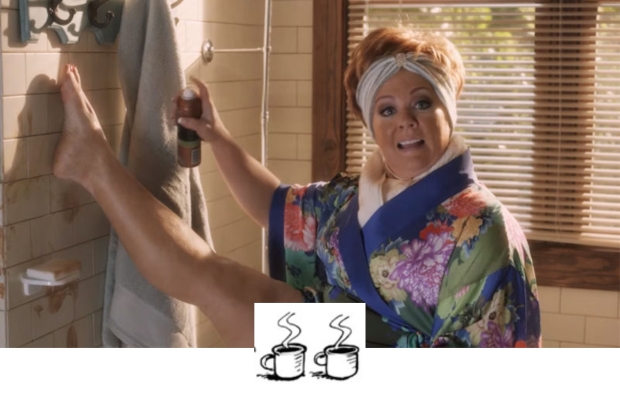 I like Melissa McCarthy. I think she is funny, she is a great actress, and she deserves all the attention she is getting! But, and this is not the first nor the last time I’ll be saying this, I don’t like her movies. Sure, some of her movies have been amazing, for instance Spy, but the majority of comedies that she has starred in the past few years (some of them I haven’t even watched) have been disappointing – and that list now includes The Boss.

The plot for this irritating comedy brings us Michelle (Melissa McCarthy), an orphan, who has worked her way towards wealth and fame. On her way to the top, she pissed of Ronald (Peter Dinklage), who seeks revenge by bankrupting her and sending her to jail for 5 months. When she gets out, her former assistant Claire (Kristen Bell), is the only person, who out of the kindness of her heart decides to take her in. After months of wallowing, Michelle discovers her new calling thanks to Claire’s daughter Rachel (Ella Anderson), and decides to start her own cookie selling company Darnell’s Darlings.

While the plot could promise a movie with self growth, and character development for our main protagonist, everything great seems to be clouded by what The Boss could have been. And though I have nothing against Ben Falcone, I think this movie was a failure on many levels. Similar to Tammy, though at least now McCarthy plays a far more put-together woman, The Boss isn’t funny nor entertaining. The jokes fall short, some feel far fetched and the only good thing is the rare moment when Falcone steps in front of the camera himself, which is where magic happens between him and McCarthy.

What disappointed me the most was the violent way Michelle Darnell worked her way towards the top again. Alright, you have an aggressive approach with your Darlings, and your work ethic might not be friendly, but the violence that took place between the girls from opposite cookie selling franchises was just irritatingly stupid. We have enough movies with women put against women, to see girls do the same while being inspired by the women fighting in this movie, was just awful. Sure, it might be funny to see a grown woman insult a girl, but I mean, is it necessary to show that imagery towards girls who might look up to Melissa? I don’t think so. And while everything else might have not been as bad, the sheer fact that this women against women plot was even featured in the movie, is a disappointment and a disgrace.

Alright, yes, I might be angry at something that wasn’t even that big of a deal in the movie, but I wasn’t convinced otherwise by anything else either. While Michelle as a character grew and become more friendly towards Claire and Rachel, she still sold herself short by hooking up with Ronald in the end. And let’s not discuss how disappointing it is to see Peter Dinklage in a role like that, considering he is far more talented as an actor.

Which brings me to my last and final disappointment, which was another surprise – Kristen Bell. While I still am a fan Veronica Mars, Bell’s performance here wasn’t something I’d like to praise. For some reason I found her a little cold and not too comfortable in front of the camera, which is something I saw in the Veronica Mars movie as well. She didn’t even seem to have great chemistry with Melissa, who is known for having great chemistry with women such as Lauren Graham, Sandra Bullock and Rose Byrne. Heck, McCarthy even had better chemistry with Claire’s daughter than Claire herself.

So, even though I didn’t really expect anything from The Boss, the movie surprised me by being even worse than I thought. Maybe I’m being too harsh, maybe I’m expecting more and maybe I just want something far more clever from comedies than they are willing to deliver, but the truth of the fact it, I didn’t enjoy The Boss at all. I thought it was weak, I didn’t find it funny, and even when I laughed, I wasn’t laughing from the heart. And it was stupid with its women against women plot, and to have the main character fall back into the arms of the villain in the end, makes this movie the most anti-woman thing I’ve seen in a while. Shame on you, Falcone and McCarthy – you both should know better!