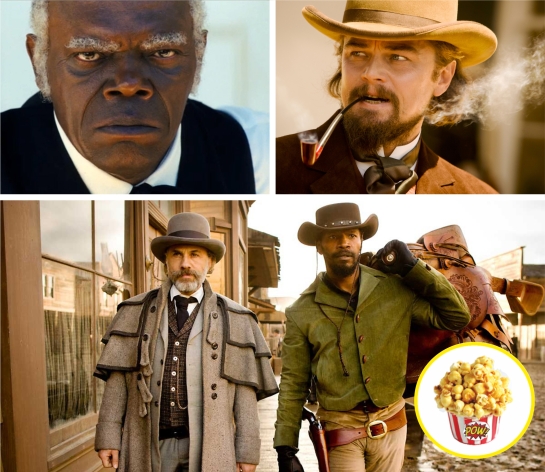 As much as I would want to, I can’t recall the first time I ever saw Pulp Fiction but I’m pretty sure I had no idea what it was about anyway. I was quite young, that I’m sure of, and while the first experience surpassed me with all its nuances, the following experiences with Tarantino’s movies made this writer+director one of my current favorites. But before I can say I have seen all Tarantino’s works (writer+director), I must pen down a rather long and full of praise review of Django Unchained.

END_OF_DOCUMENT_TOKEN_TO_BE_REPLACED

Due to my Summer brake which means I have a lot of free time on my hands, I managed to go to the cinema twice (in June) – Horrible Bosses was my second choice and I was utterly thrilled about it. It seems that this is my 2011 favorite comedy so far and I think that it has a lot to do with the fact that the cast looks like the crown jewel of Hollywood. Starting with Jason Bateman, Jason Sudeikis, Charlie Day and adding to them their bosses Kevin Spacey, Colin Farrell and Jennifer Aniston you would think that nothing can go wrong and that would be the correct way of thinking.

Horrible Bosses tells a simple story about three friends who have horrible bosses and who they decide to kill. Simple as that and with a lot of humor and what can only be described as slightly crazy looking Rachel (Aniston’s most beloved character) with Charlie Day was pretty awesome. It was very interesting for me to watch Jennifer Aniston doing that type of a character because I’m used to her as a soft humor girl but Horrible Bosses showed that she can be a bit crazy-scary-funny as well. Nothing bad about it, it wasn’t too over the top for the plot but I doubt that that kind of a boss can really be real. Talking about real looking bosses, Kevin Spacey did magic with his character,  the exact kind of horrible I was imagining before I watched this movie – making his employs do things by cornering them. I wouldn’t want to work with Kevin Spacey as my horrible boss but I would like to work with him as an actor – I think he’s brilliant. Colin Farrell had a lot of make-up and looked awful in a sense that he is a handsome man but in this he was far from it but he still gave a great performance.

Now when talking about the three friends who’s horrible bosses I already covered it’s really hard for me to grasp my thoughts into a solid sentences. First of all, I love all those guys, I liked them before but now it seems I have built up a fake love affair with all three (or if I had to choose one I would go with Bateman). They are all different, although both the Jasons look really similar: Bateman is this clean cut, sophisticated, hot from top to bottom and very sarcastic, Sudeikis is more loose, a bit rough around the edges and definitely more goofy while Charlie is cute as a button and more physical with his humor (his emotions at some moments were priceless). So putting them three together as a trio who were about to empark on a journey that was far from legal was a great casting call and with a solid script it’s no surprise they all signed in. This is exactly what I’m talking about, a solid script with a story that takes you from the beginning to end with lots of laughs and a great cast!

All in all, I liked this movie a lot and I’m totally okay with giving it a 4,5 out of 5. Why not 5, I think that considering its humor and vulgar approach to bosses, it might not be suitable for everybody and a movie that gets 5 should be good for everybody. I might even know why it has a 7,7 score in IMDb – comedies rarely get better grades cause humor is subjective and it’s very hard to get it 100% right with everybody. Horrible Bosses managed to get it right with me and I think that the fact that for me there haven’t been good comedies lately helped this movie out a bit – I just really needed a good laugh!

In this rate this summer is going to be very funny because another good comedy has released its trailer: Horrible Bosses. One thing that makes this probably my most favorite out of all the comedies this summer is the list of actors in it. Starting with Jason Bateman, Kevin Spacey, Jason Sudeikis, Charlie Day, Colin Farrell, Jamie Foxx and Jennifer Aniston! This has all the comedy stars in one movie and it seems that it’s all what a great comedy needs. Add the fact that this movie is about bosses who are described as horrible you might even have something in common with it.

As an interesting fact, this movie was co-written by one of the cast members of Bones. Want to guess who? No. Okay. It is John Francis Daley who plays Sweets. Another fact, this movie opens on July 8th.