The word sicario means hitman in Spanish, and once you know this, you will gain the basic idea what Sicario is about. Maybe an exaggerated version of the reality, maybe a version of the reality we have not used to seeing but is existing out there – either way, Sicario will scare you and it will make you wonder how many bad men have done bad things and gotten away with it because the bad things are done to equally bad men.

Kate Macer (Emily Blunt) happens to stumble upon a house of corpses, literally, and is therefore given the opportunity to be apart of a task force against drug trafficking on the border of Mexico and US. Macer could best be described as meticulous and by the book kind of woman, who loves her work and therefore, has no room for any other type of love in her life. Divorced, barely eating and definitely lonely in her social life, Macer is married to her job, and her partner Reggie Wayne (Daniel Kaluuya) seems to be her only friend. So it is understandable for her to start asking questions about the job when the men behind the mission, Matt Graver (Josh Brolin) and Alejandro (Benicio Del Toro), keep the details of the mission and the information to the minimum.

The thrill of Sicario is a combination of not really knowing what is going on and what Macer’s role in the mission is, as well as the direction Denis Villeneuve takes. We as a viewer are in the dark, and we know as much as Macer, until the very end, when the movie splits away from Macer and follows Alejandro instead. Elevated through Roger Deakins’ cinematography, which reveals not only the ugliness, but allows long and stunning views of the vast and empty scenery of Mexico. Sicario feels like a carefully put together package which might explode any minute – in a good way. Therefore, together with mundane moments, simple details of ordinary life, combined with brutal interrogations and calculated killings, Sicario feels raw, real and most importantly, scary enough to give you goosebumps.

One of my favorite moments in the movie is the interrogation where Alejandro simply stands in front of the man, his private parts pressed against him, the camera angle low, showing dominance and power. Nothing is said, just a mere act of inflicting power over the tied up man sitting in the chair, Alejandro’s presence, in that very moment, is revealed to be strong and menacing. Yet, it’s not the moment where you start to fear him, not even close, because his alliance then and there is still unknown, and only when he pulls a gun on Macer, we start to fear him for who he truly is. 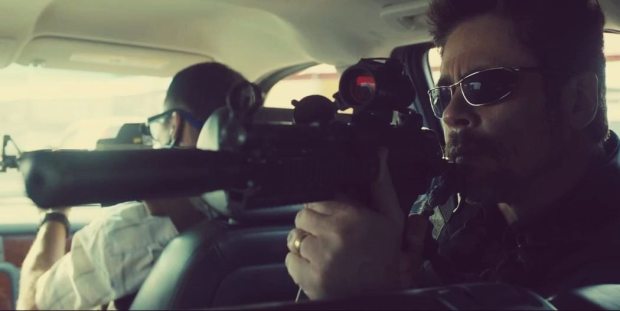 There’s a sophistication in Sicario that made me happy to have watched the movie, the blurred line between good and evil, so vague that you almost start to wonder who exactly is the villain of the story. Del Toro’s performance elevates the meaning of that line because despite his acts of violence, and his dominance over others, you sort of feel sorry for him. And though Emily Blunt’s character is the spotlight for the most part, her portrayal as Macer feels as if its diminishing scene after scene, as her power is stripped away from her by these strong male characters. Smoke after smoke she becomes less and less herself, and as she hunts for the truth, she realizes that even knowing it, she can’t change the outcome. Weather intentional or not, that kind of performance by Blunt really gives you an idea how women might feel in the midst of men who play with lives.

Undoubtedly a good movie, Sicario is still not the best thing there has been and it’s not because of the plot nor the actors, it’s because some scenes felt unnecessary for me personally. Not only was the backstory of the cop a little too dragged out, the last act of the movie also felt like an afterthought. Part of me almost wanted Sicario to end at the dinner table though I guess the final scene gave some more thought in regards to acts of violence done in secrecy, the ending still was not ideal for my taste. This being said, I do think Sicario serves as a much better war movie with a female lead than Zero Dark Thirty, a movie it will be compared to uncountable times, and that’s a win in my book. Plus, the night vision cave scene – bravo! Really, that was like the best sequence in the whole movie because I had never seen something like that and I was glued to the screen like a moth to a flame because I didn’t want to miss anything! And though I did, and I’m sorry to say this, felt a need for more, for me Sicario’s strength lies in the tunnels and beyond that, which was actually stronger than the whole Zero Dark Thirty experience.