We all do it, we all go to book stores and buy a book we’d love to read right away and then months later, there are suddenly dozen books on your night stand waiting for your attention. With work, movies, TV show marathons and everything Internet related, I tend to forget that I actually love reading! So I decided to start this week off with a little dedication post to some of the books I have in my possession that I haven’t had the time to read/finish… yet.

Just to clarify before I continue – these books are in no particular order! They are discussed shortly without any spoilers because I haven’t read them – with the exception of one which I haven’t finished yet! There are a variety of themes running through which is how I like to read – from genre to genre, really not sticking to one or preferring it to others. And even though I do like YA novels a lot, it just happens that there are none in this list and it might be because I haven’t really gravitated towards them in these past few months.

642 Things To Write About

By The San Francisco Writers’ Grotto

This is technically my first workbook I’ve bought to enhance my skill of writing past the basic doodles on the paper here and there. 642 Things To Write About is a cool book for every writing enthusiast who might need to improve skills or simply get out of the writer’s block stage. It has everyday situations, it has weird tasks and then there’s the short story titled Screw You! which I’m saving for that mad angry mood! I like this, I like that I decide what to write but I have a tiny bit of direction provided, and ever since I’ve had it on my desk, I’ve been writing a little bit more – what can be better than that? 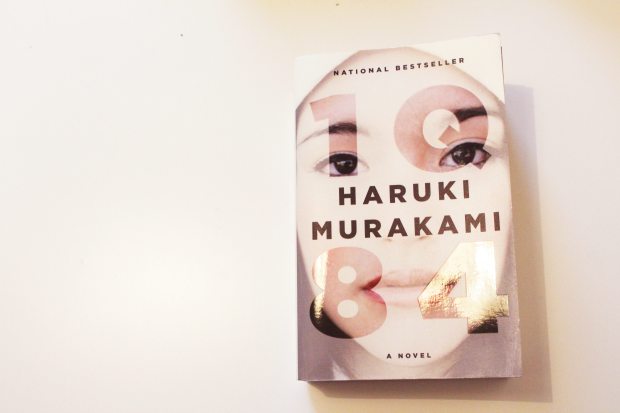 Ever since finishing Kafka On the Shore, I’ve wanted to tackle Haruki Murakami’s biggest story – in terms of context as well as the size of the book! This is heavy, this is heavy duty book holding that I will, hopefully soon, have to endure while reading. Too bad I’m two hands up for paper books and not a fan of e-readers, because I’m already threading the book falling on my face or something but size matters and I’ve always liked big books.

But that’s not why I gravitated towards the book, it was the word dystopia which grabbed me and especially in relation to this particular author, that made it almost irresistible. That, and the fact that I’ve only heard good things about it which isn’t necessarily a good thing every time but I’m pretty certain that for 1Q84 it is.

In my Horns review I discussed the fact that I’ve never read a Joe Hill novel but I have one I plan to read – this is it! I remember the day I purchased this, it was days before Christmas and I was not feeling the holiday mood – enter NOS4R2. I was pulled in by the cover, I’m a sucker for pretty book covers!, and the sticker that says A Christmas Horror Story among the red skulls: perfection. The story is about a man who kidnaps kids and just happens to take the child of the only person who’s escaped him. It is a crime story, with a hint of Holiday spirit thrown into it – I don’t know what better way to spend Christmas, I honestly don’t. 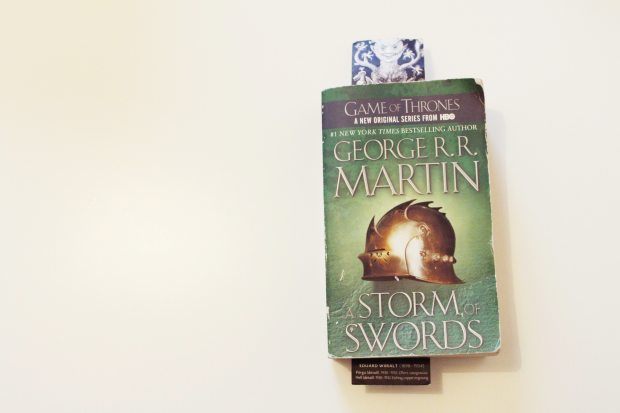 This is an embarrassment in its biggest form – the Game of Thrones series and my unfinished status with it where I’m stuck with Storm of Swords. I’m almost half way through though, I’ve almost at the Red Wedding which is somewhere I really don’t want to be but if I get past it, there’s some great stuff coming .. and hopefully Gendry comes back, right!?

Should I even talk about this book? I mean, everybody knows what it’s about, hell, even I know what happens because the series is yet again ahead of my reading and though I try to surpass the show, I seem to get stuck a lot. At least I have the entire series which means I would have the possibility to catch up and read ahead but at this point, I’ve lost hope. Though, I know I’ll finish this series, I really do because there’s nothing bad about it… I’m just a lousy reader. 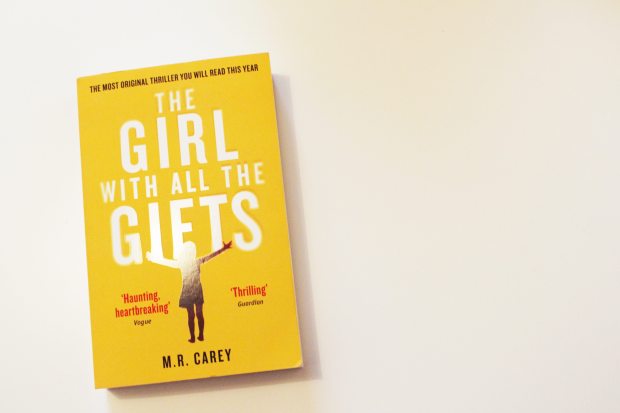 The Girl With All The Gifts

The bright yellow cover was not the only thing that caught my eye with this one – it was also the title and the short summary behind the book. I’ve read some chapters and I have to tell you, I don’t get it yet. The book is playing around with not telling us the whole story right away, hiding the fact what the girl actually is and I say what because I’m pretty sure she’s a version of a zombie or something. But I’m not sure.

A tiny part of me is annoyed by this vague story telling and that is probably why I have stopped reading it at this point but I always say, every book is an experience and has a value of some sorts. Even if I end up disliking it, it teaches me something about what kind of books I like and what kind of story telling I would avoid in that distant future where I might actually start writing myself. That and I really do want to know what is up with that girl.

My latest addition to my collection is another big read – I really like those big and heavy books! Neil Gaiman’s American Gods is a fantasy story from a man with a big imagination, and it’s about Gods, I presume. The thing is, I’m not very familiar with Gaiman’s work and I only know of him by hearsay which has been good as far as I can tell. Also, I heard that this book was good so when I went to buy Wool and couldn’t find it, I figured I’d buy this instead – because one should never exit a book store empty handed.

Another contributing fact to buying this was the fact that it is a supernatural story and I love those! I like to read about things that aren’t real because it somehow expands my mind further than everyday life and it’s great to escape to a whole new world. That, and the fact that I think fantasy/supernatural plots are a little bit more interesting because they have a lot more room to play around with.

Is Everyone Hanging Out Without Me? (And Other Concerns)

First and most likely not the last autobiography book on my night stand is by my favorite funny woman, Mindy Kaling. I just love Mindy, I love everything about her and this is why I purchased the last book from the store even though one of its edge was a bit bent. I didn’t care!

Since starting the book, I’ve realized that Mindy is a smart woman – she knows when to use humor and at other moments, she is being serious with topics like popularity and weight. I’m not even half way through and I’m already finding some inspiration from her and her childhood stories make me love her even more. And I’m sure when I finish this, I’ll be itching for Tina Fey’s book as well because who knew autobiographies could be so fun!?

I know I shouldn’t be asking, because I might want to read them all, but what are the books on your night stand?

0
Tags: 1Q84, 642 Things To Write About, American Gods, George R. R. Martin, Haruki Murakami, Is Everyone Hanging Out Without Me, Joe Hill, M.R. Carey, Mindy Kaling, NOS4R2, Storm of Swords, The Girl With All The Gifts