With the arrival of fall, where the leaves are changing color and the only place comfortable enough seems to be inside a snug blanket with a cup of coffee, there is a desire to be treated by a great visual experience. I’m talking about finding that specific movie or a show that captures you, takes you on an interesting journey and leaves you wondering about life, relationships and love. On a particular fall evening, cold and rainy, I was lucky enough to experience something that special, within an hour I was hooked and confident enough to state that my newcomer fall favorite this year is The Affair.

While everybody out there is raving about Rosamund Pike, understandably, I’ve suddenly fallen head over heels for Ruth Wilson – another British gem who managed to convince me of loss by wrapping her finger with a bandage. That simple scene in the beginning of her chapter showed the kind of talent behind a woman that should be praised everywhere, because the melancholy in Wilson’s eyes without a word spoken broke my heart. But that is just one element of The Affair that I loved, truth to be told, there are many more including tiny hints of perfection that make me shiver with anticipation for the whole series during this cold cold fall. 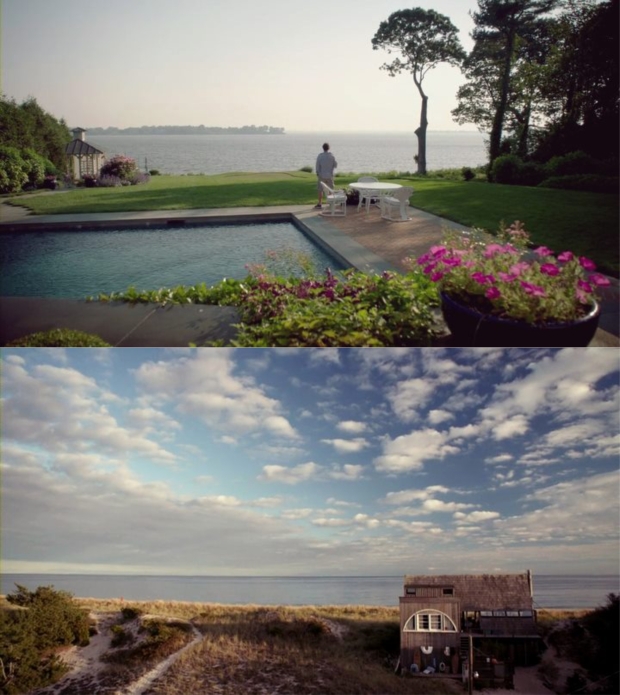 Granted, I’m a week behind with raving about The Affair because by the time this posts goes up, I’ve most likely seen the second episode as well. But, watching the pilot is still a fresh experience because I remember so much, while so little was actually being shown. The basic construction of The Affair is simple: 2 chapters, 2 different POV characters, 2 different sides to the very same story and oh how wonderful it all looked by the time the first episode ended.

It starts with Noah (Dominic West). He is a husband to what seems to be a very understanding wife Helen (Maura Tierney) and a father to four children, out of whom two will most likely cause a lot of trouble. The first actual encounter with Noah and his oldest son pretty much shocked the hell out of me! It was so borderline crazy and scary and it definitely woke up my every nerve in that point. For some reason, I want to say that the shock scene had a lot of raw power behind it but it’s probably because I’ve never really seen something that horrific. All the factors for that powerful statement made it more scary and it really raises a lot of questions, especially after we witness the difference between Noah and Alison (Ruth Wilson).

By the middle of the episode, Noah and Alison have met through the eyes of Noah but then, we are taken back to the beginning of the same day but following the perspective of Alison instead. Like I said, the beginning of her chapter is heart breaking and the silent melancholy of Wilson’s character just hits you were it hurts. Here’s the only spoiler I’m going to give away in this post – Alison has lost a child. Clearly, I know nothing about a loss of a child and I could never imagine the pain but watching Alison reading Peter Pan while sitting on her son’s grave made me cry like crazy. It was so real and I just, I have no words, I mean.. no words.

In addition to the interesting back-stories of the main characters, the difference of their chapters raises a lot of questions as well. Which perspective is more true to the actual events, is it the man’s, who sees a manipulative woman, or is it the woman’s, who is almost aggressively pursued by the man. Or, are they both altering their memory of the actual events to tell a more favorable story while they both have the capacity to make bad decisions. The reason we are asked to raise these questions is because The Affair follows a familiar structure of story telling, more precisely, it is similar to True Detective, where the majority of the plot is told in the past, while the main characters are interrogated in the present.

Now, as the British invasion to American TV is growing strong with Dominic West and Ruth Wilson giving both great performances, let’s not forget the underdogs of The Affair who are just as good. I already mentioned Maura Tierney as Noah’s wife and while she didn’t get to shine in the pilot as much as I would have loved to see, Joshua Jackson as Cole was on a whole new level! I’ve been a fan of Jackson since his teen days in Dawson’s Creek, that fangirling continued with Fringe and now I get to see him in a more polished and realistic show as well. He plays Alison’s husband and well, there’s nudity.. like, butt naked nudity which is something I don’t mind what so ever.

Lastly, though I’ve probably not described the pilot well because I’m trying hard not to spoil the experience of watching the pilot (it’s really good in my opinion, really good), but I want to brush upon the cinematography as well. The Affair runs on Showtime, since networks actually say a lot about a series, and I must say, it does have that HBO quality to it (True Detective, How To Make It In America etc.). I don’t know if I’m making any sense but I think HBO has the tendency to add more substance to a series through imagery and there’s this small scene in Alison’s chapter where the camera focuses on the details of a window. Cobweb, fringe, curtain moving in the wind – and it is all out of focus. And for some odd reason, that was the moment I knew that I’m going to adore The Affair.. Never mind the fact that this small scene was followed by butt naked Jakcson, never mind that at all.

With an interesting plot, with the mystery of not knowing what happened and why Noah and Alison are being questioned in a police station, with great performances and the added bonus of having a nice, clean, sharp and meaningful cinematography, The Affair will win you over! There’s so much to praise about, so little words to do so and I think that even after just one episode, I’m hooked. Plus, I sort of admire the show for having the structural similarity to True Detective because that’s smart TV making in a way.. it’s so different and yet, it is comforting within its familiarity.