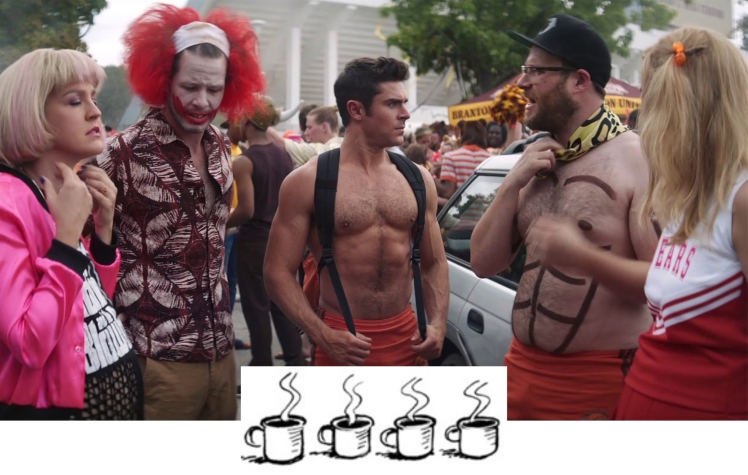 I went into Neighbors 2: Sorority Rising with medium expectations, I knew that it was going to be funny but I was surprised, because what happened was that I ended up liking the sequel more than the first movie. Maybe, it is because the second is fresh in my mind, or maybe it’s because the second one dealt with various social problems, and the characters felt a little more refined and complex. Plus, it was nice to see Zac Efron’s character facing problems many young people after college might be facing as well. With those aspects, Neighbors 2 feels like the grown-up sister to its predecessor, but just as energetic and fun!

Mac and Kelly Radner (Seth Rogen & Rose Byrne) are pregnant again, and with baby number two on the way, they have purchased a new house and are trying to sell their old one. But with all that realistate stuff they don’t understand, they end up owning two houses for 2 weeks and the selling of the old one faces problems when a sorority, started by Shelby (Chloe Grace Moretz), moves in next door! Because Shelby and her two sisters have been the unpopular girls for the entire high school, they decide to create a sorority that is able to throw parties without the need  for women to be sexual, or in other words, without guys.

Then there is our favorite fratboy Teddy Sanders (Zac Efron), who after college has sort of lost his way. And even though he still lives and hangs out with Pete (Dave Franco) and his friends, others have moved on with their lives. And with Pete newly engaged, to a man!, Teddy has to find a new place to live and figure out his life. First of all, I found the character growth of Pete between the movies to be brilliant, and secondly, it was interesting to see Teddy with low-esteem, because in a way, it made so much sense. He was cocky and egoistic in the first movie, and he was the stereotypical fratboy, but now, after everyone else has their lives together, Teddy still has the same job and refuses to let go of his younger self.

What the movie does brilliantly, even though it’s a comedy, is showcase human friendship. We have of course Mac and Kelly, who are quintessentially married best friends, we have Shelby and her sisters, and then we have Teddy, with Pete as well as Mac. I like that despite the madness that takes place in Neighbors, the human relationships are the center and the strenght behind the characters. Sure, we have plenty of comedies with friendships as the center, but somehow Neighbors elevates it, and I love the kind of parents Mac and Kelly are, opposed to the perfection that is sometimes given for parents.