I’m very particular with my music. I tend to listen to mainly the same artists on rotation and it’s only recently that I’ve stuck to certain artists longer than six months. One of those is of course Dermot Kennedy (who I saw live in December and I just cannot express how happy it made me), and the other is Harry Styles. There are others as well of course but those are sort of the two British guys I’ve been listening to a lot. So much so that I have bought their vinyls. Yes, I got both Harry Styles’ albums on vinyl during the corona pandemic. Will be eating grass soon but hey, it was totally worth it!

THE BEGINNING / ONE DIRECTION

Let’s time travel back to … not so recent past. I’m gonna say about ten years ago (knew this by heart) Harry Edward Styles popped into my radar. I was a huge X-Factor UK fan and he happened to addition. He then ended up in the most successful boy band of the last decade, One Direction. No shame here, guys, I was a fan. I know all their names and I’ve followed two of their careers eagerly, Niall Horan and the man of the hour, Harry Styles.

To say Styles was my favourite from the start isn’t a lie. He had the strongest voice (Liam always started the songs but Harry got the more important parts) and yet he had so much room to grow too. I’d say his voice matured during the boy band years a lot and it’s no surprise he now has the most successful solo career. Anyway, for a throwback video, you can watch this X-Factor performance – ah, the memories. 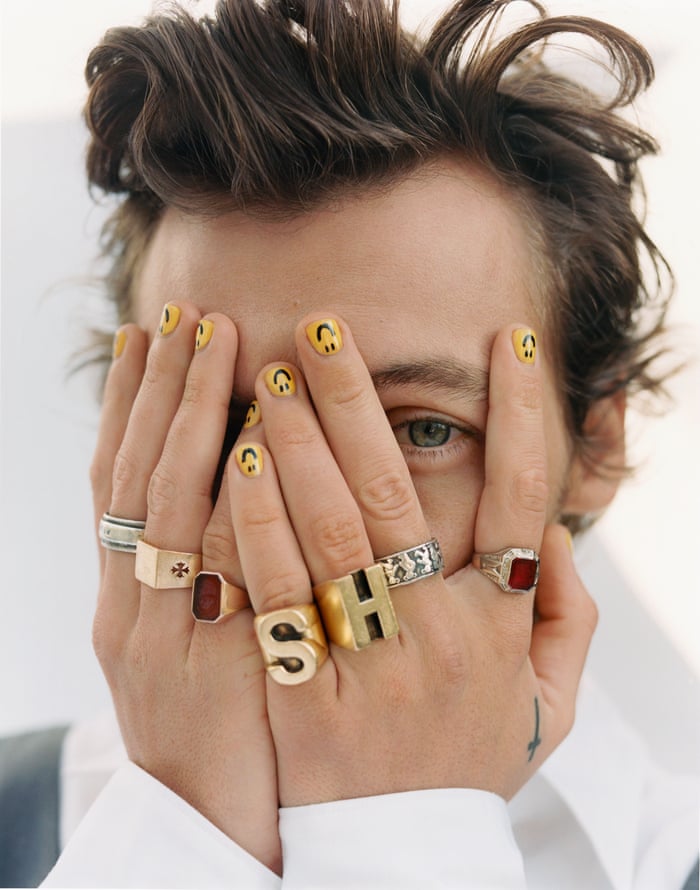 It’s weird not to talk more about One Direction since it’s how he got started. So I’ll shoutout two of my favourites from the band’s discography. Honestly, one is What Makes You Beautiful because it’s so cliché and I love it. Can’t fathom the fact that this song will be 10 years old in the summer of 2021… crazy. And then there’s Story of My Life, in my opinion, the strongest song they ever had. Partly because it also had a completely different vibe but also maybe because Harry carries it so well. I might be a bit biased.

The band famously broke up in 2016 a little after Zayn quit. He went to do his own thing and so did the others. Harry put out his debut single Sign of the Times in 2017 and in May that year his self-titled debut album followed. The album was great, is great, topped several charts and did super well. Two years later Fine Lines followed, it did pretty well too.

Fine Line debuted atop the US Billboard 200 with 478,000 album-equivalent units (of which 393,000 are pure sales) in the week ending December 19. It marked the biggest week for a pop album by a male artist in over four years.

Picking five favourites from two albums will be difficult. Not only do the albums have a different vibe, they appeal to me during different times (I list a mixture of mood songs here today). It’s almost as if one compliments the other and I cannot wait to see what Harry comes out with next. Also part of me is hoping that I do get a chance to see him live. Seeing Dermot Kennedy’s live performance from pretty much front row, I know I’ll want to experience something similar again. Though I guess getting in the front row for a Harry Styles concert will likely be impossible. And then there’s his style! My gosh! There are definitely musical artists that express themselves through fashion in a far bolder way but for Harry, who is in the mainstream, it’s definitely a bold move. Not to mention a justified one! His music style is a mix between the old and the new, so his style is also a bit of both. I appreciate that a lot. Another thing I appreciate is the lace ensemble he wore for his Brit Awards performance – stunning!

I guess for now that is it. Could go on forever but the Top 5 needs to be done and honestly, I’m impressed I managed to do this at all. I will shoutout Kiwi and Golden which didn’t make the cut this time around but both are great songs. Just wanted to mention them here. Alright, let’s listen to some songs!

“Oh honey I’d walk through fire for you, just let me adore you”

“Apologies are never gonna fix this. I’m empty, I know and promises are broken like stitches”