Another month brings us another bunch of favorites that I want to share with my lovely readers who have made March into the blog’s most successful month ever (not counting in the mind-blowing January of 2013). Have I mentioned how awesome you are because I really should mention my gratitude for you all more often. That being said, next to my constantly growing viewership there were obviously lots of other great things for me to enjoy this month. 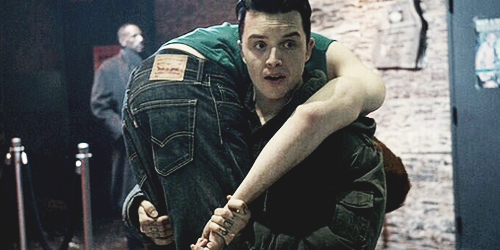 Are you all sick and tired of me talking about Shameless? Well, if so, skip this paragraph and if not, join me while I rant about my endless appreciation towards one particular guy – Mickey fucking Milkovich! This character was already mentioned in one of my Favorites posts but since he’s constantly growing storyline in season 4 just keeps making me happy and all proud and shit, I just can’t reign in the love for him.. and I shouldn’t need to. Latest episode brought so much moments for him, mostly good, that I can’t help to fear what the writers might do with him next season.

Here’s another show that is writing TV magic for me, True Detective and all its brilliance behind the show. I talked about it in my post a lot so I don’t feel like I should rewrite my thoughts again but I must mention it as my favorite of March. As far as TV-shows go, I think True Detective is the strongest newcomer this season and I really want to see more. With its strong beginning  I can’t help to fear for its hard fall with the next season, I remember well my excitement for American Horror Story and it seems it has declined in quality season after season (though the second season had a stronger plot, I still think the first season was more together as a whole). Considering its True Detective though, I’m thinking it will get better and better!

I haven’t featured a fellow blogger in my favorites before but I felt like it was time to give some credit to Film Flare! Every time I see a post up on Sofia’s site, no matter what I’m doing or what I’m watching, I’ll pause my life to see what she has posted and I’m never disappointed. She has a flare for graphics and seeing how much work she puts in her posts, as do all of us!, I simply have to give her a respectful nod.

Though it happened technically in February, I have yet to mentioned the fact that Bryan Greenberg favorite’d my tweet and I squealed. I mean, his character from One Tree Hill was probably my favorite supporting role on the entire show and well, over the years I watched his work and he has yet to let me down. So I’m definitely a fan of his (I mean have you seen Prime!?) and now I’m the kind of fan who can say that Bryan Greenberg likes the fact that I call him fine… Since I watched almost no movies this month, considering I usually watch a lot more, there aren’t any movie related favorites for me to talk about. I did mention The Maze Runner in my latest Commercial Break post and it’s pretty much the only movie-related thing that seems to be making me excited. I credit this lack of enthusiasm to the upcoming deadline of my thesis – I have about a month to get my shit together and it ain’t looking good guys.. so I do apologize if there’s going to be a lack of posts in April. Though I pretty much broke my record in March by putting up 13 posts, I guess I could call that a favorite – my own motivation to write! But for now, I must get to my more important writing because apparently, that thesis is not going to write itself!