I want to curl up into a ball and rock myself back and worth until I’m rid of these feelings. I want to hug Casey Affleck, and slap him at the same time, because he managed to break me in a way that I wasn’t expecting to break. I want to not think about the feelings, the hurt, the subtle reveal of heartache, because every time I do, I manage to break myself again.

Part of me knew what I was walking into when I sat down to watch Manchester by the Sea. Part of me was completely unaware of the emotional roller coaster I was about to ride – the one where you can’t tell when you’re going down when you’re already at the bottom. That is how I felt after watching Manchester by the Sea, I had hit the rock bottom of something dark and deep, and there seemed to be no escape route.

Lee Chandler (Casey Affleck) lives a very routine life, working as a maintenance guy and living in an one room apartment in the basement. He seems quiet, keeps to himself, but only seemingly so, because underneath his exterior is a very broken man. One day he gets a call, his brother Joe Chandler (Kyle Chandler) is in the hospital, but Lee doesn’t make it on time, and when he arrives, his brother is already gone. He seems to be taking the news relatively well, and it is later revealed why that is.

When Lee has to stay for a while, for various appointments, including a meeting with Joe’s lawyer, he gets some shocking news: he is appointed the sole guardian to his nephew Patrick (Lucas Hedges). The news comes as a shock, because Lee is expected to move back to Manchester by the Sea, and that’s when the emotional roller coaster starts its slow, and eerie decent into the bottom. 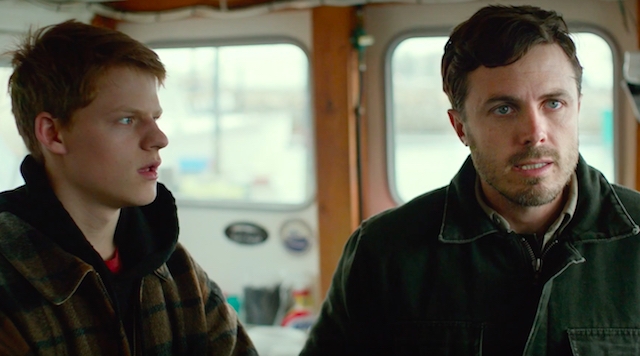 The past is presented in various flashbacks throughout the movie, revealing small moments between Lee and Joe, as well as Lee and Patrick. We learn early on that Lee’s ex-wife is still living in Manchester by the Sea, and we are revealed that they have three children together. We get to know Lee’s past, while we see him in the present time, struggling with something, and coping with the current situation. But it’s not all a sad and an emotional wreck, because the dynamic between Lee and Patrick is actually filled with quite a lot of dark humor. And while the movie doesn’t scream funny, both Casey Affleck and Lucas Hedges manage to deliver humor from out of nowhere, delivering a little bit of lightness to a very heavy movie.

While Casey Affleck’s performance shines in Manchester by the Sea, obvious since the beginning, he is surrounded by other great actors, who all get to shine just as bright. Lucas Hedge is one of them, a young and talented actor, who we have seen in Wes Anderson movies, delivers a very rare character among teen characters with similar struggles. He seems unaffected by the loss of his father but he is coping in his own way, and there are moments in the movie, where we almost don’t see him, but we are aware of the fact that he is hurting. He also has a few very humor filled scenes on his own that stand out,  but he is clearly the strongest when he is sharing the screen with Affleck.

Another, quite a small yet very important character, is Michelle Williams’ s Randi Chandler. And while she is great in the flashback sequences, she explodes at the end of the film, delivering one of the most powerful scenes in the whole movie. Thinking back, I think that’s the moment where I started to suspect that it was all heading towards the bottom, and there was no way out from there. I also think that based on those final moments of that scene alone Williams deserves an Oscar, because it was the rawness of that emotional speech, and the reaction of Lee’s character, that gutted me completely.

While I have not seen Margaret, also by Kenneth Lonergan, the director and writer of Manchester by the Sea, I think he has a wonderful skill for emotional story telling. Where instead of the facts, the emotions carry the movie, and the facts are just there to support those emotions. Manchester by the Sea was subtle in its emotions, as I’ve mentioned before, and it took its time to deliver the message. The plot was woven into a story that gradually built towards that gut wrenching scene, and the after math was what delivered that very difficult message.

It has been over two weeks since I saw the movie, and I still think about it, or honestly though, struggle to not think about it. Its impact on me is definitely not the strongest it could be because the plot has elements I’m not connected to emotionally. But if something like that could affect me on such a level,  I could not imagine how Manchester by the Sea affects those who are connected to its plot. Also, despite the emotional wreckage the movie left me in, I feel like I need to see it again… because I have feeling there are so many lawyers to the movie to discover upon rewatching it.