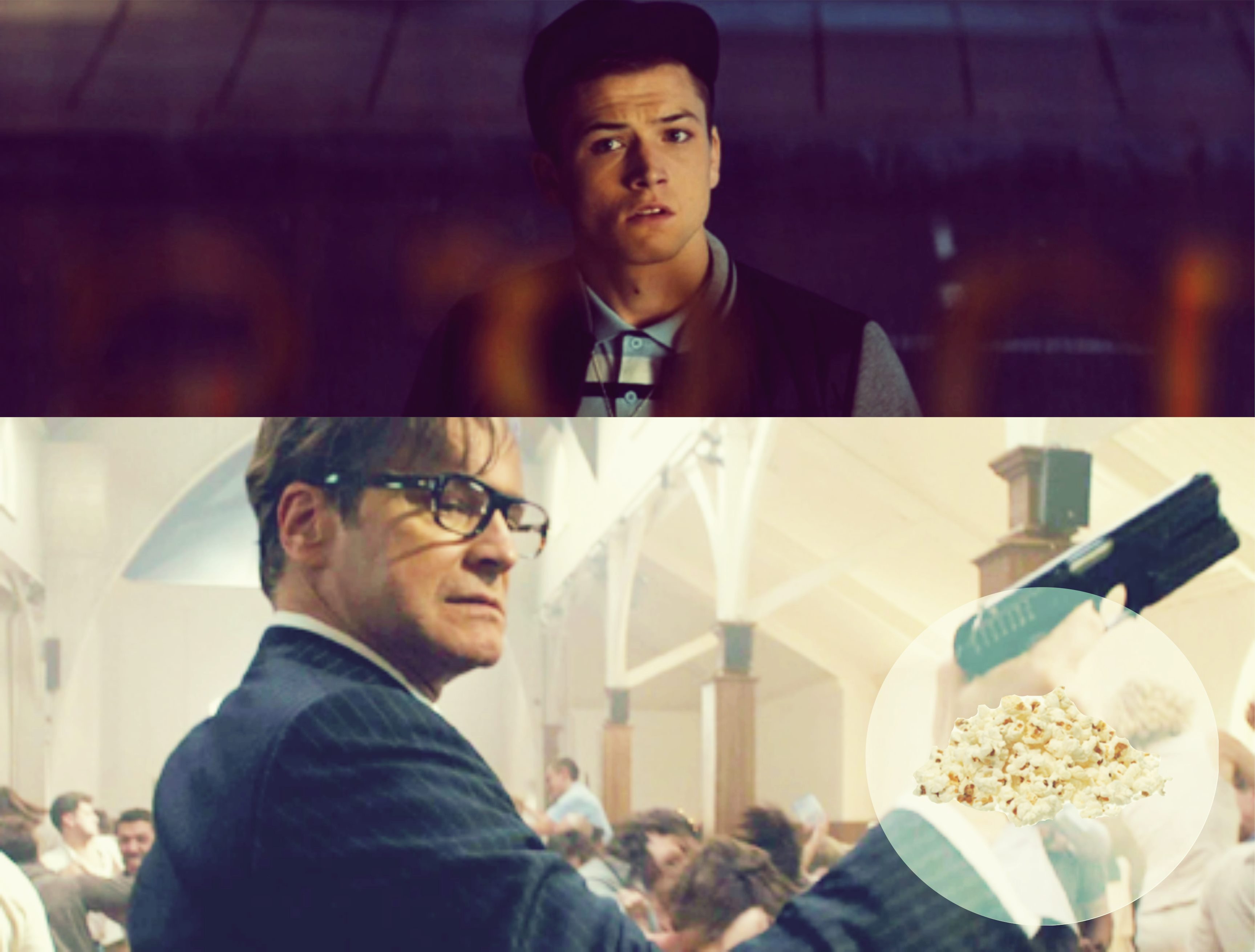 Be aware of spoiling yourself!

The British have had claim over dashing spy men ever since James Bond started wooing women’s panties off and now they have introduced a new breed of men, Kingsmen. They are, for the lack of a better word, modern knights, who also like to drink martinis and have butt sex with blonds!

With Kingsman, I have only one particular beef I must settle before I start my review and it is its running time. It’s not that I didn’t enjoy the two hour movie, I did, but a little part of me can imagine that it would have been a bit more intense with a little less time to show every little detail. Then again, there’s a quality to the detail that I didn’t realize before it was pointed out to me. Something I must investigate closer! Anyway, for me, Matthew Vaughn has come a long way since Kick-Ass, which I by the way, disliked.

Kingsman: The Secret Service tells a story of a veteran spy Galahad (Colin Firth), who recruits the son of the man who gave his life for him to be the new Lancelot. That boy happens to be the unprivileged and misbehaved Eggsy (Taron Egerton), but the misbehaving part isn’t the problem because the boy is actually the sweetest thing in the world. So all while Eggsy goes through his recruiting process with annoying privileged youths, Valentine (Samuel L. Jackson) wants to save the world… by killings lots and lots of people! There is solid reasoning to Valentine’s plans, people are killing the Earth by overpopulating and overproducing crap that is slowly but surely going to destroy our planet. That is the truth, that is what is actually happening now and there’s no way of avoiding it since the carbon dioxide levels are beyond reversible. So in a way, Valentine as a villain is somewhat controversial because his intentions are actually reasonable.

Now, the strength of Kingsman is not so much the plot but the characters it introduces. Colin Firth as Galahad is the baddest motherfucker you’ll ever encounter, and you wouldn’t want to encounter him, ever! He kicks ass, and considering it’s Firth who does the kicking, it’s the coolest thing I’ve seen in a while. Everybody, including me, will be talking about the church scene, trust me, even people who aren’t necessarily movie fanatics will be talking about the church scene – that scene is legendary! That scene made me cringe happily in my seat which means that scene is hotter than all that sex stuff in Fifty Shades of Grey combined! The thing that followed, Galahad being shot by Valentine, was heart breaking and yet, refreshing. You don’t often see the main character killed off before the end game, especially when that main character is portrayed by Colin Firth… because he is god!

Close to god-like entity is Taron Egerton as Eggsy, a fresh face to the movie scene, Egerton is charming and adorable while kicking ass left and right. He is sweet, he also happens to be very good looking and his jawline just happens to be the cherry on top to the whole situation. Though he does look dashing in a suit, I actually preferred his street style and bright yellow jacket as it seemed to suit his personality a lot more. In other words, Egerton holds well on his own among the big names we are used to, stands out next to Colin and well, almost steals the show if it wasn’t for that amazing church scene. Sadly the final battle just doesn’t come close to the stylish take down of religious Americans in a manner of pure brutality, male or female, Vaughn doesn’t care who, just how well they are killed visually.

There’s many others to compliment, Mark Strong for instance is great as Merlin and getting the recruits through their training as well as helping Eggsy in the final battle. Michael Caine is a hit and miss for me, as the character never designates as important nor dominating, plus he is an asshole in regards to the dog-killing scene. Sofia Boutella as Gazelle is stunning but I’m not the biggest fan of the whole blade-leg thing, though it did look visually stunning in many of the scenes. And speaking of stunning, the first action sequence with Jack Davenport as Lancelot in that lodge, looked great as well. I love to see British men in suits kicking ass, it just looks so damn classy and smart!

So what can I say, I loved so many elements of Kingsman: The Secret Service that it’s hard to focus on anything else. It’s smart, it’s refreshing and it’s very classy with the addition of bad-ass to the side. Sure, I would have maybe wanted it to be a little shorter, and a bit more thrilling but that’s Vaughn’s style I guess because his movies always feel a bit dragged for my taste. There’s nothing bad about it, it’s just his way of telling the story, probably a very detail oriented story which might not resonate fully at the first viewing. Indicating, for a certainty, that Kingsman will get a second viewing from me for sure – if not for the details, then for Colin and Taron because, hot damn, gimmie some more of them, please!