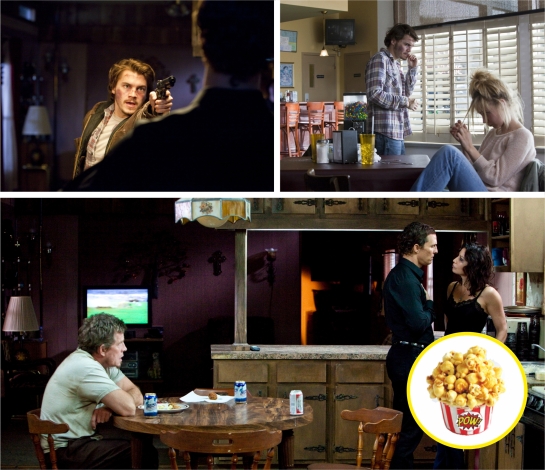 Where to begin? Honest to god, I don’t know where to begin with Killer Joe because the movie caught me by a surprise beyond surprises that I’ve been used to. Of course the fact that I stayed away from the Killer Joe’s trailer and everything plot related, even dismissing to read reviews other bloggers had written (sorry about that, I just didn’t want to ruin my experience which turned out to be a good idea) – without knowing anything, in other words being in a total abyss of knowledge, Killer Joe hit me in the face and I was positively shocked by the things I witnessed.

The element of surprise was what made Killer Joe jump from good to amazing, other wise I don’t know how much I would have enjoyed its not so subtle violence and plot twists that were around the corner. I know this for sure because I watched the trailer just now and it gives away so much, I don’t get it, why ruin it for those who enjoy the surprises or discovering the surprises themselves along the way? There is nothing good in showing the entire movie within two and a half minutes and then expect people to love its plot twist elements. I’m getting side tracked over here, the point is, Killer Joe had some extreme violence that I happened to love, great acting from the entire main cast and an ending that left me wondering, which is something I like about movies in general.

Killer Joe’s main plot is revolving around money, everything is about money in this movie and debts to different characters. Chris (Emile Hirsch) owes money to a bad guy, who is not very relevant to the main story and in order to pay him off the plan to kill his mother for her insurance money becomes the plot’s foundation. The following element is of course Killer Joe himself (Matthew McConaughey), who instead of getting the down payment for his job of killing the mother, gets to hang out with Chris’ little sister Dottie (Juno Temple). And when I say “hang out” I mean have sex with because that is what Joe is after, that and money of course. Now, this is the basic premises of the movie and it starts to build on top of that and continues to a point where there are couple of plot twists in the very end. What makes Killer Joe a brilliant movie, is the way this plot is presented and how twisted the minds of the characters, Joe in particular, come across in certain scenes.

McConaughey does an amazing job of playing a psychopath, I’m stating that he is one based on the things Joe’s character does – killing, getting off to things that are beyond normal and enjoying violence to a degree of unhealthy stages. McConaughey has never been my favorite, I find him a bit off putting and now I know why. Previously I had only seen him as a romantic lead but to be honest, a twisted killer suits him much better! He has that look to himself, that roughness in his face and the numbness in his stare that he can easily switch off by smiling like I witnessed in Killer Joe’s final scene. I’d appreciate him now as a bad guy and I never want to see him in a romantic comedy ever never ever again! Also, I’m late to the parade but he should have gotten an Oscar nod for that role.

Reasons why the movie might not have been as award worthy must be the fact that nobody really wants to award violence, psychopathic tendencies and portrayal of the members of an American family as a low-lives. Emilie’s and Juno’s teenagers have grown up in this world and they represent the trailer park youth, a bit stupid and clueless, willing to do things that are considered illegal and all this while their parents (and step-parent) are in the next room. I read a review after watching the movie that said it was humiliating for the family to have such characteristics but I feel as if it had not worked any other way. The reason why they were so open to “selling an under aged girl to a killer” was because they had no boundaries as people and I truly believe those type of families exist. Humiliating or not, Killer Joe seemed to have a certain element of reality embedded into its characters – even if at some points it seemed to be pushed over the edge but for a reason. And that reason might have been to get as many “oh-my-god” reactions out of the viewers because in the end, the shock-factor was what made Killer Joe stand out as one of my favorites.

I wanted to end with stating the obvious, Killer Joe is one of my favorite movies but I had to mention Juno Temple before wrapping things up. She is my age, actually some months younger, and I can’t believe her ability to come across as innocent as she did in Killer Joe. In a way, she portrayed a young and a bit living in the clouds type of a girl but had a certain clarity in herself. The final scenes were her moments of shining, with portraying this girl that she had been doing before, the ending totally dismissed her characteristics and flipped everything upside down. In a way, that final moment made her more like Killer Joe than any other character in the movie and this might have been the reason why he found her so mesmerizing. Therefore, Killer Joe’s success in my eyes was also its portrayal of broken characters of Joe and Dottie as “star-crossed-lovers” even though I found their chemistry on screen in some scenes extremely scary.