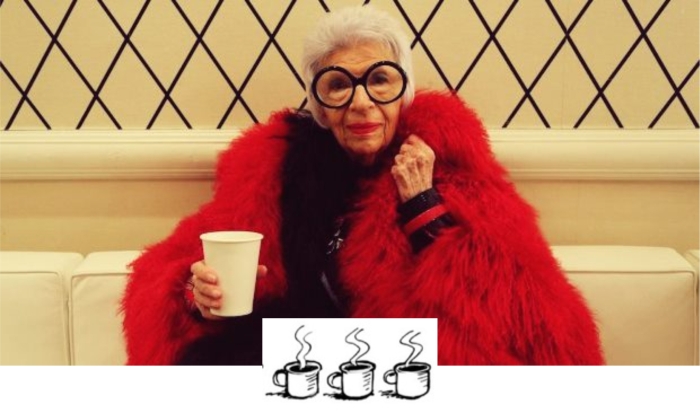 It has come to my attention, that I have an unexplained connection to fashion documentaries. I have watched The September Issue (2009) four times, watched Bill Cunningham New York (2010) twice, and though likely a one time event, I have now watched a documentary about Iris Apfel, simply titled, Iris.

My knowledge about documentaries is minimal to say at least, and it seems I gravitate towards a certain genre in the documentary world itself: an experienced individual who is greatly influenced by fashion. So, after a very long time spent away from documentaries (shame on me, really), I found time to watch one of Iris Apfel, a 94 old woman who is not afraid of color!

The joy of this was to see her talk about completely outrageous pieces of clothing or accessory, and wear them with pride. There are only a few individuals, who I have seen personally, who are as brave as Iris Apfel, when it comes to color, size and amount of accessories one could wear. To that extent, her documentary was bright, colorful and full of life.

I appreciated the fact that, despite the emphasis being on her courageous style and her past in the decorating industry, the documentary focused a lot on her marriage to Carl Apfel. Married for 67 years, Iris and Carl on screen together were the highlight moments and nothing beats Carl’s 100th birthday celebration, which, I have to admit, made me tear up a little.

On the other hand, and this by any means is not related to Iris Apfel herself, there was something missing that would have elevated the whole movie. Though interesting, and though so personal and sweet, Iris was not the best documentary I’ve seen, and I don’t even have that many to compare it to. Iris herself though, now, she is far from boring or mediocre, and an inspirational individual!