This review will have a few good words, and a whole lot of bad ones because Independence Day: Resurgence is this Summer’s best example of a disappointing high profile big budgeted sequel made just for the purpose of making a ton of money.

I’m technically a 90’s kid. Sure, I was born in the late 80’s, but all my conscious childhood was spent in the 90’s, and to be honest, I love the 90’s! There are so many fond memories from that time, so many great movies and TV-shows. And sometimes it feels like we can never go back to that time where everything was about exploring, enjoying and entertaining. And the reason we can’t go back is simple, it’s all about the money now.

Hollywood produced money-maker-cash-bait movies are everywhere, and Independence Day: Resurgence is a fine example how money drives people. Get a well loved movie from the past, use people’s fondness for childhood memories, and get that money-train on the way. Don’t think about the content, don’t dwell too long on the script, just get that movie on a big screen and see the money come in. Because a movie that is going to be made with 165 million dollars, has almost all the former characters from the previous movie, is definitely going to succeed, right?

Wrong! Independence Day: Resurgence, released on the 4th of July was a bust. It made millions, sure, mostly international millions, but it was still a failure because you can’t just go and make a sequel purely based on a whim. You have to build a story, stronger than the simple the aliens are back with a bigger ship concept, because that will not get the emotions running like the original  Independence Day did oh so well. And even though we have a lot of characters from the first movie, they feel fake and even though they try their best, I’m looking at you Jeff Goldblum, there’s really nothing great about this reboot I could go back and enjoy. 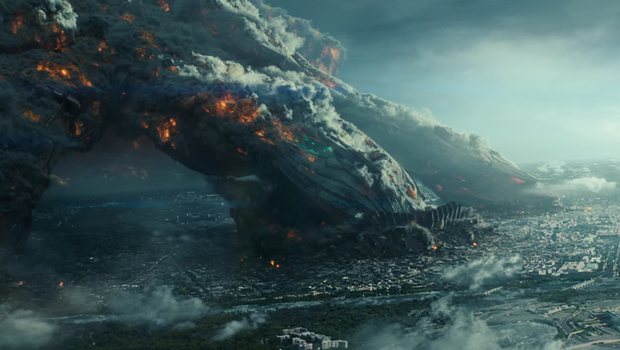 The biggest fault in this reboot is its ego. The kind of ego that believes it doesn’t need to do anything else except a lot of CGI and big explosions to have the same sort of impact the 90’s movie had. It throws us into the future, 20 years later, and expects us to be as emotionally invested as we were 20 years ago, and thinks it doesn’t need to add emotional backstories. Well, with that, it delivers an action packed, CGI filled alien invesion with no feelings! And it’s not like there wasn’t any possibility for it, there were many beloved characters, who saw their end in this reboot, who we all rooted for in the original. The problem was the direction, which was more focused on all the other things, than to take the time and give us a moment to be emotional. The whole movie felt rushed, and yet, it dragged on forever, and part of me wished it ended before it even got to its final act.

Another criticism towards Independence Day: Resurgance is the lack of Mae Whitman, who played the President’s daughter in the first movie. I’m hereby quoting a lovely lady from the 90’s, Vivian Ward, to express myself: “Big mistake. Big. Huge.” Now, I thought, maybe it was a scheduling issue, but no, Mae Whitman wasn’t even considered to be a love interest for Liam Hemsworth’s character and Hollywood strikes again. While I have nothing against Maika Monroe, I have a huge issue with making a reboot and making it “prettier” by casting somebody else in a role Mae Whitman would have been amazing in! She is gorgeous, a beautiful woman inside and out, who should have been the first and the only choice to play the grown up version of the character she played when she was a child!

With those factors, and the lack of feelings I had during the screening, I was surprised that I actually enjoyed some of the humor Independence Day: Resurgence put on the table. I don’t remember any of it now, but I remember laughing at some parts. And ironically, the best character for me, was the only main character that was created from scratch for this movie: Jake Morrison (Hemsworth). He at least had some tension, some heart and passion, which, and I’m surprised to say so, was sort of thanks to Hemsworth himself. But don’t even get me started on Dylan Hiller (Jessie T. Usher) because when a character’s mother dies, and you feel nothing, then you should recast and reshoot because his character was the biggest disappointment in the reboot.

So you would expect that if the emotional aspect of the story is left on the side, the action would take over and blow us away? Well, wrong again. This movie didn’t offer anything refreshing or new, the action was choppy and the final stance felt like a cartoon. I will applaud them for the female power in the end, which was a nice move, but other than that, meh. With so much going on, and so many characters and storylines, and so much screen time, Independence Day: Resurgence did nothing else except destroying landmarks and commenting how much bigger and badder and more undefitable the new wave of alien attacks was. AND then a white ball appears, and it’s an alien as well, and as far as movie solutions go, it was the funniest thing I’ve ever seen. But was it really supposed to be funny?