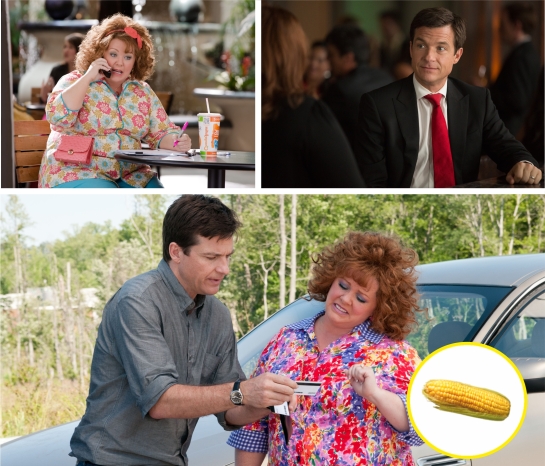 Identity Thief marks the first 2013 release I have gotten to see and well, I’m just the opposite of thrilled of that fact. Seriously, what was I thinking with actually watching this movie when I’m well aware of my continues dislike towards the comedies Hollywood is proudly pushing down my throat? Who knows, because among the few laughs I somehow managed to get and the smouldering Jason Bateman, who I usually enjoy, Identity Thief is yet another comedy I did not like.

I must admit, and get the positive out of the way, that the few great moments did happen while Melissa McCarthy was on the screen. She’s a funny woman, I’m sure of that but I keep seeing her in the same kind of roles and it just frustrates me. Jason Bateman is no different, he keeps playing a guy who has a decent suit worthy job and sometimes a family to support. I guess he has that corporate look to him or something, plus, he looks good in a suit but that doesn’t excuse the fact that he is type-cast over and over again. Another haven’t I seen this before moment was the entire plot of Identity Thief that came really close to the 2010 Due Date with Downey Jr. and Galifianakis: an incompatible duo has to road trip their way to their destination and things go wrong. We have Bateman as the less scruffy Downey Jr. and McCarthy as the female Galifianakis – change the movie’s name, the mission and you get yourself another mediocre comedy that makes no sense.

There’s no need to describe the plot because the title of the movie pretty much says what’s going on – and since both leads are regularly type-cast, there’s no question who the thief is. What bothers me with this comedy is the fact that they threw in a drug related incident and a bounty hunter which both led to absolutely fucking nowhere! They kept chasing them (Jason and Melissa) and shooting each other until they got caught by the police and that was it. I know this argument doesn’t make sense and I get the fact that no comedy can go without a serious problem but was that all even necessary!? Why not keep things light and funny without the car chases and bad guys with accents because for me personally, the main plot would have worked just fine without the mess of the side stories that didn’t even get a proper ending.

Now I’m going to sound like a mean person, as if I haven’t done that so far, because I really didn’t appreciate the main plot as well. I guess what bothered me with this was the fact that they tried to justify the thief’s actions by giving her a really sad back story. For me the problem wasn’t the fact that it was a bad story, not at all, it made a little bit of sense to be honest, but it was the collision of funny and sad that wasn’t working for me. The movie wasn’t really funny to me cause I’ve seen it all and I’ve heard most of it before, so when the whole sob story of a bad childhood entered, instead of balancing the movie it kind of overwhelmed the humor. Plus, the fact that they managed to go from a sad scene to a scene where Melissa’s character literally influences Jason’s character to a point where they decide to steal an identity, made me furious!

I get unconditional friendships, Due Date already gave us that but when it comes to a criminal, cause let’s face it, that’s what she was, I just don’t get the appeal. Yes, she was funny, and maybe her misfortune was also funny, but at the end of the day Identity Thief is about a woman who steals a man’s identity, uses all of his credit and manages to become friends with him! Then they decide to steal an identity together, while getting caught and on top of that, they then escape from the cop car. This all takes place while the bad guys are chasing them with an equipment that they explained in a dialog, because the screenwriter cleverly anticipated the viewers asking the question: how the fuck do they find them? Then the thief saves Jason’s life by getting hit by a car, which apparently is a sign for all’s forgiven and that means he doesn’t want to turn her in – yes, that sounds like a fun movie!

Oh well, I guess there’s no point of looking for logic but that’s what happens when the movie isn’t really funny. Instead of laughing you tend to look for something to hold on to and comedies don’t have it anymore. I could also blame myself for watching this movie while being sober because while intoxicated I’m less inclined to look for logic but I’m not going to do that because Identity Thief should have known better. So for me, all comes down to the plain old logic and the fact that comedies I like don’t have outrageous plots and  ridiculous characters with whom I never seem to have anything in common. And also, can we just have a comedy that doesn’t involve puking?

PS: The small thing I loved in the movie was seeing Melissa’s husband in a small role, it’s nice they keep popping up together but that doesn’t really influence my final rating.