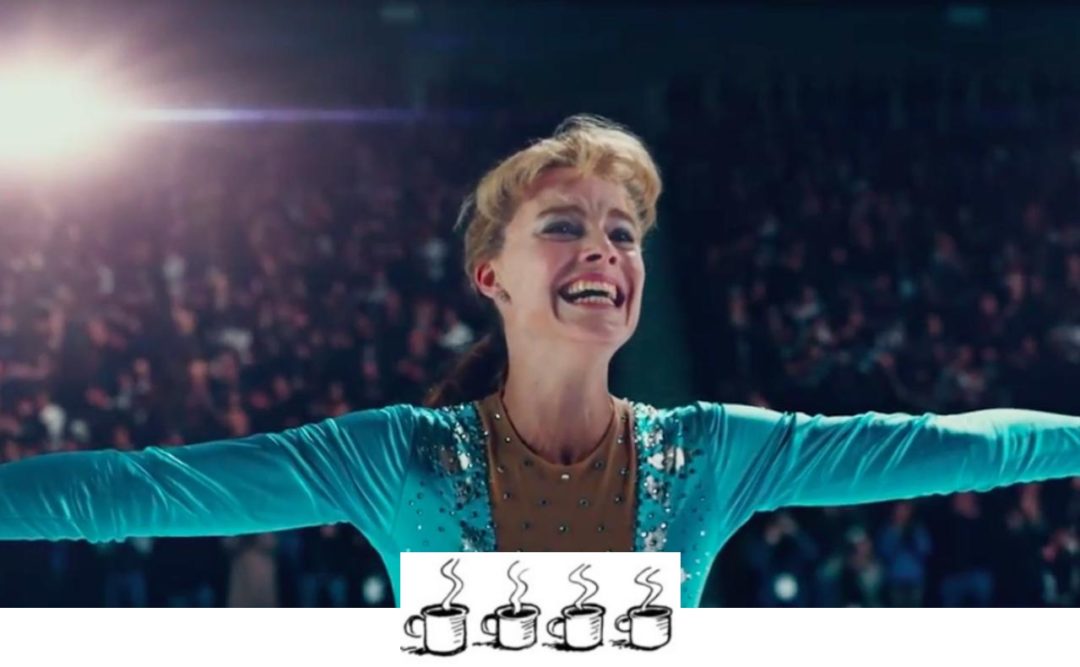 My knowledge of Tonya Harding was non-existent before I watched this autobiography-type movie of her life, career and possible destruction of both. I say possible because at the end of the day, the doubt remains. Did she? Or did she not? And I feel like Margot Robbie managed to amplify the mystery by playing an innocent, yet dangerous young woman, who just wanted to skate.

Part of me liked I, Tonya a lot, and all that love is especially aimed towards the performances of the entire cast. There’s no weak link here, everyone does exactly what they are expected to do, and some even manage to steal the spotlight away from the always stunning Margot Robbie. Before I get to her performance, there are three others I want to point out.

Allison Janney is a must mention, not just because she has won every award for it but because she portrayed LaVona Golden, Tonya’s harsh and unloving mother brilliantly. She manages to be the villain of the story, but there are still moments when she looks like the mother nature intended her to be. She cares, deep down, she really does care, but it’s hard for her to show that motherly affection and instead, she offers Tonya only coldness. Then there is the loving/hating boyfriend, Jeff Gillooly, portrayed by Sebastian Stan, who definitely needs more attention for his performance. He has a similar role to Janney, he is simply more loving but does have his moments of anger, and it’s scary how quickly Stan manages to switch between those two.

Third, and probably the biggest spotlight stealers of the film is a guy I have seen and remember, from a single episode of a show I watched a few years ago – Paul Walter Hauser. He had a small role in The Night Shift, as a man who died because of a stupid work-accident, and I cried as if I’d known his characters for three seasons. You don’t see those kinds of character actors often, but Hauser is one hell of a power house, and his Shawn in I, Tonya, is all the proof you need. He is so natural on screen, so effortless, it’s actually a little disappointing there’s not more of him in I, Tonya.

But that’s alright, it’s not Hauser’s show anyway, it’s all about Margot Robbie and her transformation into Tonya Harding. I’ve always liked Robbie, even considering the fact that I hated Suicide Squad, and I’m glad she got herself this movie. She produced it herself, she played the main character, and she made it all work. The story itself is interesting, and like I said, there is still the whole question of did she, or did she not, but there’s also a little bit of muddled clarity. Some of it is probably true, maybe not all of it, but definitely some of it, and it’s hard not to root for Harding in the end.

Probably the most heart breaking scene comes when Harding is banned from skating, forever. Her reaction, her sadness, it almost makes you wish it all didn’t have to come down to that. At the end of the day, it’s still about money and beauty, and Tonya apparently had none of those, she just had her skill, and determination. She made some bad choices along the way, fuelled by the fact that she never had a loving relationship with her mother, and that the skating world didn’t deem her fit as the best skater. Even though, she clearly could have been the best of the best. Which is why all of this is especially heart breaking and makes you wonder how toxic the world of ice skating really is.

The movie, which showcases the skating brilliantly, and very true to reality, does feel a little bit off the mark. And it’s only because I found it a little hard to believe Tonya wasn’t loved by the skating community, and the judges. Reason. Margot Robbie is stunning, and it’s not really her fault that she even manages to look stunning in those awful 90’s hair styles, she just oozes beauty left and right. Though the movie does try to balance that with verbal insults, and an attitude problem (probably all true), but when it comes to skating and looking the part, it’s hard to look past the fact that Robbie simply shines through all that. Is it something that stopped me from enjoying the film? Definitely not! I, Tonya is still a wonderful film, through and through, and like I said, all the actors give their best and in a way, that’s all there is to it. It’s just a shame that all her best was never going to be enough for Tonya Harding.