I have mentioned this in passing but one of the reasons I really enjoy Kdramas these days is because they feature a lot of traditional romcom elements. The kind that used to be very present in western cinema and TV… but has slowly disappeared. Granted they are mostly silly, sexist and create unrealistic expectations in women but I don’t care. I miss romcoms a lot. So when I heard they were going to make a popular book The Hating Game into a movie I was excited.

First of all I want to emphasise that I didn’t set myself out to dislike The Hating Game. I had some expectations and a little bit of reservations but other than that I was ready to enjoy it. And to be completely honest, I didn’t hate it per-say but I didn’t want to miss the opportunity to go for that world play. It just has a very good ring to it. But why did I dislike The Hating Game? Luckily the reason itself doesn’t even have anything to do with spoilers so I can tell you this without any reservations. The Hating Game lacks chemistry… and it needs a shit ton of it.

The movie stars Lucy Hale from Pretty Little Liars who is an okay actress. She has this cute little face, she is petite, she looks adorable. She portrays Lucy Hutton, an assistants to the co-CEOs of a publishing company. Then there’s Austin Stowell who I have no recollection of but apparently he was in Whiplash. He portrays Joshua Templeman, a tall, brooding man who is the other co-CEOs assistant.

They sit across from each other and they HATE each other. A feeling they pretty much don’t even try to hide and the whole office complains about them because Lucy and Joshua are so LOUD with expressing the HATE between them. Long story short, there is a thin line between hate and love and as a wise woman Rachel Greene once said, the line could be a scarf. The Hating Game doesn’t have a scarf but it has an elevator. But as tensions reach boiling point and an innocent elevator ride turns into a steamy kiss, Lucy begins to realise just how fine a line there is between love and hate.

BLAND FROM THE START

Long story short (this by the way is all written in the storyline of the movie on IMDb) their hate gets muddled with sexual chemistry. Yet there’s this huge fucking problem with that… Lucy Hale and Austin Stowell have no chemistry! They sort of fit together in this cute way but the lack of sexual chemistry between them was irritating. Usually when you have a steamier romcom you feel giddy with excitement. I was down right embarrassed a lot during watching this. No joy of seeing these two people finally going at it.

I’m not 100% certain if its just the actors who are at fault here, I feel like the casting is a little off from the gecko. Lucy Hale is too sweet for this kind of hating game type thing in the office. She just doesn’t scream that sort of energy. Austin Stowell is… bland? Can I say that without sounding rude, I hope I can because it’s not meant as an insult. He just embodies the exact type of white man who is this tall, polished, fairly muscular and incredibly boring. Like sure he is handsome but he doesn’t have that something special to create that sexual tension. 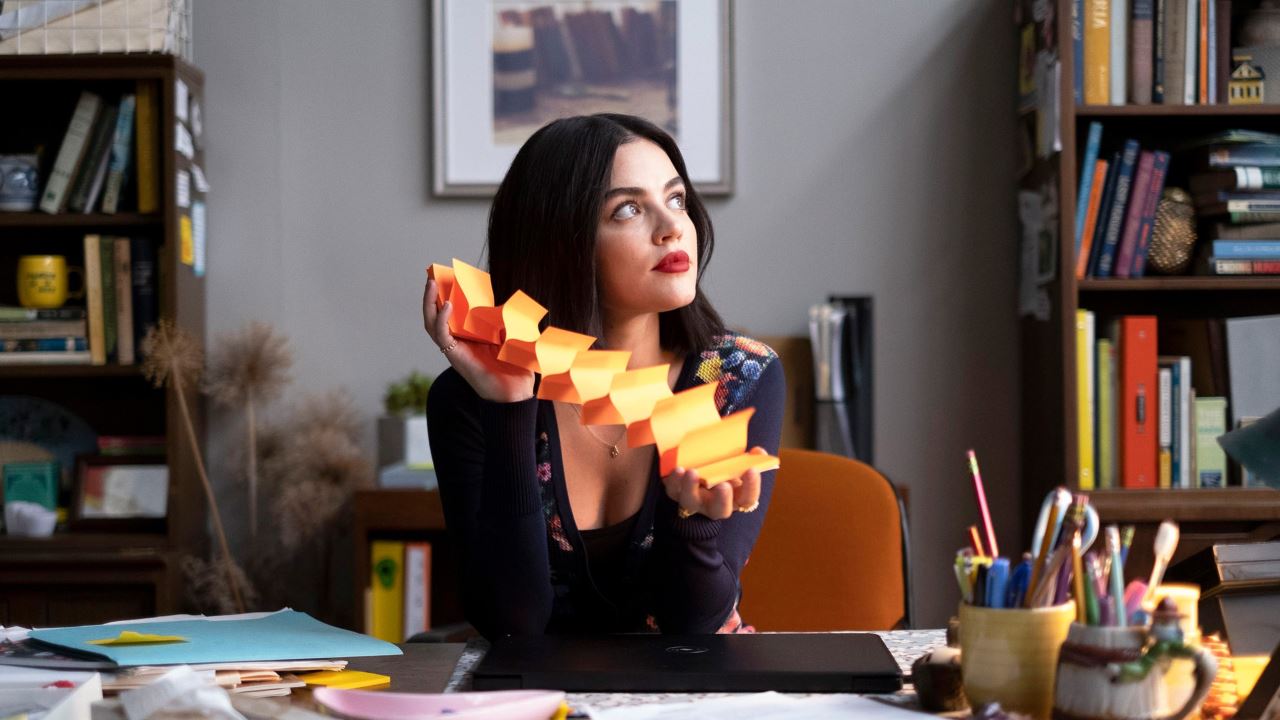 By the way The Hating Game by Sally Thorne is one of my favourite romcom books. I don’t remember all of it but I am pretty certain the steamy stuff didn’t happen so soon. The movie version feels rushed and with a genre where the outcome is so blatantly obvious anyway, you want at least the journey to the end be fun and exciting. To be fair the script was adapted by Christina Mengert who doesn’t have a lot of movie writing experience. Her first screenplay was for Peace, Love & Misunderstanding which by the looks of it isn’t as good. The man behind the camera (why men keep directing romcoms for women is a mystery to me) was Peter Hutchings and he also hasn’t done much. He wrote Can You Keep a Secret? which was actually a bit entertaining but still super bad.

Now that I think about it… I don’t remember any of the supporting characters or roles. The main conflict also feels pointless and too generic, at least the parts of it I remember. What a sad realisation right before I’m ready to wrap this review up…

The Hating Game had so much potential to be a well served hate to love romcom my heart has been missing. Instead it was a bland mix of miscast leads who delivered a script that rushed things to the inevitable endgame. As I said I didn’t hate it per-say but there’s not much like towards it either. I wasn’t even lusting after Stowell but that could be all me. If you like such a character more than me then maybe The Hating Game is just the right fit for you. Though I still think it is too bland all around.