*come and get your looove & tiny spoilers*

To set the mood of this review, I love Guardians of the Galaxy!  There, that’s what the whole review is going to be like, me gushing about everything GOTG related, me defending its faults (I don’t actually know any but I’m defending those nonetheless), sharing my feels in every paragraph and all of that will take place while Awesome Mix Vol. 1 is playing on the background.

With any other movie I’d start by commenting on the characters and actors before getting to the other elements such as CGI and music but things are going to be different with Guardians of the Galaxy. Because though I’m entering Chris Pratt fangirl extreme levels, I’m also becoming widely addicted to 70’s and 80’s music and apparently, I’m not the only one. According to a trustworthy site (Wikipedia of course), Awesome Mix Vol.1 reached the top of Billboard 200 chart and therefore became the first ever sountrack, compiled entirely with already previously released songs, to do so. There’s a reason this soundtrack made such an impression, and it’s the fact that it’s nostalgic and unexpected for a space adventure movie! That being said, the soundtrack is, in my opinion, so cleverly interwined with the plot that it almost stands out as a character itself. 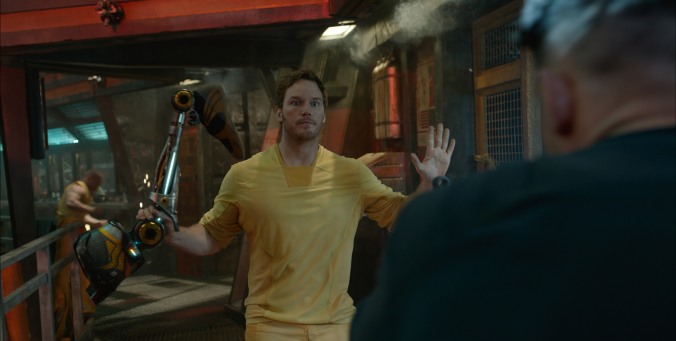 Guardians of the Galaxy starts off on Earth, a young Peter Quill is listening to his Walkman before he is asked to say goodbye to his mother. After handing Peter a gift, she passes away and the boy runs off only to be taken by a space ship. Then we are quickly taken into the present time and we officially meet the leading man, Peter Quill (Chris Pratt), who’s character introduction is one of my favorite things in the world right now – dance moves accompanied by Redbone’s Come and Get Your Love. There is so much to wonder about in regards to that scene because we went from a boy, who had just lost his mother, to a man, who is dancing on an unknown planet.

Though the movie never explores Peter’s childhood, we do learn that the leader of the Ravegers, Yondu (Michael Rooker), was his sort of father figure, who wouldn’t let his men eat him.. And at the very end of the movie we also find out something vague about Peter’s biological father, which is hopefully the focus of the next movie, but the only reference to Peter’s past throughout Guardians of the Galaxy is that soundtrack. What I’m trying to say here is that while Peter’s character is fun, entertaining and charismatic throughout, there’s some mystery to him which is gradually hinted here and there but luckily never fully explored in this movie.

Some of the other characters in Guardians of the Galaxy aren’t as multi-layered, which is fine by me because otherwise it would throw the whole movie out of balance. Gamora (Zoe Saldana) and Drax the Destroyer (Dave Bautista) were the two of the bunch who didn’t have any sort of mystery around them. A skilled assassin Gamora is an adopted child of Thanos but she betrays him because he killed her parents, and Drax is out to kill Ronan (Lee Pace) because he killed his wife and child. While Gamora and Drax are pretty understandable as characters, Rocket (Bradley Cooper) and Groot (Vin Diesel) are a whole new level of interesting for me!

Rocket and Groot represent a team, in a way they are complete opposites to each other but somehow they work. Rocket is this badass, scientifically engineered raccoon, who knows his way around guns and technology. Groot is a gentle tree-like-creature, who doesn’t say anything else except “I am Groot” and somehow he still managed to make me cry in the end. How Rocket was created is subtly hinted here and there, and it’s especially heartbreaking when Rocket states that “he didn’t asked to be created” but we don’t find out a lot about the process which, I bet, was horrific. Groot’s existence is a mystery but as a character he is interesting on his own because while being completely innocent, he is also highly dangerous at the same time.

Though, the characters themselves are interesting enough, Rocket and Groot standout even more due to the men behind them – Bradley Cooper and Vin Diesel. Both of their voice work deserves a mention because, for instance, Diesel only had one sentence throughout the movie but he kept saying it, in different languages as well by the way, and saying it until it sounded different every time. Now in regards to Cooper, I remember people being unsure of him as a voice actor for this role, but I think he proved all of them, who doubted him, wrong. He didn’t sound like Cooper, he sounded like Rocket and I think when an actor lends his voice to a character and doesn’t really use his own voice, that voice belongs solely to the character. So by not recognizing Cooper in Rocket’s voice was actually what made that character brilliant.

That being said, the most amazing casting move was without a doubt Chris Pratt, a guy who Gunn wasn’t sure about! Yes, you heard it, Gunn was encouraged by the casting assistant to give Pratt a chance and after he auditioned, Gunn was so convinced that he didn’t even care if Pratt got into shape for the role or not. So a shout out to that casting assistant, job well done, I’ll tell you that because Pratt was born to play this role. Though born to play Star Lord, Pratt did have to train hard for the role as well, losing 27 kg in six months through exercise and by not drinking beer – now, that’s commitment! Peter is charismatic all the way, so there’s definitely a lot of Pratt in that character and it works because while he does things that are morally questionable, it never comes off as arrogant or rude, nor even annoying. Only a handful of actors could have that sort of screen presence, Tom Hiddleston as Loki being one of them, and though Peter Quill is not categorized as a villain, on one or two occasions, one could call him a jerk.. an adorable jerk.

While all these characters have enough to create a fantastic cinematic experience, the plot of Guardians of the Galaxy doesn’t fall far behind in terms of being well structured, interesting, emotional and the right amount of entertaining. Some might argue with this, I don’t mind, for me, having seen it twice in the cinema, there wasn’t much to fault on in terms of the story. Though at the beginning, during the first screening, I did question the scene where Peter saves Gamora in space but considering his genetic background, explained in the end of the movie, even that seems logical. Speaking of scenes, it’s hard to pick just one favorite at this point, therefore I’m going to skip this discussion in this review and maybe dedicate a separate post for that. I do want to point out the fact that one of many favorites was actually Yondu’s scene during the final battle because it finally revealed how amazing his arrow actually is. (And no, that isn’t a sexual reference.)

In the beginning I mentioned that I wouldn’t know what to fault in Guardians of the Galaxy but I was not being 100% honest. I do know something that might have needed a little bit more effort and context: the villain, Ronan and his little helper, Nebula (Karen Gillian). Not quite perfect, nor quite boring either, there was something off with these two in terms of characters and I can’t just put my finger on it. But at the end of the day, it doesn’t even matter because the rest of the movie is way more interesting than the dynamic between these two villains. Shame though, Lee Pace is a wonderful actor and it almost seemed like a waste to cover his face with all that paint, but that’s just picking on little details. Eventually though, Ronan did shine a little, but it was mostly because he confronted Peter Quill and his epic dance moves in a wonderful little scene!

Truthfully, Guardians of the Galaxy has many amazing scenes and moments, there’s one around every corner and with an actor like Chris Pratt taking the lead, you’d be crazy not to like this movie. I’ve heard about couple of these crazy people and it’s hard to understand their point of view because I can’t seem to get my head around the fact how somebody could dislike Guardians of the Galaxy. It’s fun, it’s funny, it has adventure, it has great characters and good characters, it has an amazing soundtrack, it isn’t too light but it isn’t too dark either – fine, somebody doesn’t love it but surely they have to at least like it. Finally, with the summer almost over, and having seen pretty much all the blockbusters this year (benefits of living near a cinema for once in my life), I’m making a final statement: Guardians of the Galaxy was THE movie of summer 2014!