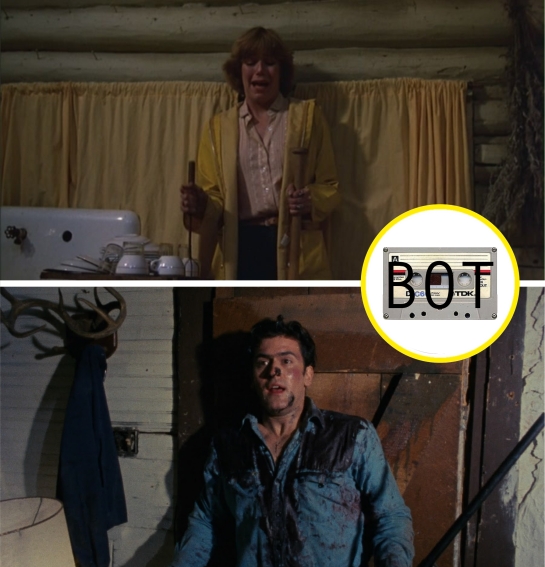 There’s no need to be afraid, though it seems that I have gone all horror on this blog, I won’t! But I just happened to watch Friday the 13th and The Evil Dead, as if it’s such a casual thing for me to watch horror movies now, and I thought they fitted perfectly into the BOT feature. Since I already reviewed Psycho, Friday the 13th and The Evil Dead are a nice follow up as they both represent the later era of horror which is more bloody, less over-scream and a little bit more why would you do that situation filled.

I didn’t plan a 2in1 BOT feature post but as I have piled up so many posts these past few weeks, I can’t escape the fear of actually being buried under them as I try to write them. Getting two of them out of my hands at once seems like a perfect way to lightened the load but I’m definitely not going to compare them to each other. There are things to compare, obviously, but I don’t feel very comfortable with putting them into a rating-match-off – besides, I gave them an equal rating on Letterboxd so in my eyes, Friday the 13th and The Evil Dead are equals. 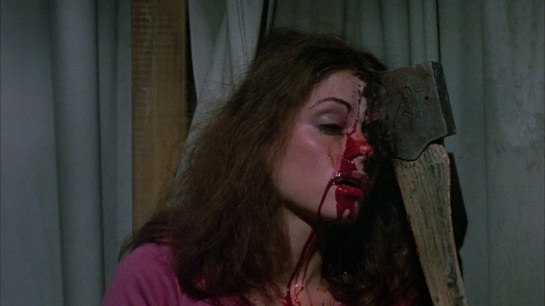 “Cause when 5 of your friends are nowhere to be found, the phone doesn’t work, car doesn’t start and the generator is out of order – it’s time to make some coffee!”

This was in the end of Friday the 13th where I paused the movie just so I could write down my thought, yes, I have a problem with these horror movie situations where people are stupid. I think I’ll never get rid of this problem but I think I’d be able to learn to laugh at this instead of being disappointed. Because what Friday the 13th managed to do after that coffee-making was quite thrilling. I still thought the leading lady on the picture above was a bit naive even while fighting with the bad guy but I was enjoying it. When it comes to the scary-factor, I wasn’t aware of it even during those moments where you have the intense music to emphasis the scary. The blood and gore on the other hand was delightful – yes, I’m saying that I liked how Kevin Bacon got stabbed in the throat and the blood started gushing.

What I also liked was the way the movie was planned out. Friday the 13th had a story and a back-story, it really worked in terms of the plot and although I haven’t seen the following movies, I think it marks a good beginning for a series. The thing that threw me off a bit was the scene on the lake in the very end, the only one with Jason, because up until then it looked realistically horrible and in that second it was made supernaturally horrible. Not that I mind supernatural creatures, I just think the idea of actual people killing is much more scary at times. Then again, that kind of ending, open to possibilities, is better than finishing everything off and not giving any room for sequels.

The biggest problem with Friday the 13th for me is the fact that I don’t know what to write about it. This will be a theme for this entire post actually and I really can’t figure out why. I’m guessing it’s the fact that I’ve just jumped head first into a new genre and I don’t have any proper knowledge. If I look at Friday the 13th just as it is, a movie about a group of friends in a camp getting killed one by one, it isn’t strong but then again, it is a horror-classic and an inspiration to movies that I have yet to watch.

While I didn’t really have any moments of utter stupidity regarding The Evil Dead leading man, he still bothered me in terms of not being able to kill efficiently the thing that his girlfriend turned into. Then I thought, no, I should not think of logic and just enjoy the show and I did. The Evil Dead was most likely an inspiration to Cabin Fever because the concept was so-so similar. The difference maybe was in the fact that in The Evil Dead the forest was alive and the people kind of turned into these zombie-looking-things, though they never seemed to actually die. What I did like was the fact that it looked pretty well-made for an 80’s movie in terms of the gore and evil things. In a way, although I said I won’t compare the two, I liked The Evil Dead more in the terms of the make-up but then again, Friday the 13th didn’t have the option to create dead creatures.

Yet again with this movie I have not much to discuss, it was mediocre and the plot didn’t really offer any twists in my opinion. Though my knowledge is minimal I did read that The Evil Dead (1981) is not the best out of the franchise, where as far as my investigative skills go, the newest aka the remake is a lot better. Hopefully the 2013 remake will have a more solid story because honestly, I can’t think of a decent plot besides friends go to the cabin, turn into evil-dead-creatures – and that just sounds mediocre. That being said, it was the 80’s and the emphasis was probably more on the visual than the actual story or character development. (PS: There of course is a plot solution but I don’t want to spoil it, then again, I had almost forgot about it so I guess it wasn’t very memorable.)

With The Evil Dead I didn’t connect with the characters on any level, the leading man didn’t offer me any possibilities to emotionally connect and that made me distant from the story. Not that I want to be very invested in the characters in a horror movie knowing they will most likely die but I still want to feel something. The scary factor wasn’t as high as I would have wanted it to be either but I’m crediting it to the style of the era not the actual movie. I’m guessing nowadays it takes a lot more to scare people and even me, though I always figured I was easily scared. Still, I take it the fact that I started with the classics gives ma a great insight to the following horror movies, besides both The Evil Dead and Friday the 13th have their own franchises, so more to see among themselves as well.

Now as I have numerous horror recommendations to last me … forever, I will continue with horror but on a less obvious manner. I had a very horror filled week but I also have other movies to see, other classics to devour and lots of TV-shows to absorb. Until the next horror-week!