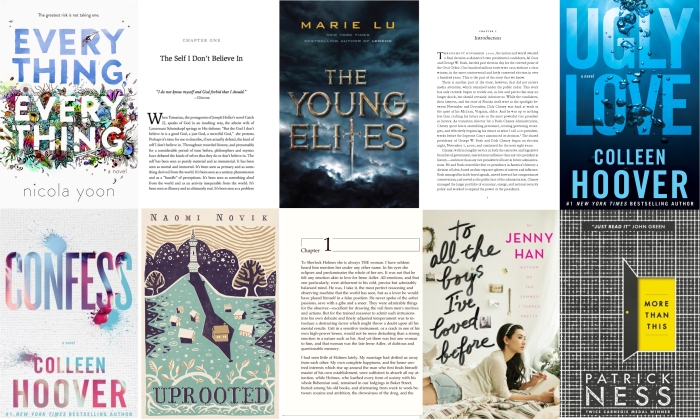 In the beginning of December I finished my reading challenge – I had read 50 books and there was still a month left. So I read more, surpassing my challenge with four books, and proving to myself that if I set my mind to it, I could spend hours and hours reading books! Here are the books I spent many hours with, because a few of them are what one would call – big books!

A young adult contemporary read that pleasantly surprised me in the end with a plot twist that I didn’t see coming, though it was implied throughout the book. The story follows Maddy, a girl who is allergic to everything, and her new neighbor, Olly, who is allergic to nothing. With a romance element, and driven by self-discovery, Everything, Everything was a quick Friday evening read that I thought to be lovely and sweet.

The Young Elites is the first book of a new dystopian trilogy by Marie Lu and I disliked it for many reasons. Firstly, I didn’t appreciate its similarities with Throne of Glass, and secondly, I strongly disliked the leading character, to a point where I actually hated her! And having such strong and negative feelings towards the protagonist only means one thing – the probability of me picking up the sequel is extremely low to non-existent.

Do not judge me, okay?, because the next two books were solely picked out for their ability to be consumed quickly. Colleen Hoover is a name I was not familiar before, and now, I have read two of her latest books and liked them both for various reasons. Ugly Love was likable because it delivered the romantic clichés I was expecting, and this new adult romance delivered oh so many of them. It was fun, funny and a little bit emotional as well as enjoyably written.

The second new adult romance I picked up in December was also filled with clichés and I didn’t mind them. Though Confess was definitely less exciting, and a little bit weak in terms of reasoning, the book was picked as the Goodreads Romance winner of 2015, so maybe I’m wrong. Anyway, despite the logic behind some of the character actions and reasoning, the art work that accompanied the book, together with the tearful opening and ending, Confess was still a pleasant read.

A stand alone fantasy book that reminded me of so many fairy tales and myths, and yet felt completely different and refreshing. Naomi Novik delivers a world filled with magic and likable characters, a villain that feels all powerful and scary, and writes effortlessly. My only concern would be the pacing of the novel, that felt a bit dragging for my taste, but other than that, it was a fantastic read and there’s nothing more amazing than reading magical words that are clearly inspired by your own language (Estonian in my case).

TO ALL THE BOYS I’VE LOVED BEFORE

This was my second, and last reread of 2015 and I picked it up because I needed some lighthearted literature to warm me up. A contemporary YA novel about first loves, other loves, family and sisterhood, is the perfect little book to snuggle up with. It is funny, it is emotional and the writing style easy and comfortable. Though I planned not to pick up its sequel, I’m not literally itching to read it again as well because I’m too invested in the relationship that develops in this novel.

Out of all the books, I decided to finish 2015 with Patrick Ness’ More Than This – a book that raises so many questions from the beginning, and never really answers them without raising a few more. It starts with a boy drowning, and ends with an important lesson. It’s written beautifully, and though it frustrated me not to know what was going on, the frustration somehow feels like a part of the novel itself. I would want to say more than this, but then I would have to say too much.