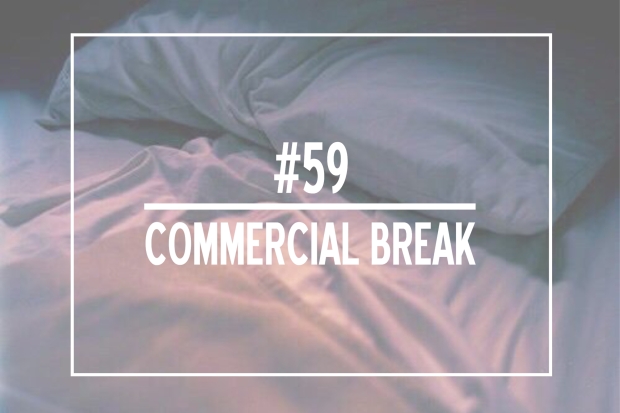 So… I missed last week’s Commercial Break because I had things to do, and movies to see! That’s right, I finally managed to drag myself to the cinema, and watched two movies in one day! I shall thank the Black Nights Film Festival for finally breaking the two month dry spell in my movie-going, but mostly, I have myself to thank for, for being able to drag myself out of the apartment for once! Thank you, me, for looking out for me!

One more week, and I’ll have a week off for vacation. It sounds just as great as it feels, to have a week to my own, and just, relax. I’m also getting, finally, my bookshelf delivered on the 23rd, so I’ll be spending following Thursday assembling it and organizing my shelves. Hopefully all my books will fit, though I’ve thought about giving some of them away due to my lack of interest towards them. But we’ll see. I’m just so excited to finally have a proper home for my ever growing book collection.

Last week me and my friends went to listen to Daniel Sloss’s standup. We did the same last year, and our expectations were high. Some of us, due to the nature of his standup, didn’t enjoy it as much, but I thought it was brilliant. Sure, I preferred last year’s to this year’s, but overall, the evening was great! I got scolded for drinking wine in the theater not the bar, sat really close to the stage because I like to think of myself as a big fan, and received hugs from Kai Humphries and Daniel Sloss after the show – another perfect Monday among the average ones.

Next Monday, I will most likely get my biggest tattoo as of now, and apparently, in a very painful place… so I’m looking forward for that! I’m also looking forward for my mom’s shock when she sees it for the first time because I don’t think she has realized the size, the placement, and the imagery of it yet. By the way, she dislikes all my tattoos to an extent. Like, she almost likes my first one, is content with my second one, doesn’t see the point of the third, still hasn’t accepted the forth, and will now most likely shed a tear upon seeing the fifth. Oh, mom…

Like I said, I finally went to the cinema, twice in one day, all by myself, and saw two very emotional movies. The first one was a German movie 4 Kings, and it was amazing. Oh my god, it was perfect. I will definitely write a review about it, so I won’t say more, but man, it was one of those movies that you go to see, without really knowing anything about it, and the movie just gets under your skin, and stays with you for a long time.

The second movie I saw was Manchester By the Sea, and oh man, like, oh man. It was so heavy, emotional, raw, and the outcome, like, I was infuriated by the outcome. There will be a review, so I don’t want to get into it, but I’ll say this: the performance by Casey Affleck, just, oh fucking wow! And if I had the choice between Ben and Casey, I’ll choose Casey! No doubt, I’ll pick him, and I’ll give him all the awards!

On Tuesday, after work, we’re going to see Doctor Strange for multiple reasons. First, I think I’ve missed only the first Marvel movies at the cinema, and after I moved to the capital, I haven’t missed any. Secondly, I keep hearing great things, and I don’t want to miss it. The same goes for Arrival, which I really really want to see as well, so I think I’m going to do that this week too.

Now, I’m a little behind with shows now. I think I’m all caught up with Lucifer, and that’s about it. No, Eyewitness is also something I’m on track with, but Westworld, Frequency and the rest, all behind with more than an episode. So yes, I’m walking on a dangerous path of spoilers right about now, and I really, really don’t want to.

If you guys might have noticed, I mentioned my vacation week coming up, and behold, the coincidence of it being on the same week when Gilmore Girls Four Seasons comes out!? Like, I could not have planned it better. And while I would love to party hard on a weekend, I can’t, because of my tattoo, and I much rather spend it at home watching Gilmore Girls anyway. Man, I’m old.. eh.

Guys, I’m back! Like, the last two months were like average reading months with so-so reads, and just a lot of YA fiction to get me through a slump, but I feel like after reading Six of Crows I’m back! And clearly I should stick with fantasy, because after Six of Crows, I have now picked up Empire of Storms, sailed through the first 100 pages, and contemplating on rereading The Court of Mist and Fury because it was so good! Also, I’m 1 book away from finishing my reading challenge this year.. in the middle of November. Man, this feels amazing!

Now, at the end of November, again during my vacation, The Weekend will release his new album “Starboy” AND a week after that, Childish Gambino will release his third studio album “Awaken, My Love”. *gasps for air* My life will be complete.

Girl Mans Up is a book, Maria from Big City Bookworm reviews it

Arrival discussed by Dan the Man