It’s November?!? Oh how the time flies. Especially when one takes a somewhat unexpected sort of a (but not really) break from blogging. But breaks are important. Breaks allow us to recharge, regroup and re-energise our lives. So I’m hoping to be a bit more lively in November, even though I have a super busy month ahead. But I had a feeling I needed to bring back Commercial Break today!

As you can see, I’ve split this week’s Commercial Break into two parts. Partly because I feel guilty for not writing these posts for so long. Mostly because I don’t want to stuff everything into one huge ass post. To make things lighter and easier to digest, the first part (this one here) will focus on life updates, and movie recaps. Second part will be mostly about TV shows, books and music. And links will be included in both!

So, life has been an up and down roller coaster ever since I came back from my holiday in Greece. Because right after, I made a decision and applied for a job. And well, some of you probably already know this but I got it! And since October I’ve been working there from Monday to Friday, 9 to 5, like a proper office employee I am! It’s wonderful, new, a bit scary, but still very exciting and thrilling.

Needless to say, I will be on trial period for four months, so fingers crossed! But even as I say this, I’m more or less trying to focus on the now. Be in the moment, do the best that I can and a bit more, and just enjoy myself. Meantime I’ll keep the specific details to myself, and when the time feels right, I’ll share more about it.

In other life news, I got my eye surgery appointment scheduled for March. But, since my second consultation, I’ve been feeling less thrilled about it. It’s the kind of surgery one might not want to Google though… because, I did and now I’m slightly worried. The wanted effect of my eyes looking less pushed forward is not going to be achieved easily. There are huge risks, double vision mainly and it would have to be done in steps. So I’m sitting on this date and contemplating if slight changes to my eyes, which won’t fix the main issue, would make me feel better.

There are days I’m leaning towards the operation, there are days where I don’t want to risk not looking like myself. Even though I don’t feel like my face has been my face for two years now. It’ just a bit hard to think about it all. Especially since it feels a little pointless compared to health struggles some have to go through. But everyone’s problems are subjective, and I’m having a hard time with mine at the moment.

Back to happier topics again! I’m going to Scotland for an entire week this month! This will be my first visit to Scotland, and it would probably be not the last. My best friend, from since I can remember, moved there this summer, and I’m going to visit her at least once a year. I decided this just now. Luckily we have direct flights from Tallinn to Edinburgh since this fall, so it’s super easy for me to go there. Oh, and you bet I’m going to visit at least two Harry Potter locations!

So, my last Commercial Break was in July 23rd… since then I’ve seen 38 movies. 10 of them were rewatches. I’d say, pretty good and not shabby at all! Some of the reviews are already up (underlined), most of the reviews planned are still in drafts. And some I have a hard time reviewing because of personal reasons – it’s a colourful mix of films here. So get comfortable, grab some coffee, because here are my quick, mostly one sentence recaps of all of them.

Jumanji: Welcome to the Jungle was a rewatch of mine, and I still like this film. It stays true to its original, it adds its own twist and it’s just pure fun. Isle of Dogs was good, but I don’t remember a lot about it. Definitely not my favourite Wes Anderson movie but still, hats off for doing stop motion! The Guest was thrilling and wonderful. The Killing of a Sacred Deer was confusing, too poetic and a little too artsy at times, but I loved the cinematography. 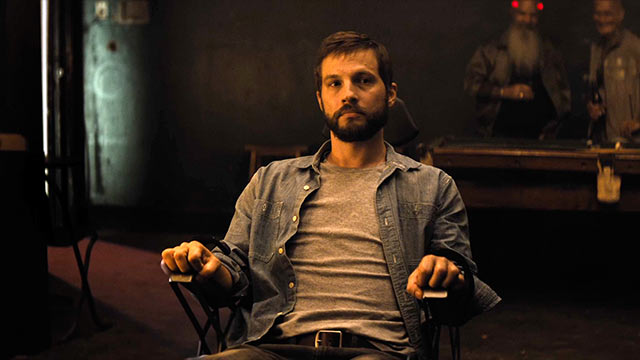 Like Father was another pointless Netflix movie and this will be the general theme throughout this recap. Popstar: Never Stop Never Stopping was a mockumentary I didn’t really care for, even though I love Andy Samberg. Billy Elliot, a rewatch I felt like watching, and of course I liked it a lot. Pride & Prejudice, a movie I rewatch once a year every year I think – I just love this film! I Am Not an Easy Man is a French film where roles of men and women have been switched. Funny, quirky and even though it doesn’t go too deep into its heavy theme, it’s a nice commentary on society.

Upgrade, a low budget sci-fi film I absolutely loved! To All the Boys I’ve Loved Before – a movie that I needed to be amazing – was not good and I still have trouble expressing my thoughts about it. Catch and Release, Maid in Manhattan and The Truman Show were all rewatch movies because I needed something emotional, romantic, and great, respectively. Taxi Driver was my Blindspot movie and I pretty much loved it. Zootopia was a rewatch because I needed the laughs, and I got them. BlacKkKlansman should have been funnier and should have had a bigger impact.

September started with Netflix’s Sierra Burges Is a Loser which was awful in all the ways possible. True Lies was a much needed rewatch because why not. Mandy was confusingly beautiful. Casablanca was another Blindspot viewing, and I didn’t care for it that much. Then I watched last year’s Academy Award winner Icarus, which is a documentary about illegal doping. It was scary and unbelievable, as it showed the dark side of sports. Then I rewatched Set It Up and Alex Strangelove for our Across the Universe Podcast episode. Next up was Hush, which I watched for one of my Thursday Movie Picks post, and it was quite okay. And I finished September off with another documentary, Gaga: Five Foot Two, which gave a very nice insight into Lady Gaga. Also the poster is wonderful, I’ve followed the artist on Instagram for a while now. Next up was another Thursday Movie Picks post viewing, which was Don’t Breathe. I ended up really liking that movie for its tense plot and twists. Then I watched Sam Rockwell’s movie Blue Iguana, which was pretty bad. I did like one of the scenes in the beginning, but that was about it – Sam needs better movies! Then I went to fangirl over Tom Hardy and ended up being pleasantly surprised by Venom. I mean, the movie is flawed, but it isn’t as bad as one would think. A Star is Born was amazing though, not perfect, but amazing. Sorry to Bother You was great and I really want to see it again, so I’ll be able to review it! Boogie Nights was a bitter sweet Blindspot pick for me, but I still enjoyed it a lot.

Then I watched Let the Right One In and Let Me In back to back and oh man, did the original outdo the remake! I honestly didn’t even see the point in the remake, which was just a fancier translation. Saw a pre-screening of Bohemian Rhapsody, and despite the shit behind the screen, ended up loving the way Freddie Mercury’s life was portrayed. It’s also a movie I’ve struggled to review, because I know I will get hate for liking it. Then I saw the original Halloween and the new Halloween, both of which were okay. I ended up liking the new one a bit more, probably because the soundtrack worked so well at the cinema! Finally, I watched Paddington for the first time and it was adorable! I did start the sequel, but haven’t finished it yet, but I will! That bear is the cutest!

Cinematic Corner is unstoppable, and has been posting so much! Here’s her Venom review

I’ve missed Two Dollar Cinema‘s Yay’s and Boo’s, so this Searching review was a much needed dose of yayboos

Oh So Geeky is writing amazing content every week, her Actors Who Should’ve Won Emmys is a bitter sweet list that stood out

So, there you have it. A huge recap of all the movies I saw, and thank god for Letterboxd because I wouldn’t have been able to remember them without it. Which is not the case for TV shows, and I’m in for a lot of trouble in Part 2. Because, I know I’ve seen quite a few shows since July… but I only remember some of them. So stay tuned for Part 2 of Where the F*ck I Have Been, which should be up tomorrow!