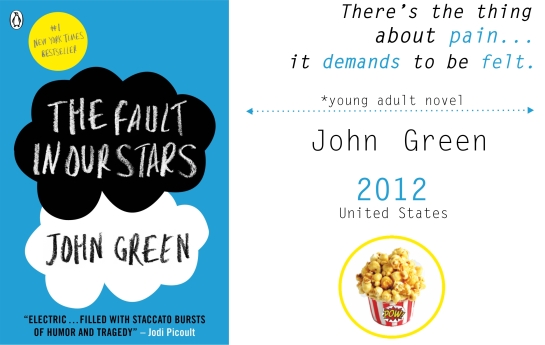 With my vast knowledge of John Green through his YouTube channel VlogBrothers, which he runs together with his brother, I was 100% certain I was going to like The Fault in Our Stars. My assumptions were not misleading – the book was exactly what it promised to be – funny, sad, hilarious and a-cry-fest! I’m not sure about you, but I consider the book to be amazing when it manages to make you cry through the tears caused by the tragedy of the story.

There’s definitely a challenge ahead with this post as I try to sound as professional as John Green while describing his recent and most successful book so far. One just simply can’t go ahead and say the book is good, The Fault in Our Stars needs to be presented with certain integrity because that’s what it gives to its readers and especially the characters inside the dramatic and yet witty plot. So bare with me as I try to pull out every possible literary writing skill my poor brain has to offer and I’m pretty sure it’s spoiler free – yes, pretty sure I left out the big-big-important things.

“Diagnosed with Stage IV thyroid cancer at 13, Hazel was prepared to die until, at 14, a medical miracle shrunk the tumors in her lungs… for now.

Two years post-miracle, sixteen-year-old Hazel is post-everything else, too; post-high school, post-friends and post-normalcy. And even though she could live for a long time (whatever that means), Hazel lives tethered to an oxygen tank, the tumors tenuously kept at bay with a constant chemical assault.

Enter Augustus Waters. A match made at cancer kid support group, Augustus is gorgeous, in remission, and shockingly to her, interested in Hazel. Being with Augustus is both an unexpected destination and a long-needed journey, pushing Hazel to re-examine how sickness and health, life and death, will define her and the legacy that everyone leaves behind.” – GoodReads

Alright, the plot sounds a bit too teenage-love and indeed, it does feature a love story but no such story has been told with such integrity. I mentioned this already but I want to emphasis this because that is what makes John Green a good author. He approaches teenagers, Hazel and Augustus, with such maturity that at times, they don’t feel like kids at all. This of course makes sense because both the lead characters know what its like to look death in its eyes – cancer made them grow up faster than their peers. Therefore, even though the synopsis feels like take on teen-love, the harsh truth is the fact that those characters are far beyond their years.

Since cancer and love are the themes of The Fault in Our Stars, the book feels just like that – tragic and yet happy. It’s the clash of two opposites, the fear of death and the joy of life and I feel like Green manages to make each of those sides feel realistic. I don’t know much about love, a future with cats sees more promising than actually finding my better half, but I know about cancer. When something like that happens to somebody in your family.. there are no words. It’s something that stays with you forever and the fear never goes away. Would I have felt as connected to the story without my own personal connection, yes, but maybe not on such a deep level.

There’s a side story in The Fault in Our Stars that feels a little disconnected at first. Hazel has a favorite book, she has read this book numerous times and has even taken the liberty to write to the author due to the questions that the story in the book never answers. Hazel wants to know those answers, she wants to know what happens to the characters in her favorite book. At first, I didn’t really get why Hazel was so determined to meet with the author, why the author was written to be so rude and ugly and why the author felt like the key character. After having the time to think about it, weeks after I finishing the book, I think I’m not meant to get it. I understand the connection Hazel had with the book, it’s narrative was written by a girl with cancer, but I think in a way, the need and determination is not something that belongs to the reader but for Hazel. While reading, one would feel the things Hazel feels, there’s no doubt about that, but I guess understanding her completely, since she is living with cancer, is only for those who understand the disease.

Like I already said, there are two main characters, Hazel and Augustus – one with cancer, the other a cancer survivor. They are teenagers and yet, they are written as if they are smarter than grown-ups, wittier than one would expect and more logical and passionate than any other teenager I’ve read on paper lately. That makes them special and having characters, who you can’t really pinpoint into a specific character type, is refreshing.

Supporting characters in the story include Hazel’s mother and father, Isaac, a boy who brings Augustus to the group meeting and the author of Hazel’s favorite book. Of course there are other characters but I guess these offer main support. Hazel’s mother is caring and always looking after her, the father is emotional (yet a again refreshing character switch between the parents). While Isaac is the beginning for Hazel and Augustus, for him the story delivers bad news – he will loose his second eye to cancer shortly after the story begins. He is still an amazing character though, refreshingly amazing and that makes him a great support to the main duo. The author I keep mentioning is mean and an ugly character but I guess not all can be as strong as the teenagers in The Fault in Our Stars.

I made a decision to read the book just after I heard the news about the movie because I needed to know before I saw the movie. I’m not sure how the movie will turn up but I’m pretty sure, if they stay true to the story, it will be filled with heart and tears and laughter. Besides, the book has some great moments for each character, some very cinematically imaginative scenes that would work well on the big screen. Considering the tear factor, I would most likely have to read The Fault in Our Stars 100 times before I can go through the movie without tears and that would be due to the lack of tears in my where-the-tears-come-from-system. But don’t be frightened, because while it is sad, one can’t help to laugh with it as well.. and that makes it a great book.

And though I tried to sound smart and rattled my brain as much as I could, I think I still didn’t do justice for The Fault in Our Stars that is yet again number one in the New York Times Best Sellers list (under Young Adult)! Come to think of it, I should have mentioned it in the beginning because that pretty much says it all – number 1 people, number 1!