Though I set myself a pretty big goal for the shortest month of the year, I watched all three Before movies. At first I thought I’d talk about them as a whole, as a packaged deal, but after finishing the second movie, I knew I had to view them separately. Here are my thoughts on Before Sunrise, Before Sunset and Before Midnight. The first movie in the series was the weakest for me in the trilogy. For some reason, I found it hard to connect with the characters, even though there was so much to grab onto. Because Before Sunrise was literally a walking script, happening right in front of you, in real-time. In terms of movie making, that was brilliant and beautiful! But it also expects you to immediately like the characters. The characters are meeting each other, while the viewer meets them, and we are supposed to fall in love. I think many of us did, and I understand, I just needed more time.

What makes Before Sunrise one of a kind is its simplicity and complexity. I know, contradicting, but hear me out. The idea of the movie is the simplest, two strangers meet on a train, they start a conversation, before sunrise, they’re ways go apart. The complexity is the way the conversation is carried, the topics, the themes, the discussion of life’s most complex ideals, ideas and theories. It’s almost as if they, two young people, are trying to fit the whole world into this short period of time. If I had watched Before Sunrise in my teens, I would have probably been swept away by its romanticised idea of meeting someone  that feels like your destiny. 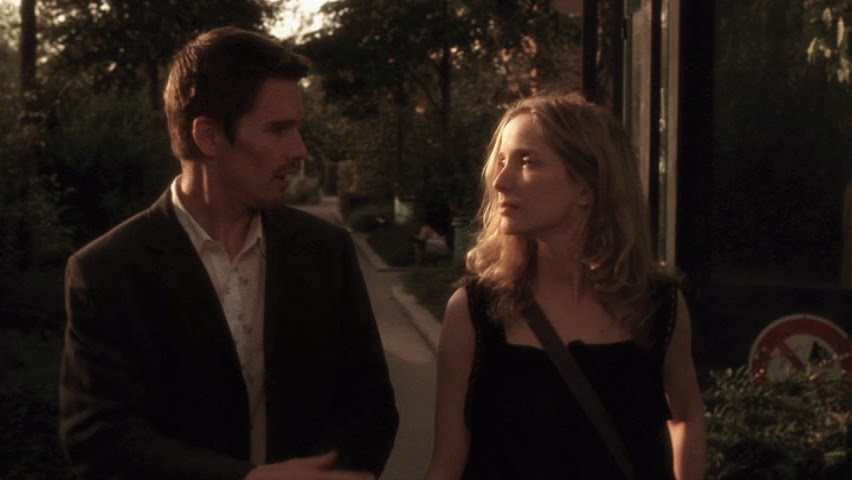 Second instalment, Before Sunset, was probably my favourite and it’s hard to explain why exactly. Maybe it was the fact that the characters are now, in 2004, closer to my age than they were during Before Sunrise. Their ideals, ideas and thoughts have settled, they have settled, and it’s a bitter sweet realisation. We have our character meet in the very beginning, picking up their conversation where they left it. And it’s even more beautiful.

What makes Before Sunset for me the best, is the way the conversation reveals plot twists. Unlike with the first movie, we now have questions about the characters, we have missed 10 years of their lives, and we need to know what has happened to them. We suddenly care much more because they are familiar to us, and yet, still strangers. But the moment I realised the characters had become more to me than characters, was when she sang that waltz. That was the moment when I cried because I cared about them so much.

I think that’s also the reason the second movie is my favourite. It hit me hard in the emotions! But I know it couldn’t have done it without its first movie. There is a very strong symbiotic relationship between the films, and it’s hard to separate them from each other. It’s because all three rely strongly on the most powerful human emotion, not love, but the hope!

PS: That scene in the car, where she almost touches his hair to comfort him, but pulls away right before he notices – that scene broke me!

The choice of images in this post is purposeful, and it breaks my heart. The third movie reveals the years that have gone by have brought our main characters together. But bliss is probably not the word to describe their life. Yes, they still love each other, there is still passion, but there are is also resentment and miscommunication. The last is surprising, as the third movie relies again heavily on conversation. But this time, it’s the things that are left unsaid that are more meaningful, the non-answer to a question, the evasion of the question. And yet, there is always hope, hope that love and passion will overcome the obstacles of life. And it’s the hope I’m clinging on.

As a thought before the last, I do want to point out the symbolism in these movies is so amazing. The almost touches, the looks, the topics, the fact that distance is always present in their lives. At first it’s the distance of their culture, American vs French, then the distance of their desire, which can’t be met because both are taken. Lastly, the distance of their lives from the life they both wanted, but somehow lost. In the end, Before Trilogy is everything you could imagine: happy, hopeful, lovely, sad, truthful, realistic and magical.

In conclusion, the Before Trilogy ended up being very powerful and I can’t wait to revisit it. It’s heart breaking, but it’s also very meaningful and it carries us through the lives of two people, who can talk through anything. Or can they? Can their differences, and distance be looked past? Can they keep lying to each other, can their passion and love survive their rational selves? Questions, so many fucking questions, and none have answers. And that’s life. A big ass question we never have an answer to. Sometimes things work out, sometimes they don’t. But never can we ask a stranger on the train if she would still be the one almost 20 years later. Because we wouldn’t know the answer. And frankly, we wouldn’t know it 20 years later either.