Against the Crowd Blogathon by Dell on Movies is back, baby!! I’ve been participating in this fun blogathon since 2015 (unfortunately I missed 2018 completely) and I’m glad to do so again. I almost missed the deadline today but luckily I was in the right place at the right time. So if you are quick you can still make it too!

If you’re not familiar with the Against the Crowd Blogathon, here’s a quick rundown. The idea is to pick one movie that everyone loves but you dislike, and vice versa. You pick based on Rotten Tomatoes scores. The movie you go against has to have a fresh rating of 75% or more and the movie you defend has to have a rotten rating of 35% or less. You can find more information on Dell on Movies blogathon announcement post HERE. If you decide to participate don’t forget to share your post on social media with the hashtag #AgainstTheCrowd2021.

I’ve traditionally picked romance movies to defend so this year won’t be any different. It’s now my thing, a theme within a theme because you guys know how I love those. Though I must admit finding romcoms to defend is coming harder and harder. I’ve already defended PS: I Love You, A Walk to Remember, Because I Said So, Love Rosie and Catch and Release. It’s not that I don’t have any rotten romance movies to defend, it’s the lower than 35% rating that makes it harder. But I manager barely this time… I might start cheating soon though.

For those who listened to the Across the Universe Podcast episode on Mank this pick is no surprise. I did not like Mank one bit.. As you can see the audience agreed with me more than the critics. The movie is dull and for me, somebody who isn’t fond of black and white movies, this didn’t capture my attention. I did say that it managed to look old which is a technical wonder but the story, the plot, the characters, the acting… meh. Very overrated in my opinion and the kind of movie that swept awards but will be forgotten in a few years time.

As with all the romance movies I’ve defended over the years I’m gonna say it again – it’s not as bad! Honestly! And again it’s proven by the audience score that is 250 000+ votes on it being a lot better than 178 critics thought. Like what the hell. Sure it’s not the best thing out there but it’s not terrible. It deals with grief and it has a quirky female lead played by the always wonderful Kirsten Dunst. Plus it has this roadtrip scrapbook that made me wanna scrapbook every time I watched this movie. Unfortunately I have neither the skills nor time for that kind of awesomeness. Anyway, going against the crowd and saying that Elizabethtown is not rotten the critics are! 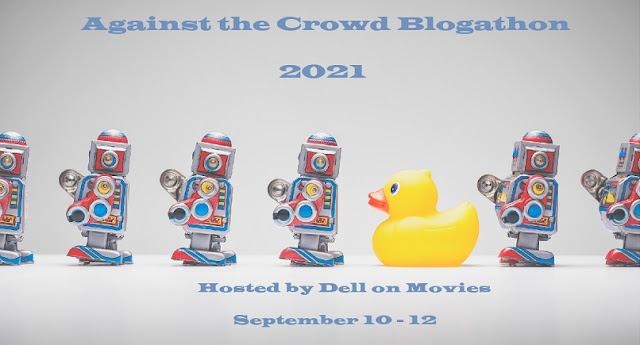 Against the Crowd Blogathon 19′