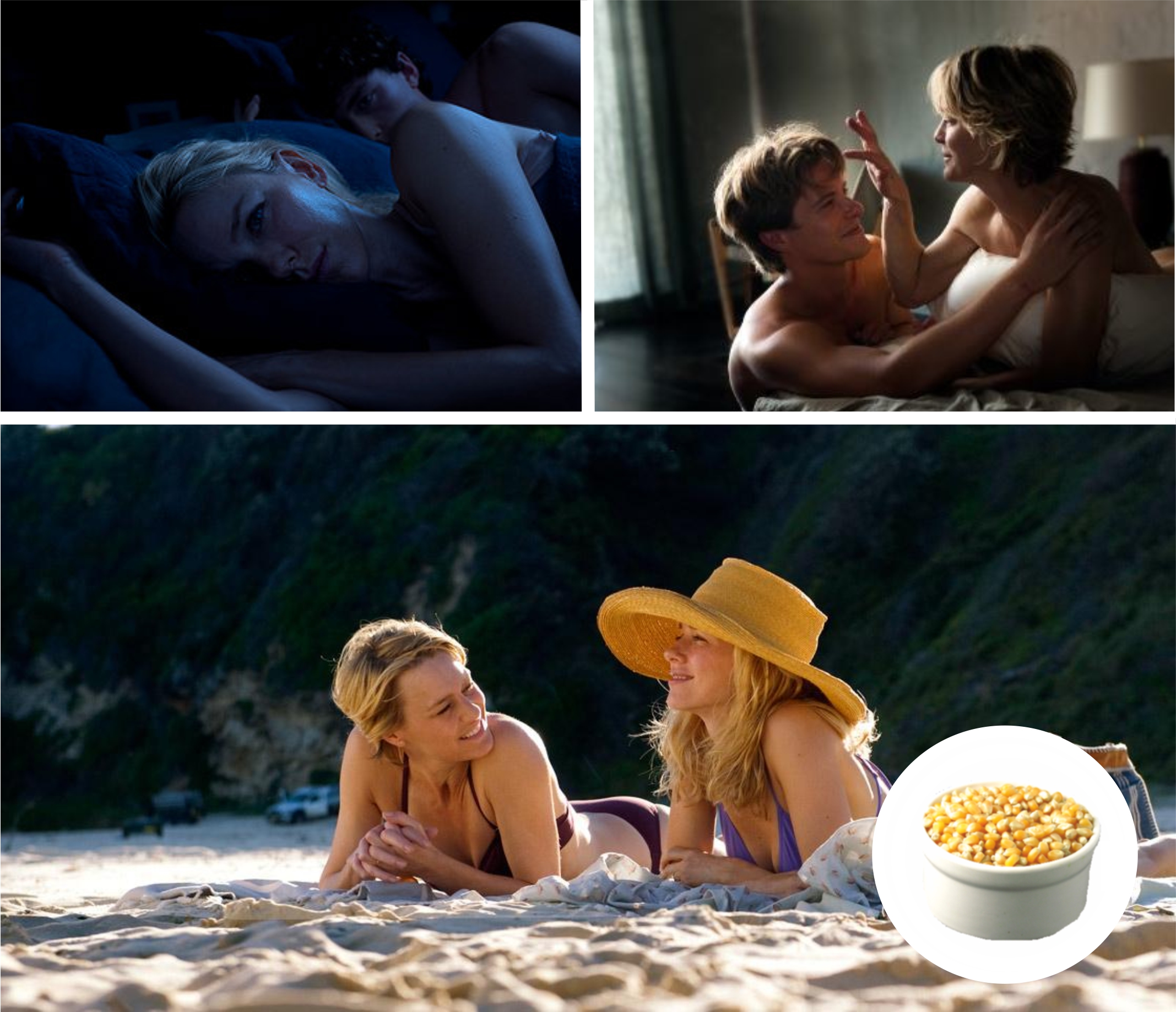 In addition to revamping my blog (I just can’t stop), which I do instead of studying like a proper student obviously, I’ve also been watching an unhealthy amount of movies. I won’t be able to write about all of them but as you can see, I’m definitely not passing up the opportunity to write about the controversial Adore. Mothers, their sons and each others lovers – it screams f*cked up and it is, but one just can’t stop watching and not just because of its gorgeous cinematography.

I discovered the other day that reverse Lolita movies are immensely popular lately, there’s The Lifeguard, A Teacher, The English Teacher and Adore. Older women with younger men in their early twenties (or even younger?) seems to be the latest indie-trend and I can’t say that it’s as disturbing as Lolita. There’s just something extremely creepy about an old man and a teenaged girl. Besides, Adore seemed to be the most out there among these reverse-Lolitas, and after watching it I’m pretty certain that older women with young boys creates less cringe but the judgement is still there.

So who do I judge, the horny sons Ian (Xavier Samuel) and Tom (James Frencheville), or the mothers, Roz (Robin Wright) and Lil (Naomi Watts)? Now, there are a lot of spoiler-ish factors that make me like Lil’s and Tom’s relationship a bit more but then again, the surprising Xavier Samuel was far more believable than Frencheville and I kept rooting for Ian and Roz to make to through. I’m not saying I approve these types of relationships but I was captivated by Samuel and his deep brown puppy eyes (which as a non-Twilight fan were new to me) enough to understand them past their age difference. I guess if you strip away the friendship factor between Roz and Lil, their relationships with these young men are somewhat justified but you add the family aspect and it just gets weird.

Eventually there were a lot of twists and turns with the plot, I can’t say that it made sense but it’s based on a book so I’m going to shift that criticism towards the novel. I guess it took things too far and since as an audience we didn’t see any aging happening in the movie adaption, it wasn’t as realistic as it could’ve been. Basically, I’m saying that Roz, Lil, Ian and Tom looked exactly the same though many years had passed. That being said, I want to point out that one of the most powerful scenes happened in the end of Adore between Roz and Ian – Samuel’s line delivery in that was just beautiful to me. Powerful, full of emotion and totally believable.

Robin Wright and Naomi Watts were good but I wouldn’t say that they were at their best. A lot of it comes down to the material so there’s just no way I could fault them on something that was off in the plot. Ben Madelsohn had a supporting role as Tom’s father that made complete sense and he was definitely a strong character in Adore. James Frencheville on the other hand was the odd one out for me, he just has that face that takes a while to get used to and eventually when you do, the movie is over. I don’t want to say he is ugly but with some actors that have so distinctive features, the role has to be bang on and I just never saw Frencheville as Tom.

Luckily the movie looks absolutely stunning and I think with a movie where the emphasis is on something that can be described as ugly, surrounding beauty balances it. Roz and Lil have raised their sons up in a paradise, there’s a lot nature porn happening and one of my favorite aspects of the movie, besides Xavier’s sad puppy eyes, was the ocean. It was clearly indicated that these two women saw the ocean as a sign of freedom and a hideout from everything else, it was their safe place. Later in the future it became apart of their secret, they could be themselves out there while everywhere else they had to pretend. And though the relationships between the two women and their sons were always complicated and sometimes a bit too far fetched, all four had a pure connection to the ocean and I can relate to that. I love everything to do with water, especially the ocean, and it was delightful to see that element used in so many beautiful ways and intertwined with the storyline.

In the end though, the cinematopgrahy wasn’t the only thing that kept me watching Adore. Samuel was definitely a reason why I didn’t take my eyes off the screen as well but it wasn’t just that. There is something smart about Adore, the way it is presented and acted, the oh so wrong relationships that just suck you in. I admit, there are so many little things that I can personally fault in Adore and yet, it did captivate me and even though at times I was in disbelief, I was still made to believe. So maybe I had been away from movies for too long, but I kinda liked it and I might be the only one but I’m not sorry.