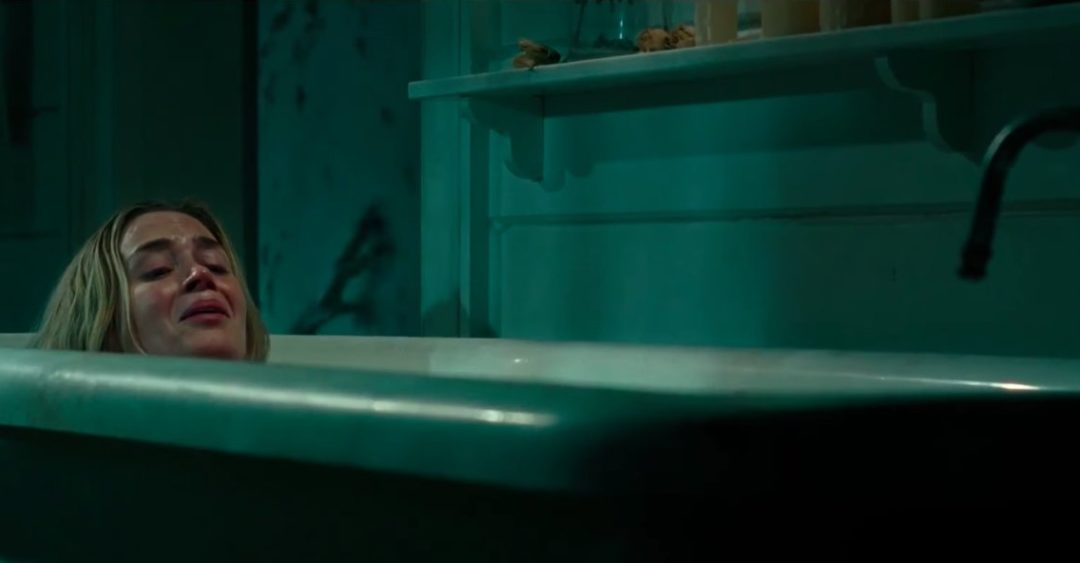 Will A Quiet Place do the same for horror in 2018, that Get Out did to horror in 2017? Some say yes, other say no. For me, by adding layers upon layers to a genre that I have stayed away from, both movies have changed my perspective on horror films and what that this genre could really do.

There are certainly other and bigger affects Get Out and A Quiet Place have had on the horror genre, but as I said, horror is still a relatively new territory for me. So instead of talking about it from a broad perspective, I’m simply viewing it from mine. Because for a few years now, I have slowly dabbled in horror. And I have been so damn lucky with what I have seen so far.

The change for me came with It Follows. A horror movie that made the terror very personal and confined in a very specific space. Yes, it still had very strong connections to horror classics even I have seen, but it added its own twists. Then came Get Out, which changed my perspective on horror completely. Turns out, it’s doesn’t have to be about jump-scares and clichés, instead it can evoke a conversation about important issues society is facing. A Quiet Place, while infuriatingly angering at times, pushes the boundaries even further by evoking various emotions. Which means, I can now officially say that I have felt joy and also cried during a horror movie.

That being said, A Quiet Place, which has already received a lot of praise, is not a perfect film. I want to state this right off the bat, because I will get into a few rants later on. But these rants are actually the reason why I pumped my initial grade up from 4,5 to 5. Why? Well, because I realised my rants were strongly powered by empathy. I truly care about the entire family in A Quiet Place, and that sort of motherly need to protect these characters, these people, also makes me angry at them. But before I get into the rants, let’s discuss the plot, the characters, and a little about the spider-like-monsters.

“Who are we if we can’t protect them?”

Set in a dystopian world where deadly creatures have taken over the world, some people have managed to survive by being quiet. Because making a sound will tip off the monsters, and you’ll be dead in seconds. A Quiet Place follows the Abbott family, the parents Lee and Evelyn (John Krasinski and Emily Blunt), and their three kids, Regan (Millicent Simmonds), Marcus (Noah Jupe) and Beau (Cade Woodward). The movie begins 89 days into the invasion, which we never see and I’m glad. The movie opens with an entire family outing, because Marcus is apparently sick and needs medication. The first sequence ends with the youngest kid Beau being ripped away by one of the creatures. And the timeline throws us further into the future.

Killing the youngest child is a bold choice but a necessary one. The world is dangerous and every mistake can cost you your life, or worse, the life of your child. From that loss, the movie sets a very melancholy tone to itself, where the tension is even heavier because of it. Lee and Evelyn have already lost a child, and yet they still continue to fight for their lives. Through one very horrible moment, an entire foundation of emotions is laid out, and that is just the start. We do not actually know what happens with them right after the loss of their child. Which is why we don’t know why, how and for what reasons do Lee and Evelyn decide to have another child!? Is it grief that leads to such a reckless decision? Is it by accident? We will never know for certain.

By far the strongest character in the movie is Evelyn, portrayed by Blunt. No offence to Krasinski, but his wife is a scene stealer, and I think he fully embraces that. Having Krasinski behind the camera, and Blunt in front of it, sort of sparks another layer of magic to the movie. They are married in real life, so the subconscious decision to root for them is immediate. It simply doesn’t take much character development to set a foundation for their relationship, it already exists in our minds.

Anyway, Blunt’s character goes through a lot in this film, including stepping on a nail! I swear, that was the only time I hid behind my fingers during the movie. The moment when she pulled herself free from that nail, I just couldn’t even handle the thought of that visual. There are many great moments in the film that highlight Blunt’s acting skills and I hope she gets recognised for her role here. She truly shines, even while being sweaty and in utter pain.

“Your father will protect you.”

Krasinski is good here too. So are the kids, especially Millicent Simmonds as Regan, who is a deaf actress. Her casting is very special here, and because her character is deaf, the representation here is admirable. If I had to rant, which I sort of promised to do, I’m going to do it in regards to the writing. A Quiet Place has a great premise, the cast is amazing, the direction is spot on, the sound editing is spot on, yet I was still annoyed. There are holes in the script, and considering the script at the start literally had just one line, there shouldn’t be any mistakes. Though, I think “holes” is not the correct term to use. These are more like unanswered and unexplained creative decisions.

Essentially what bothered me the most was the fact that I figured out the weakness of the monster even before I saw the film. I thought that maybe they will find another way out of it but of course it had to do with sound waves. It makes complete sense to be able to weaken a creature with exceptionally good hearing by interrupting its hearing. But I would have preferred the movie to come to that conclusion a bit earlier, because that amount of time should have given them answers. But maybe that’s just my annoyance because if they had figured it out sooner, Krasinski’s character would have survived. Which brings me to rant number two.

WHY!? WHY kill Krasinski’s character? It’s so unfair that he had to die that I wanted to hit someone. And having him do so while saving his kids, one of who turns off the device that could save her father? Anger doesn’t even come close to what I felt towards Regan at that moment. And that bothers me, because I should care for Regan too. Instead, I care a lot about Krasinski’s character, and think Simmonds’ Regan is just an annoying teenager. Is it fair that her father dies because she decides to leave her heavily pregnant mother alone? Is it fair that she finally figures the weakness out 10 minutes later but it’s too late? I just have a lot of feelings about that, and it was like watching Steve Trevor’s Wonder Woman scene all over again. Painful because it didn’t have to happen and I don’t accept it.

Eventually I was able to look past the frustrations intertwined into A Quiet Place’s plot, and thoroughly enjoy its contribution to the horror genre. There aren’t many movies that manage to make me emotional, there are even less horror movies that do the same. The casting is spot on, and the direction is clear. Visually the movie adds a lot to its plot. I especially enjoyed the elements that worked because they were plot driven. The soundtrack though, hot damn! The original music combined with silence was definitely the highlight of the film! So in other words, there is a lot to love about A Quiet Place, and I loved pretty much all of it.