After I watched all my shows: Game of Thrones (finale), The Killing (almost finale), Continuum (new show) and Teen Wolf (season 2 premier), I was bored and I did what I usually do when I am bored, I watched Avatar. I know, I know, typical USA hero story with a lot of CGI but I still like it and I watch it now and then just like I enjoy Star Trek. Those two are like my go-to adventure movies. Adventure, that’s a nice word, you probably saw it on my header image as well. (What a sleezy move from my part but I don’t care.)

Yes, I again had a little nick and tuck regarding the outlook of my blog: a new header was created by my not so talented Corel skills. Kept it simple, added a little color based on the suggestion, made the background black because the blog was too white (I like white but I guess it feels a bit better now) and I designed, probably over using that word like a lot, a new logo. “mr. Movie Blog” – I think it was accidental that my blogger alias happened to have initials MR, which also means “mister” (like it wasn’t obvious enough) but I think it is clever and witty to use it now. I am not a mister, but I do think that making myself more masculine is like a personal joke on my expense because I am a bit of a tomboy.  Just a regular girl, who loves beer, video games and occasional sports, without the boyish haircut and clothing style.

Anyway, let me know your thoughts on the new look, because I am kind of liking it right now – I also tried without the words listed below the logo but it felt a bit empty. Besides, it clarifies the whole “movie blog” thing and as you can see, no horror in the list. That was a planned move because there haven’t been many (and no plans to include some) movies from that genre and I just didn’t see myself adding that word just because I did a horror movie poster post. Besides, most important words are all there and I’m all out of room. Wanted to put TV there and then decided to but Cinema as well, but still kept it alphabetical so I wouldn’t have the problem of prioritizing. Wow, I was all about the simple today good for my complicated life I guess – reality is messy but the blog is neat! 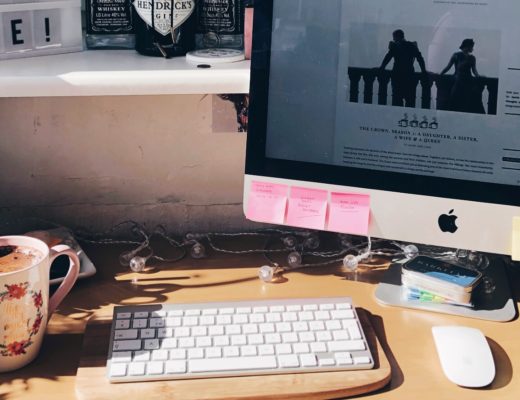 Trip Down Memory Lane: 8 Blog Posts From 8 Years of Blogging