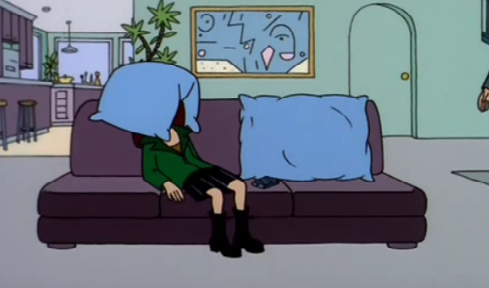 Sometimes I really need to let out some steam and this just happens to be one of those rare moments. Alright, it’s not that rare but I hardly ever write about things that annoy me or things that I just hate because I’d rather focus on the things that I love. This, as I already hinted, is not a day for love and celebration, this is a day to bash and destroy some current and past television related things that annoy the shit out of me!

First things first I’m a realist and these things are not in any particular order.

As an annoyance that is directed mostly at me, I’m a little pissed at myself for loving Friends so much. There’s just the fact that the bar for sitcoms has been raised so high, that no newcomer could ever really be as amazing. Memories that I have with Friends are forever and the jokes, the humor, the characters, all of that is timeless. I’m also annoyed that I can’t seem to connect with any of the comedy shows with the level of commitment and admiration I have for Friends. Sure, I watch and like Modern Family, but I’ve rewatched Friends so many times I know the episodes by heart and I will watch them again and again while resiting the lines. I’m annoyed that Friends was so good.. annoyed that I miss it so much at this very moment.

10. Long live Supernatural… or maybe not

When I started watching Supernatural, 10 years ago!, it was love at first sight. Before this show, I never realized that the Winchester brothers, manly hunters of all things supernatural, was exactly the thing that was missing from my life. It kept being one of my favorite shows, the story line kept progressing and developing, having a solid connection throughout seasons until it all ended in an epic showdown in season 5 finale. It was supposed to be the end… but the show had developed such a strong fan base that nobody really wanted to say goodbye to Supernatural. It’s 2015 now, it got renewed for season 11 and my reaction was far from a positive one. Enough is enough guys, stop before it becomes a TV cliché it is destined to be if it keeps going like this.

This is a bitter sweet memory to write about because One Tree Hill happens to be one of my all time favorites, sort of. The thing is, I only mention the first 4 seasons when I make that statement and maybe, maybe, when I’m feeling generous, I add that the 5th one was almost like a summary to its greatness. Then it was crushed by the most outrageous storyline with the crazy nanny Carrie and in that moment I lost all hope. There were signs before, sure, but that plot was when I gave up and as I never made it past the 7th season, it really goes to show how a single character can demolish a show that for four years meant the world to me.

Here’s a show that I wouldn’t mind watching for 20 years.. if it didn’t make such bad casting decisions season after season until completely ruining it with Jennifer Love Hewitt. My apologizes if you like her but I don’t get it, she can’t act and though I tried, I couldn’t really force myself through it. A shame really because I really loved Criminal Minds and I still do, deep down, but with so many ups and downs during the past three or four seasons, I can’t really keep at it. There’s too much great TV out there so there’s no point passing time with mediocre shows anyway. That and I really can’t stand Jennifer Love Hewitt, I just can’t!

From the very beginning, I had a heavy dislike towards Bonnie. Now, I kind of like her even and I can’t wait for her to return. So yes, I’m still watching The Vampire Diaries and I can’t help it, it’s addictive and I must stop but there’s a new psychopathic killer in town and I’m hooked! But as Bonnie is no longer my #1 enemy, I have to project my hate towards another character who has become the most irrelevant character in the entire show – Tyler Lockwood. He has no purpose, he just runs around like a dog, humping things and trying to prove something while nobody cares. Matt Donovan is more relevant than Tyler because he at least has the purpose of being the only human in the entire series who hasn’t been anything but human! You go, human Matt, show those supernatural friends of yours what a human can do (or not do).

6. So orange, she is so orange

With a Gilmore Girls vibe, Hart of Dixie came into my life in such a right time that I’m actually thankful for it. And though season after season it gets worse and worse, and character developments are butchered beyond repair (poor Wade!), I still watch it because I care. Then again I can’t really manage myself to care for an orange person which is what Rachel Bilson is in the beginning of the fourth season. Granted, she is pregnant, possibly during the filming of the current season, so I’m assuming the tanning bed visitations weren’t allowed but why make her orange? I get it, she needs a tan for the show but orange!? If you can’t give her a tan without making her orange, skip the damn thing completely!

Misfits was the show that I went into knowing that I wasn’t going to be disappointed, and I was right to feel that way. It was a solid show for three seasons but then it just fiddled away quietly like it was never there. Granted, the first two seasons were the strongest of them all, featuring Robert Sheehan as the comic relief on fire every time he was on screen. The third was a very nice addition to the show, but when Iwan Rheon’s departure followed Sheehan’s, things started to annoy me. Characters were mediocre, the chemistry was no longer there and the glory of the first three seasons put too much pressure on the fourth to ever really matter enough. That hurts but most of all annoys me a lot cause it was a great show and now I have to live with the fact that it didn’t end on a high.

4. Love will tear us apart

Three shows fall under the category of love tearing me far away from the shows featuring said love – Bones, New Girl and now, unexpectedly, Castle. This situation bothers me a lot but it’s inevitable in a way. When you bring two main characters together at last, things sort of cool down and you loose the tension between these characters, the tension that makes you tune in each week. Bones lost it very fast, New Girl played around with it too much until it broke it off and ruined it completely, and Castle, fizzled out unexpectedly. It annoys me when two characters aren’t together but it’s a good annoyance which needs to be there even after a happy ending!

Who is to blame here? Please, somebody, tell me who is the guy or woman who I have to send a hateful letter to, responsible for this monstrous act of torture? Showing us a glimpse of Jeffrey Dean Morgan, hot and ruggedly, strong, manly, powerful, an embodiment of a man, and then replacing it with Dermot Mulroney!? Sure, I like Mulroney on his own quite alright but we all know who he was really supposed to be, he was supposed to be Jeffrey Dean Morgan! Somewhere is a person who made a mistake in this whole situation and I want to know who it was because I’m forever annoyed by the fact that I could have had a brilliant performance by Jeffrey Dean Morgan on Shameless… but I’m now watching Mulroney trying and not achieving to be as manly as Jeffrey Dean Morgan!! (Can you tell I really like Jeffrey Dean Morgan?)

Truth to be told, I could write a post about 10 Things That Annoy Me About Shonda’s Shows and I would have a three part trilogy up by this time tomorrow. Seriously, this woman can write but this woman can annoy the hell out of me at the same time! First up, Grey’s Anatomy and the whole kill-fest which not only killed Jeffrey Dean Morgan but also Scott Foley and then followed by Lexie and Mark. I gave up by then but apparently Shonda learned a lesson and didn’t kill Yang but I’m sure she wanted to. Secondly, Scandal. Where to begin, Shonda, where to begin. There’s no hope for that show anymore, it’s long lost its power and it butchered Scott Foley yet again, this time, character wise which was even worse than killing him.

1. Let’s shoot an arrow through Laurel

If this list would be in an order, which it isn’t but if it were, Laurel from Arrow would take the first prize because there has never been a character more deluded and wrong for TV than her! Hating her has been easy because she is so stupid I can’t even think about it. Her current plot is even more stupid and I’m going to tell you why Laurel is such a bad character – Katie Cassidy can’t act. That’s it, that’s the reason why Laurel never had a chance, Cassidy is so unnatural on screen it actually hurts my eyes to witness her attempts to be bad ass in her new getup. Disliked her from the beginning but that has turned into a much deeper feeling of hate by now. Seriously, it’s time to go Cassidy, time to do soap operas and guest appearances on Bold and the Beautiful because you’re making the Arrow look bad!