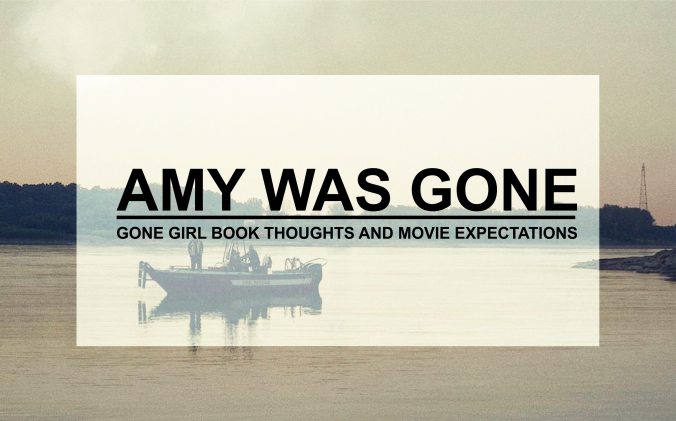 When I heard David Fincher was going to direct Gone Girl, based on a widely acclaimed book by the same name, I was slightly overwhelmed. My love for Fincher has been fundamental these past few years so I thought I’d shake things up a bit by reading the source material of his upcoming thriller starring Ben Affleck and Rosamund Pike. This is not going to be a book review but I must emphasize that my excitement for Fincher’s Gone Girl is slightly driven by my knowledge of the story.

Without giving anything away, it is almost impossible to talk about Gone Girl’s power which becomes most evident in the second half of the book. I myself was anticipating a similar twist, it is rather obvious considering the way the story starts off, pushing it even too hard at times because we all know multiple crime-twists and it felt like one of those twists. That aside, the second half was simply wonderful, it was better than I expected and I kept thinking how amazing it will play off on screen. It has potential, serious dark and eery potential, which in Fincher’s hands will explode! Considering that the book has a lot of past intertwined with the present and there are also time-jumps in the end of the book, I think it definitely helps to build up the story and characters. Plus, the screenplay is written by the author of the book, Gillian Flynn, so I’m sure she will do her own work justice when it comes to the writing.

Right after Ben Affleck was cast as Nick Dunne people started to complain – at least that’s what I remembered when I begun to imagine Affleck as Nick. Then, couple of chapters later, I was convinced Affleck was the right choice. Now, if you think Affleck is an odd choice, well trust me, Nick’s character is odd enough as well. He is never the hero, he is always too weird and seems suspicious, he feels weak at times and then again, he possesses a certain factor of anger that makes you wonder. Yes, there could be number of actors who would be able to do wonders with Nick Dunne but the fact that it’s Ben Affleck doesn’t scare me, I think he is a fine choice.

Now, Rosamund Pike as Amy Dunne is a completely different kind of choice – it is brilliant! There is nothing else about Gone Girl that can come close to the excitement I have in regards to Pike as Amy. There will be awards, there will be praise, there will be so much talk about how good she was because I believe she can do it! The sad thing is, I can’t tell you why I’m so excited, because I promised this post to be spoiler free, but for those who have read Gone Girl, I mean, am I right or am I right?! Just to be certain, I’ll watch Pride & Prejudice the day before I see Gone Girl because I want to be ready for Rosamund Pike and all her glory!

Whilst on the subject of actors, I want to mention that I can’t help to rejoice to see Neil Patrick Harris as Desi. Not because of the character but because of Harris who deserves more movie roles. Enough with TV, I want to see Harris on the big screen and a lot of him! That being said, Desi’s role does have a certain appeal but I’m not sure how the movie will emphasize his role enough to stand out more. I mean, he isn’t shown in the trailer at all, which is understandable as Desi wasn’t as involved in the plot of the book but yet, he does have a certain appeal in the beginning of the story as well as in the end. There’s something there, I know it.

Speaking of the trailer, seeing that already great looking cinematography by Jeff Croneweth is so reassuring and I’m not surprised, he has worked with Fincher multiple times, including Fight Club. This is a good choice, this means Gone Girl’s clashing of tones will look great, as they do in the trailer as well. Like I said, there’s something eery about the second half, but the first half has some so called bright moments which means there should be a combination of soft and cold tones throughout the movie, which we might see more in the flashbacks but who knows, maybe it will be the kind of soft dark Fincher seems to use a lot in his movies. I’m still secretly expecting a sort of soft-cold collision of imagery but I’m already sure I’ll love it no matter the tones!

As I’ve talked about the good, I’m going to mention this one thing that is sort of a spoiler as well – so DO NOT READ THIS – otherwise I’ll spoil it for you. Hopefully those who continue reading are willing to accept the fact that I’m giving them information regarding one of the twists, it’s sort of a big one, at least I assume it to be a good one in the movie – Nick Dunne has a young little thing aside, in other words, he’s cheating on his wife. Emily Ratajkowski is the actress who gets to play this girl and well, I’m not excited at all. Not because she doesn’t have a lot of experience but because I can’t imagine her as Andie, I simply can’t. For some reason, Kate Mara popped into my head the whole time I was reading the book and it might be because she already had a thing with Kevin Spacey, which means she likes them old, but also because she feels like Andie to me. Who knows, maybe Ratajkowski will be good but at the moment, I’m not feeling this casting choice.

Back to the people behind the scenes, I’m excited about Trent Reznor who’s responsible for the music. The reason he attracted my attention was the following quote he gave about Gone Girl: 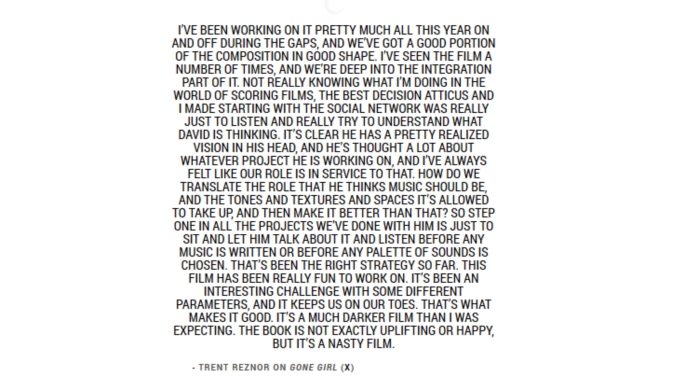 That just screams awesomeness and this coming from a person who doesn’t necessarily comment on music as much but I do appreciate it when it’s so good that you can’t help to notice it. And since his last collaboration with Fincher was on The Social Network, I know I’ll notice the Gone Girl soundtrack as well. Considering the tone of the book, I’m thinking, like Reznor said, it’s going to be dark and that excites me a lot!

When it comes to scenes in the movies derived from the book, I’m anticipating a very powerful IT scene, the one that will flip the whole movie upside down, as it did the book. The difficulty is to have that scene in the right place, not too soon and definitely not in the middle, as it was in the book, because after that, the book kind of slowed down and I wouldn’t want that for the movie. This scene is very important, it is the kind of scene I expect people to gasp after, if Fincher does it right, and oh, I’m pretty sure he will do it right, it will be the kind of scene one watches over and over again.

In addition to the scene I mentioned, the twist, there’s another story line that I liked in the book and it was its treasure hunt.  You see climpses of it in the trailer, Clue One is just the beginning and it’s such a cleverly thought out detail in the book. Considering how it was intertwined with memories of their past together, I’m half expecting it to be the center of the story, the element that has everything else wrapped around it. Then again, it’s hard to predict what Flynn was thinking when she wrote the script, was she following the uneven timeline or was she thinking outside the box and moving things around. I really hope she moved things around because I’m not 100% keen on Gone Girl’s timeline appearing on screen as it was in the books. You would think keeping the integrity of the book alive and sticking with it step by step is the way to go, but in this case, I don’t think it is. Some books just need a bit of a boost, a bit of messing around with the order for it to translate successfully on screen. That being said, I’m sure that even with the shaky timeline, Fincher will do an amazing job.

Finally, something that Fincher’s movies have always had in common, in addition to his great direction, are the unique opening credits! Now, don’t get me wrong, all his movies have had a different feel to them but I mean, the kind of title sequence I’m looking forward to in my mind is something similar to Se7en (there’s an intro post coming soon)! Dark, creepy, sort of scary and definitely interesting.. maybe the treasure hunt could be somehow incorporated into it – my imagination is just running wild today! The thing is, the opening credits are most likely the first thing we’ll see, the first thing that will grab our attention and I want it to be good, if not amazing. The cover of my Gone Girl book copy was rather great itself to be honest, it was black with neon orange letters and one could see locks of hair as well, most likely Amy’s: not going to lie, I do choose a book by its cover sometimes. I don’t necessary choose my movies based on their opening credits but I mean, great opening is always an added bonus I don’t mind getting!

Man, I’m so excited for Gone Girl? Are you excited as well?